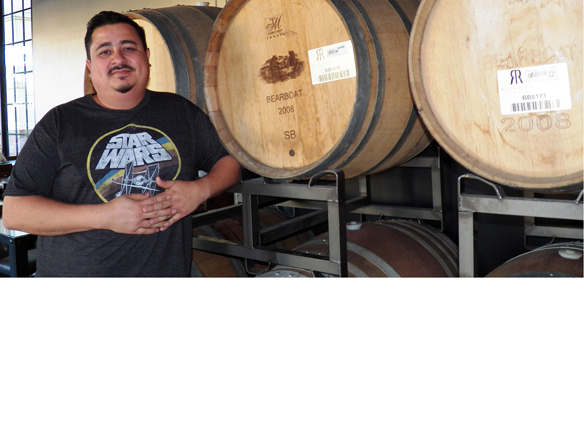 Alex Carballo, co-founder and operating partner at URBN recently spoke in an interview about his background and experiences doing business in East County and beyond. Carballo further discussed how his year-and-a-half old fledgling enterprise is branching out from its El Cajon roots.

Carballo had been applying his executive chef expertise with Stone Brewing in North County from late 2008 until July 2013. But he has lived with his family in La Mesa for the last six years, and he noted the wide-open possibilities at the empty site of a former brew house restaurant near the corner of Main Street and Magnolia Avenue.

The urbn St. Coal-fired Pizza and Brewery restaurant staged its grand opening in fall 2014, as a dining venue added into the urbn group of restaurants around the county, which Jon Mangini established with downtown San Diego’s BASIC Urbn Kitchen + Bar in 2006. However, it takes as its official anniversary the date of its “soft opening” in the summer of 2014.

Carballo, reacting to the comment from Mayor Wells, said that being mentioned was “awesome,” and moreover that he is happy to be part of bringing people into downtown El Cajon.

“This is not just about my business but about being part of the community,” he said. “El Cajon has a real small town feel, with a lot of great mom and pop shops. Friendly business is always better, and even friendly competition. Other stores opening up in the area is another very good sign.”

Carballo attributed success to the combination of both food and beverage sides of his restaurant’s operations.

“The craft beer industry here in San Diego County is a big part of what we are doing,” Carballo said. “This is not just a trend but a driving force in the local economy and in hospitality businesses here. The culture of craft brewing encourages an artisanal factor in food preparation too. There are lots of opportunities in East County for businesses. The lower rent costs and sparse competition make this whole part of the county a more open area than downtown San Diego for starting a business that succeeds.”

And urbn st. in El Cajon is gaining attention outside East County. Later this month, on January 28, the restaurant’s brewer, Callaway Ryan, will represent urbn st., leading the beer portion as the invited brewery of a food-beer pairing event hosted by Eclipse Chocolate in San Diego’s South Park community. Three urbn st. craft beers will each be paired with a complementary artisan cheese and a chocolate truffle confected by Eclipse, for the so-called “Chocolate Threeway.” Carballo explained that this is new exposure, as urbn st. hosted a chocolate-beer pairing event on site in El Cajon.

Carballo elaborated on the toughness of the hospitality sector.

“Consistency and quality are controllable elements in food service. But no restaurant can be all things to all people. This is a very hard-to-do kind of business, and it has to be passion derived. The money doesn’t come fast for a new restaurant,” he said.

But that does not dissuade Carballo and his business partners. Next on their to-do list for business expansion will be a slated March grand opening of Moto Deli in Encinitas. Carballo described the venture as a new sandwich concept, in which “East Coast deli meets West Coast flair.” Sandwich breads will be fresh baked from the North County shop, and meats will be such specially crafted delights as pastrami and charcuterie.

Another promising development Wells listed in his State of the City speech is the recently started construction of a Marriott hotel, which will be within very easy walking distance of urbn st. Carballo is looking forward to that as well.

“Our place is open late, and we can give visitors who stay across the street a taste of what San Diego and El Cajon are all about,” he said.

Just when you thought it was over