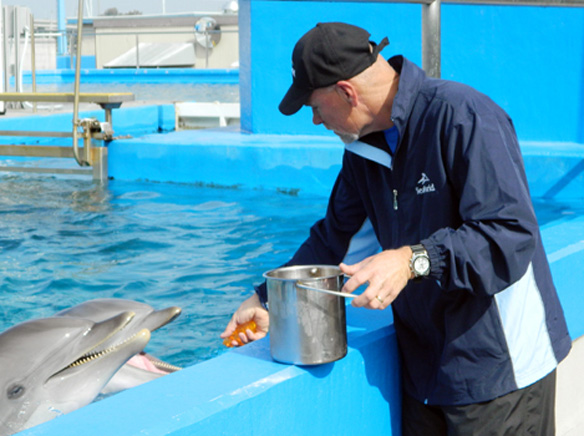 One might say that Kevin Robinson, 51, has a perfect job.

“Perfect” for those who love to work with aquatic animals in a atmosphere that allows someone to be their own boss. It’s not for everyone, but it sure has made this El Cajon resident happy since 1977.

One might say that Kevin Robinson, 51, has a perfect job.

“Perfect” for those who love to work with aquatic animals in a atmosphere that allows someone to be their own boss. It’s not for everyone, but it sure has made this El Cajon resident happy since 1977.

A senior animal care specialist at San Diego’s SeaWorld Park, he has always been fascinated with sea creatures, such as dolphins, walruses, sea lions, seals and others. First working at SeaWorld in Cincinnati, he received a bachelors degree in zoology from San Diego State University and has made caring for the beasts his life’s work.

“After working in Ohio for a while, I thought about maybe working for a zoo or an ocean research facility,” he said. “I came out to San Diego and was able to get a job at SeaWorld. It has become a really good fit.”

Working in the Animal Rescue & Rehabilitation Dept., Robinson and his staff are responsible for maintaining the exhibit, feeding and observing the animals. “We’re the eyes and ears of the veterinarians, sort of the a first filter, if you will,” he said.

Robinson is also amazed (even after years of working with these seagoing mammals) how each has a separate and distinct personality. “It’s almost like watching a group of children on a playground,” he said. “They are more social and human-like that a lot of people realize.”

And while this part of the job is rewarding enough, Robinson’s favorite aspect is his involvement with SeaWorld’s Rescue Program. “SeaWorld San Diego is one of the few parks in the country that has the authority to rescue these animals from the federal and state fish and game departments,” he said. “I really love the rescue program. It has given me a real satisfaction to bring in and rehabilitate these animals.”

One of Robinson’s favorite rescue animals was J.J. the grey whale. In January 1997, the newborn baby whale (named J.J.. in honor of in honor of the late Judi Jones, a registered nurse who was the director of operations for Friends of the Sea Lion, an animal rescue organization based in Laguna) was found helpless near the coast of Los Angeles, California, just 14 feet long and weighing just 1,800 lbs. Nursed back to health at SeaWorld, she was released into the Pacific Ocean on March 31, 1998, at 30 feet long and 19,000 lbs. in mass. She also shed her radio transmitter packs three days later.

“We were involved in this rescue and it was a year that really brought a lot of attention to this park and our rescue efforts,” Robinson said. “It’s nice to get that kind of recognition, but we help a lot of animals that no one ever hears about. I get a lot of satisfaction out of these rescues and it’s one of the most rewarding aspects of this position.”

Robinson met his wife and moved to El Cajon in 1988. He has two sons both of whom attended El Capitan High School in Lakeside. “We loved their agricultural program,” he said. “Both of my sons are going to college because of El Cap’s ag department.”

For those youth who would like to become a SeaWorld’s animal specialist, Robinson suggests attending the facility’s summer career camps, intern programs or a college degree aimed at the animal psychology or behavioral science disciplines.

“A lot of people think it’s just working with dolphins and killer whales, but there is some basic care involved,” he said. “It’s a great job, but you have to begin somewhere, and that is basically at the bottom – and then work your way up.”