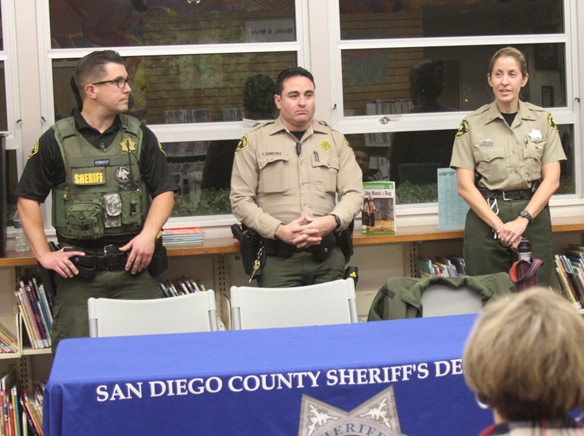 The Lakeside Library is not just a place to be quiet and read books. Important community meetings take place there as well, such as when three Sheriff Deputies, Jacob Sanchez, Doug Roydeon and Karen Stubkjaer, held a coffee with the Sheriff on Jan. 14. In a get acquainted meeting they kept guests spellbound with information about what they are doing in Lakeside, nowadays.

The Lakeside Library is not just a place to be quiet and read books. Important community meetings take place there as well, such as when three Sheriff Deputies, Jacob Sanchez, Doug Roydeon and Karen Stubkjaer, held a coffee with the Sheriff on Jan. 14. In a get acquainted meeting they kept guests spellbound with information about what they are doing in Lakeside, nowadays.

Lieutenant Karen Stubkjaer is the head officer at the Sheriff Sub Station that opened on Parkside Avenue in May. She came to the new Lakeside station three months ago from Santee and is a 20-year veteran in the department. She said when the officers were asked who would like to go to serve in Lakeside all the ones who raised they hands got to come. They wanted to provide human contact and get to know the people, “It makes us better at our jobs.” said Stubkjaer. There are four deputies working during the day and five working nights, they work 12-hour shifts.

The new Sub Station is small on the inside, making the officers communicate more, and in turn sharing information about various crimes, which might not happen if they were in larger quarters. Proposition 47, which decriminalized many crimes created challenges for the Sheriff Deputies but overall the crime rates in Lakeside are down 14.9 percent and property and violent crimes are down as well, this is attributed to the patrol deputies information sharing.

Two deputies investigate special operations such as illegal drug dispensaries. There are three illegal dispensaries in town. The deputies investigated the operation and have given a “cease and desist” order to the owners for operating an unlicensed business. Code Enforcement has to get involved to close down an illegal dispensary and it is a long process. One “Smoke Lounge” recently requested an alcohol license and it was turned down by the Lakeside Planning Group.

The proliferation of derelict motorhomes parked along public streets was a concern to some citizens. The Sheriff deputies said that parking for 72 hours is legal, but longer than that should be reported to the Highway Patrol.

Lieutenant Stubkjaer, is proud of her Homeless Outreach program, she started it in Santee and brought it with her to Lakeside. She said that one day a week the deputies go out to the homeless camps and ask them “What do you need to get out of this situation?” It is a long-term program, and Lakeside is the only community that has it. “We can’t arrest ourselves out of the problem.” she added. The homeless are considered to be a danger to kids and equestrians along the trails.

Terry Burke-Iserling, the “mother” of the Skate Park, said that she feels much safer walking in Lindo Park now, but would like to see the reserve bicycle patrols come back into the community. There is extensive training that goes with the bicycle patrols and that is why they have been discontinued.

Karen Ensall, a Mounted Monitor for the Lakeside River Park, said that she and others wanted to become horse patrolmen for Lakeside Sheriffs, but were discouraged because of the extensive background checks and they were told they would not be stationed in Lakeside, the community they wanted to serve in. She asked Stubkjaer if she could cut through the red tape for the equestrians.

Crime Prevention Specialist Holly Angeles said that she is publishing a monthly newsletter tailored to East County issues and concerns. She focuses on community outreach and neighborhood watch, business watch and local events. You may call her at 956-4021 to discuss these issues. The non-emergency phone number for the Lakeside Substation is 938-1370.

For the love of Samantha

Genetically modified organisms is a battle between health and profit