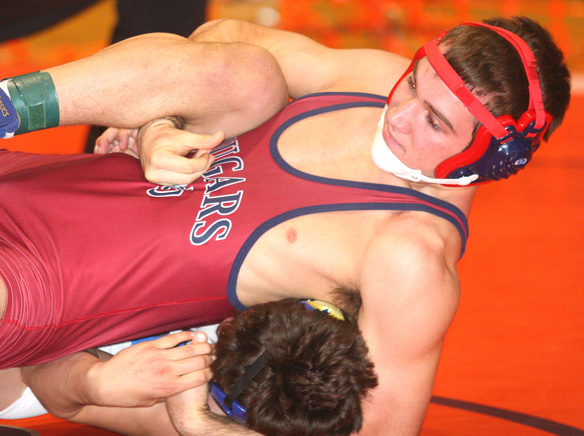 Forman finished the two-day tournament that concluded Saturday, Dec. 21, with a 5-0 record that included four pins (two in the first period and one totaling just 28 seconds).

He recorded an 8-3 victory against Temescal Canyon’s Ricky Bonilla in the championship final that was streamed live on OrangeNationTV.com.

“I call that type of wrestling funk-style,” explained Forman, who extended his season record to 17-5. “It works for me. It’s helped me in the past and I’m sticking with it.”

Forman, who finished fourth at last season’s San Diego Section Division II championship tournament and sixth at the San Diego Masters state qualifying tournament, was one of four East County wrestlers to advance to the finals of this year’s ECI tournament and one of two champions.

Shlemoon finished 5-0 with three pins and two major decisions to improve to 16-1 on the season. He previously won his weight class at the Carlsbad Invitational on Dec. 7 and finished third at the 45-team La Costa Canyon Jimmy Hamada Classic Dec. 13-14.

The Braves grappler handed his ECI championship round opponent his first loss of the season.

“Top five at state,” Shlemoon noted of the goal he set for himself this season after placing second at last season’s section Division II championship and fifth at the section Masters state qualifying tournament. “This shows I can do better and go to the next level. It’s all about toughness out there, giving 110 percent.”

Alcaraz, seeded third in his weight class, upset second-seeded Vincert Parra of Northview by a 3-2 decision in the semifinals before dropping a hotly contested 2-0 championship round match to top-seeded Dustin Miller of Escondido.

Alcaraz finished 4-1 in the tournament with two pins and an 18-3 victory by technical fall.

Steele Canyon led all East County teams in attendance with a sixth-place team finish. The Cougars walked off the mat with five medalists.

“We have experienced wrestlers at a lot of spots – we’re coming together step-by-step,” ECV coach Jim Castle said. “We have a senior-loaded team, we just need to keep wrestling. We have a lot of work to do but everything is coming together.”

This year’s tournament marked the first time in more than a decade that the ECI tournament was actually held in East County.

“I like it,” Grossmont’s Bell said. “I’m glad to see most of the Grossmont Conference schools here. It’s great thing to see the tournament getting back to what it was (in the past).”

RBV finished as the top San Diego Section team with 154 points in third place. The Longhorns had eight medalists and two champions.

Out of state teams included San Luis and North Canyon, both from Arizona.

Valhalla is off to the races with showcase prep cross-country