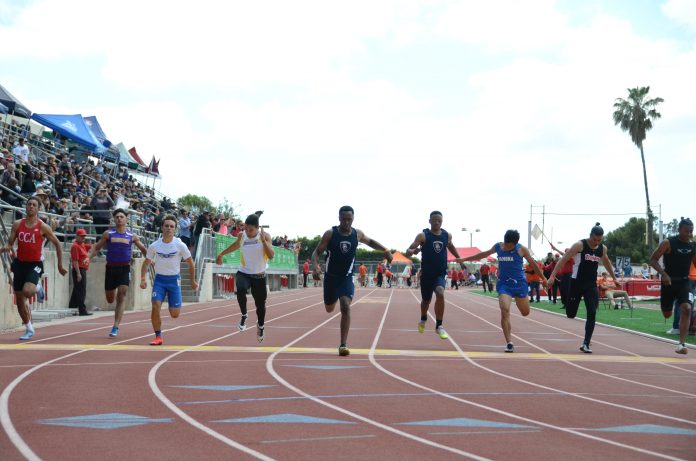 The United States Olympic team’s motto for the 2008 Summer Games in Beijing was “Amazing Awaits.”

With qualifiers in 11 events for this weekend’s California state championship track and field meet at Buchanan High School in Clovis, the Grossmont Conference might also want to borrow that tag line.

It is a noteworthy number for one of high school track and field’s biggest championship events.

The United States Olympic team’s motto for the 2008 Summer Games in Beijing was “Amazing Awaits.”

With qualifiers in 11 events for this weekend’s California state championship track and field meet at Buchanan High School in Clovis, the Grossmont Conference might also want to borrow that tag line.

It is a noteworthy number for one of high school track and field’s biggest championship events.

It all will unfold with the state prelims Friday, June 1, followed by the state finals on Saturday, June 2. A live stream can be accessed through www.cifstate.org.

The top three place-finishers in the A-heats qualified to compete at the state meet.

However, athletes in both the A-heats and B-heats competed for place-finishes in the Division I and Division II finals.

The weather conditions were perfect for competition, and the field did not disappoint.

The Helix foursome of junior Ty Sheridan and sophomores Gabriel Martinez, Nic White and Eric Parker timed a section-best 3:21.86 to win the A-heat in the boys meet-ending 4×400-meter relay. The Highlanders pulled away in the final 100 meters to top runner-up Mt. Carmel (3:21.87) and third place Olympian (3:23.09).

The Highlanders’ winning unit was quick to note that it is not done.

“We have one more year together,” Parker said enthusiastically.

Parker is also not done this season after qualifying to compete in Friday’s state prelims in the 400-meter dash after recording the third-place time of 49.11 seconds (a season best) in the A-heat.

Atuatasi finished runner-up in both the A-heat shot put (39-3) and discus throw (135-0) to emerge as the Division II champion in both events.

The sister dynamic has been fun to watch this season, said head coach Juan Naranjo, and it has had a positive influence on the team.

“The kids look up to [Brandy],” he said. “It’s inspiring to them. They admire how well she’s done and I’m sure they’ve stepped up their game as well. It’s been some good camaraderie.”

Naranjo said he expected to have a strong season with his sprinters, but Brandy’s performance on the team this year as a freshman was unexpected.

“It’s been kind of a surprise,” he said. “We didn’t know she was going to be this good, and she is our only state qualifier so far.”

El Camino senior Nu’u Tuilefano recorded the top section marks in both the shot put (40-2) and discus throw (139-8) as the Division I champion.

There were plenty of top marks to spread around among East County athletes.

Both throwers claimed the Division I title in their respective events.

Leber, the regular season section leader with a 171-2 mark, out-threw runner-up Shawn Poma (155-10), a junior from Cathedral Catholic, to win the event.

Three proved to be the magic number for Granite Hills’ Coleman after his third-place times in both the 110-meter high hurdles (a personal record 14.63) and 300-meter intermediate hurdles (39.02) allowed him to punch his ticket to the state meet.

This marks the first time he has qualified for the state meet.

“It worked out pretty good,” he offered in somewhat of an understatement. “My mind-set was to believe in myself and don’t back down when the competition got tough. It’s exciting to be able to compete at the state meet. I’m grateful to be able to race against such good competition.”

Valley Center senior Jeremy Clay turned in the top time at the section 110 high hurdles finals in 14.29 while El Centro Southwest senior Tyler Saikhon, the regular season section leader in the event, finished second in 14.36. Both times were personal bests.

In fact, the top four finishers in the race all turned in personal bests.

Coleman set a personal record with a time of 38.88 in the 300 intermediate hurdles at the preceding section prelim meet. He finished behind Rancho Bernardo senior Joshua Farmer (37.81) and Saikhon (38.75) at the section finals.

The event was highly competitive as six of the eight hurdlers in the A-heat finished under the 40.00 mark.

“I gave it all my effort,” Coleman explained. “I was tired, sore, weak in the legs. I just pushed through. I’m proud of all the other competitors; I’m also proud of myself.”

Burke finished as the Division II champion in the event.

Coleman also competed in the A-heat boys high jump, clearing 6-2 to tie for fifth in the state-qualifying field and third overall among Division I jumpers. His best on the season is 6-6, which tied for the regular season top mark.

Meanwhile, the Steele Canyon foursome of Jordan Anderson, Cullin Paisley, Javon Woodbridge-Mason and Marvin James Jr. finished second among section teams in the meet-opening boys 4×100 relay with a time of 41.91 to qualify for the upcoming state meet.

The Cougars finished a mere 0.01 seconds behind section champion St. Augustine (41.90) in a photo finish.

Both times rank first and second, respectively, in the section on the season.

Steele Canyon finished third in the Division I boys team standings with 53 points, followed by Granite Hills in fourth place with 45 points.