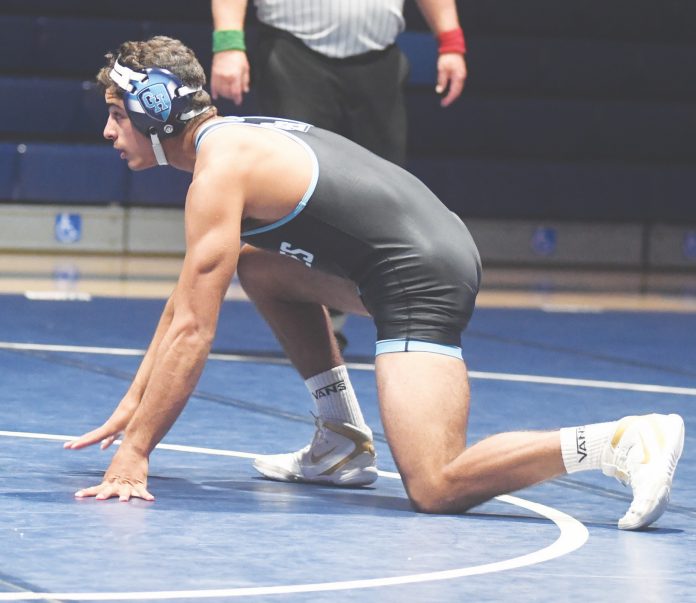 It was a memorable season for the five seniors — and everybody else — on the Granite Hills High School wrestling team during the recently completed 2020-21 season.

Coed competition continued through the conference finals before separating into girls (May 22) and boys (May 29) divisional championship tournaments.

She showed her dominance by pinning all three of her opponents in the first period to walk off the mat with the individual weight class championship.

“Kailey has locked down our 106-pound weight class the last four years,” Eagles head coach Jesse Sheard said. “Her dedication to getting better and winning is what made her so tough.”

All three grapplers finished as Grossmont Conference champions at the league finals held May 15 at Granite Hills High School.

Additionally, both Carroll (138 pounds) and Corella (152 pounds) finished runner-up in their weight classes as the Eagles soared to a runner-up finish at this year’s Division II finals held at San Pasqual High School.

He won the 145-pound title at this year’s conference tournament with a 59-second pin. He opened the division finals with a pair of first-period pins (1:13 and 0:59), then tacked on an 11-1 major decision in the semifinals to advance to the championship round.

He dropped a 13-8 major decision to Poway’s Johnny Lopez in the gold medal match.

“Justin has been a great asset to our team the last four years,” Sheard said. “He is a great kid who will be very successful in his life. We are definitely going to miss him.”

He won the 152-pound title at this year’s conference tournament with a 16-2 major decision. He won his opening three matches, including two by pins, to advance to the championship round at the division finals.

Corella lost by a 5:23 fall to Poway’s Anthony Ching in the gold medal match.

“Joel has been a big part of our team’s success,” Sheard said. “He is always ready to work hard and do what needs to be done for the team. Joel has had a good run at Granite and will be missed.”

Senior Izak Arredondo finished his career as an Eagle as a three-year varsity letter-winner.

“Having Izak in the upper weights was always an advantage for us,” Sheard said. “Izak was a hard worker who never gave up no matter the circumstance.”

Broc Ludeke, who also played on the school’s football’s team, finished his senior year with a 1-2 record at the division finals with a first-period pin while competing at 195 pounds.

“Broc was someone we could count on whenever we needed to fill a weight,” Sheard said. “The majority of the time being undersized, Broc would give it his all and do what is best for the team.”

Granite Hills advanced four wrestlers to the championship round, with sophomore Collin Guffey winning the 120-pound weight class with a 6-2 decision over Poway’s Paul Kelly.

Guffey finished 3-0 at the tournament with two pins.

Ransdell finished second in his 285-pound heavyweight division following a loss by a 1:33 pin to Poway’s Jamikael Lytle. The Eagle mat man opened the tournament with pins of 1:47 and 4:13 to advance to the championship round.

Granite Hills had a total of nine wrestlers earn place-finishes at the Division II finals.

Desean Floyd finished third in his 106-pound weight class with a 2-1 record that included a 27-second pin and 6-0 minor decision.

Ian Brown finished third in his 132-pound weight class with a 4-1 record that included three pins. His only loss was by a 17-2 technical fall to Poway’s Andre Gonzales, the weight class champion.

Zachary Waterhouse placed third in his 145-pound class with a 4-1 record after battling back with four consecutive wins following a quarterfinal-round loss to eventual weight class champion Nolan Tolentino of Poway.

Eight Eagles advanced as far as the championship semifinals.

Santana’s Liam Clark placed runner-up in the 220-pound division following a loss by a 51-second pin to Brawley’s Alan Carrillo.

Holtville emerged as division champion with 216.5 points while runner-up Imperial finished with 151.5 points.

Follow the leader, Highlanders should excel under new coach

Are you ready for some Thursday Night Football? Here come the Mount Miguel Matadors