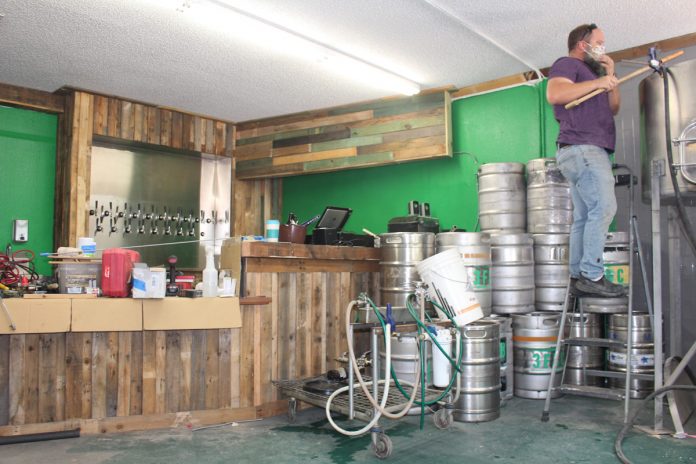 “We planned on having a big, grand opening.  We were going to brew 10 or 15 barrels of beer,” Lloyd said.

Instead, the three co-owners are gathered on a Saturday morning, brewing small batches of beer in anticipation of an early June soft opening, modified into takeout purchases for social distancing.

“Well, the timing is really the tough part. The three of us are working nine-to-five jobs and trying to open this brewery. We were set to open and then the shutdown happened,”  Lloyd said.

“It might actually be a blessing because if we’d had to open and then shut down, it might have been worse. At least this way, we get to open in a limited capacity.”

He explains that because the storefront wasn’t yet open when all but essential businesses were required to physically close their doors to customers, Three Frogs Beer Company does not qualify for any type of COVID-related financial assistance.

“Because we didn’t have income from the business yet, we don’t qualify for a loan and no employees had been hired yet so no payroll protection assistance. It’s made it really difficult to do anything.  Our landlord reduced our rent but if we don’t open next month, we’re going to be in trouble,” Lloyd said.

Zeferjahn says the experience has reinforced the need to be self-reliant.

“It definitely makes you think about making sure you have several months of rent in your account at all times.  Your safety bubble has to be a lot bigger than anybody thought,” Zeferjahn said.

He worries there is not a whole lot of money left after paying rent for over a year to get the business up and running.

“The fact that we didn’t have to open then close, well, this is just going to be upward momentum.”

Lloyd spreads his arms wide, taking in the expanse of the rental property, roughly 850 square feet of space and runs through the history of the brewing system while Anderson begins work on a small batch of beer, timed for the June opening.

“This is Manzanita’s old system. They obviously outgrew it, then it was Butcher’s, then Church, then it went up to a place in Ramona and now it’s come home to Santee,” Lloyd said.

He backs into the work area that will be off-limits to customers, opening and closing a rustic door with wrought-iron hardware and says it came from a home he and Anderson were refinishing as part of their day job in construction.

“Those gray tiles we got on clearance and the wood for the countertop also came from construction. Almost everything in here is repurposed.”

Zeferjahn says the brewing community is an unbelievably generous group.

“We got hundreds of dollars of free yeast today. We’re all trying to help each other get a bite of the pie. The great thing about the beer industry is that it’s always been collaborative,” Zeferjahn said.

Anderson leans out the window of the storefront and describes how they plan to use the small opening to hand off their craft brew to the public through an unplanned takeout window.