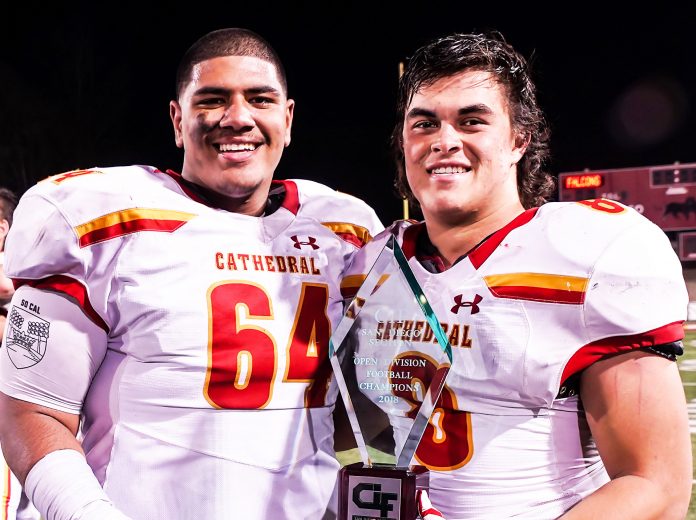 Playing in front of more than 8,000 fans, the second-seeded Dons overcame an early 14-0 deficit against the top-seeded Torrey Pines Falcons to post a 28-17 victory to collect their 12th section championship in their history and second Open Division title in the last three years.

Playing in front of more than 8,000 fans, the second-seeded Dons overcame an early 14-0 deficit against the top-seeded Torrey Pines Falcons to post a 28-17 victory to collect their 12th section championship in their history and second Open Division title in the last three years.

With the win, Cathedral Catholic advanced to the Southern California regional Division 1-AA playoffs against visiting Narbonne on Nov. 30.

The Dons defeated the Gauchos, 24-21, to advance this year’s California Division 1-AA championship game on Dec. 14 at Cerritos College.

Cathedral Catholic will take a 12-1 record and 12-game winning streak into the state championship game against the Northern California regional champion.

Folsom (12-1) will play at Central Fresno (13-0) on Friday, Dec. 7, to determine the Northern California representative.

The Falcons, one of only two teams in the section to post an undefeated regular season record, saw their perfect season end at 10-1 with the loss to the Dons.

This year’s Open Division championship game pitted what is considered to be the top two teams in the section. Both teams were big and fast, and the game was hard-hitting. It did not disappoint fans for lack of either drama or excitement.

“It was a tough win,” underscored Cathedral Catholic senior middle linebacker Nikulas Otineru. “They have a great running back. But our coaches prepared us. It feels good to get it.”

“We battled all through the game; we worked for this,” he said.

Both were playing close to home in the championship game.

Otineru entered the division final with a six-yard rushing touchdown to his credit in the school’s 34-14 Holy Bowl victory against St. Augustine on Oct. 5; he also had logged 60 tackles on defense.

Ulugalu-Masseuli was among the prime movers on the offensive line in the Dons’ 213-yard rushing attack in the final.

Senior Shawn Poma was the chief beneficiary of the Dons’ offensive line heroics. The five-foot-seven senior running back is among the nominees for KUSI-TV’s Silver Pigskin award, emblematic of the San Diego Section Player of the Year.

Poma finished the championship game with 178 rushing yards and scored three touchdowns. He broke off a 65-yard touchdown run with 53 seconds elapsed in the second quarter to put the Dons on the scoreboard.

The Dons outscored the Falcons 14-0 in a grinding, gritty second half.

Poma scored his second TD of the game with 2:07 left in the third quarter to put Cathedral on top 21-17. He caught a 38-yard scoring pass with 5:56 left in the game to effectively seal the win for the Dons.

“We made some adjustments at halftime,” said Poma, who entered the title game with 1,235 rushing yards and 17 touchdowns on the season. “We weren’t worried. We had been in similar situations before, so we knew we could come back.”

Despite Cathedral being seeded second to Torrey Pines, many observers felt the Dons were actually favored to win. Thus, when the Falcons took what seemed to be a dominating early two-touchdown lead, an upset of sorts appeared to be brewing.

Torrey Pines senior running back Mac Bingham, who is headed to USC on a baseball scholarship, scored both touchdowns for the Falcons. He capped an initial 80-yard scoring drive with a 39-yard breakaway run with 7:27 left in the first quarter.

After the Dons turned the ball over on downs at the 50-yard, he capped Torrey Pines’ next series with a two-yard run on the first play of the second quarter.

The Cathedral defense really made an impact in the second half; the Dons recorded three sacks to thwart Torrey Pines’ final drive of the game.

The Dons were among the six San Diego Section champions who earned a berth in the state playoffs.

Lincoln ran a wild comeback to defeat host Culver City, 54-42, last Friday. The Hornets will meet an undetermined opponent in the state final on Dec. 15.

San Diego defeated Linfield Christian from Temecula, 42-31, in come-from-behind fashion last Saturday. The Cavers will play at Colfax (13-0) on Dec. 15 for the state title.

St. Augustine and Morse both ended their seasons with losses in the regional playoffs.