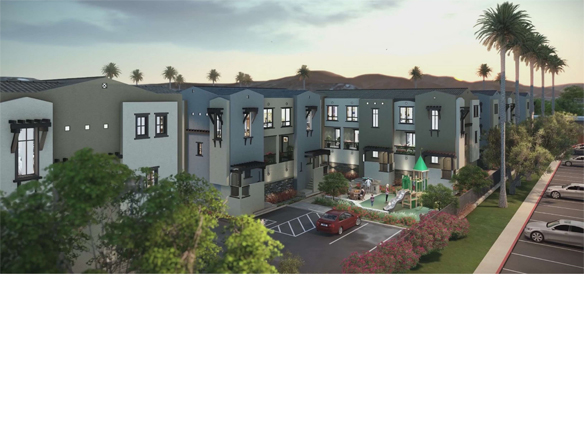 Finding a first home for many people in San Diego County seems like a pipe dream, but New Pointe Communities, Inc. focuses exactly on that. Bringing quality entry-level homes for single families at an affordable market price. President Scot Sandstrom believes that this biggest need in the county and is now building a small community complex in Santee.

Finding a first home for many people in San Diego County seems like a pipe dream, but New Pointe Communities, Inc. focuses exactly on that. Bringing quality entry-level homes for single families at an affordable market price. President Scot Sandstrom believes that this biggest need in the county and is now building a small community complex in Santee.

Montivo, located near Santee Trolley Square is an 18-condominium project in a townhouse configuration.  With a little more than 1,300 sq. ft., each unit comes with three bedrooms, three baths, a gourmet kitchen, a great room, self-owned solar and a two-car garage in a three story configuration. Montivo designs are set up in a series of mostly triplex units, with one duplex, one quadplex and a tot lot community area. Close to shopping, restaurants and the trolley, Sandstrom said he believes this is a great addition to Santee and has had nothing but good responses from its neighbors.

“I’ve always liked Santee,” said Sandstrom. “It is really a progressive city and they are working hard at being a good East County city. The work they did with their downtown in connection with the trolley is really exciting and we wanted to be a part of that. So when the lot became available, we started planning on the 18 units. I like the idea of building entry-level housing. It’s a big need in San Diego and this project is just our size for what we do. We enjoy our time in Santee, the staff are working really hard to make the city better. It’s a good atmosphere there. It’s a great site, close to shopping right in downtown and the area wanted to see a project like this.”

Sandstrom said it is a good market price for entry-level housing, starting in the mid $400,000 and a great addition to the area and good for the city. There is a sales trailer on the lot next door, so the units are now open for sales and delivery will be this summer in July.

“We are a private homebuilder that specializes in small infill projects, which I think is the future of San Diego,” he said. “The opportunity to build on lots where the city isn’t burdened with more infrastructure. I believe it is important to build every single home we can in San Diego. There is the need because there is such a shortage. We are excited to be able to do this small one family project and bring a good price point. It’s not cheap, but it is quality and it takes a lot more money to build condos as to a single-family home because of double insulation, double walls, separate plumbing and all the things that go into conjoined units. It runs about 20 percent more to build compared to single family homes. We know what we do well. There is nothing better for us than providing a family a way to buy their first home.”

After working 20 years for large build builders, Sandstrom was laid off from Richmond American Homes in July 2007 so he started by own company in October 2007. “I always wanted to own my own company, so I thought it’s the worst recession ever, so why not start a new company,” he said.

He began his business by buying lots from people who decided not to rebuild after the 2007 wildfires, mostly in Rancho Bernardo. He said it was pretty easy as the government had made it easier for people to get rid of their lots, and for those who purchased them to get permits to build. Pointe Communities has built 47 entry-level homes during the last seven years in seven communities in Rancho Bernardo. He said was a great model for his new business to start with.

In 2010 it branched out from Rancho Bernardo and Poway and are now building all over the county. In East County, Point Communities has completed projects near Shadow Mountain Church in El Cajon, Casa de Oro, Helix and an upcoming project in Spring Valley beginning in April.

After an eight year search, a daughter reunites with father