A handful of residents in the 10000 block of Riverview Walk watched from outside their suburban homes Sunday as a crowd of people gathered in the parking lot of the Cameron YMCA in Santee to show support for the Black Lives Matter movement. 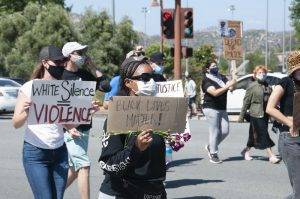 The event, publicized by San Diego Unity Organizers’ Jay Wyatt and Alexandria Brown, among others, called for a peaceful march to begin at the YMCA and end with attendees tucking flowers in the chainlink fence at the Santee sheriff’s station on Cuyamaca Street.

Wyatt said organizers chose to hold the march in Santee in part because of recent negative publicity with men openly wearing racist paraphernalia.

“Ending the march at the Sheriff’s Department was a fitting symbol for us with the marches against police brutality and wanting to speak to the community at-large but also let the police know our message. Additionally, it is located on a pipeline in Santee and we wanted to make sure we were heard by everyone there,” Wyatt said.

June Cole and her adult daughters Jennifer and Emily said they were there to protest recent events of police brutality such as the May 25 Minneapolis incident in which George Floyd, a 46-year-old black man died in handcuffs while white police officer Derek Chauvin knelt on his neck for almost nine minutes.

“The laws need to change about how police can arrest with brutality. I protested back in the sixties, this is nothing new. It has to stop, we have to come together and be aware of the racism that’s still alive. I’d like to see an end to the strangleholds and the racial profiling,” June Cole said.

Jennifer Cole said she believes it is important to change things at a local level and grow from there.

“Santee has a stigma. It’s important we get this out there and stand united against it,” she said.

Santee resident and civil rights attorney Melissa Johnson said she decided to attend the afternoon march when a colleague pointed out how much more she could be doing to advance civil rights beyond working in litigation.

“I live here in Santee, right up that hill and out of 216 houses with residents in my development, four are gay, there are no black families and there are a handful of people from other minority groups. This is East County and I can’t empathize with being a black person but as a gay woman I can empathize with being in a minority group,” Johnson said.

The event also drew San Diegans who were present at a May 30 La Mesa protest that turned violent.

“I’ve personally had very intense confrontations in the past, I’ve been pulled out of my car violently and accused of having a stolen car at gunpoint… I was at the protest in La Mesa and got hit with a rubber bullet. You know, nothing violent happened until the police started the violence. There was no warning,” Leah Morrison said.

Four young children, ages 7-11 sat on the curb near Johnson, licking popsicles and watching the crowd gather. Jessica Hill said it was actually her young son Rafferty, 11, who asked if their family could attend the march through Santee.

“For being so young, he knows so much about history and he is the one who asked if we could go to a peaceful march to show our support,” Hill said.

Shortly before the protesters began their walk, Wyatt and Brown spoke from atop a white pickup truck, reminding attendees to keep the event peaceful.

Brown, wearing a white armband marked with the red cross of a nurse, led the crowd in a call-and-repeat: “All love, no fear!” To one side, her fellow nurses gathered. Christina Kelly explained their motivation for being there.

“We’re all from different organizations but realized there is immense potential for injury at these protests.  We started with four and now have about 150 nurses involved. The California Nurses Association has given us full endorsement and we’re here for anyone who is injured, not just the protesters. We’re medically obligated to help anyone,” Kelly said.

After the protesters departed for their walk to the Sheriff’s station 1 1/2 miles away, the residents who watched the gathering lingered, several making comments that the event appeared to be more peaceful than they had anticipated.

“A lot of Santee residents are hesitant when things like this take place but it looks like this protest was pretty peaceful and organized. We got notice ahead of time, someone gave all the residents here flyers. We just want to keep our city safe, Santee isn’t all bad, there are a few bad apples in every group,” Kathryn Sears said.

“There was that one brief moment at Target with some unrest that made it hard to celebrate entirely but in terms of what was actually accomplished, I felt like we made a statement that Santee can be a peaceful place and very welcoming to minorities. The work is not done but we’re starting to peel it back and rebuild that area with cultural diversity and cultural acceptance… We’re taking steps toward cultural acceptance all over San Diego,” Wyatt said Monday.

Recent United States Census Bureau statistics show that 80.7% of Santee’s estimated 58,081 residents are white; approximately 2.1% are Black and 7.6% have a background that includes two or more races. 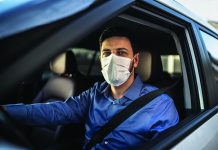