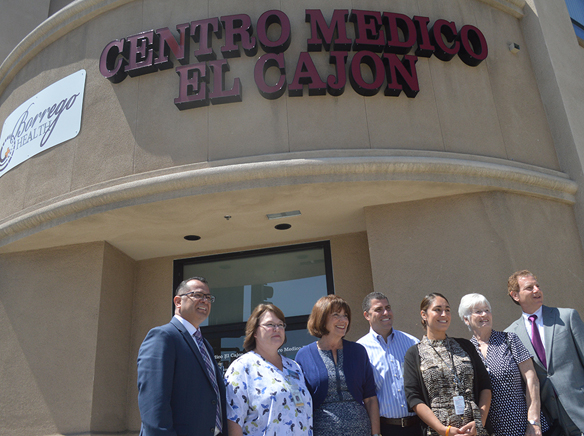 Centro Medico El Cajon, located in El Cajon, was the location at which Davis and medical center staffers and patients exchanged information about the current state of community medicine and governmental actions to support improved access and care at these treatment centers, which often serve vulnerable populations. Staffers at the clinic told Davis that most of their patients are Arabic speakers, followed by Hispanic clients and a mix of other demographic groups. The site serves more than 300 patients daily.

Centro Medical El Cajon officials described the center’s approach as “patient centered comprehensive care” that follows a “team-driven process,” linking the patient with a nurse, provider, and translator and literacy assistance as needed. The center features x-ray equipment and a laboratory on the premises to analyze test results and make diagnoses. Urgent care is available at this location.

Many of the center’s clients come from refugee populations. Diabetes is a frequent diagnosis for those visiting the facility for treatment. The clinic relocated to its current site from offices nearby in October, and the center’s directors are already planning expansion. The downstairs space houses equipment and rooms for dental care and children’s care. Upstairs is the area for women’s health facilities and behavioral medicine. The majority of the patients are covered through Medi-Cal, but staffers noted that no one is turned away. If anyone needs help, that person is provided medical care.

Mark R. Connelly, chief operating officer at Borrego Health, said patients are charged a “nominal $30 fee,” and that the recent loosening of qualifications for Medicaid expansion increased coverage from about 70-75 percent to 85 percent covered under that stream of access to medical insurance.

Davis began her visit by sitting down with representatives of Borrego Health and on-site employees of Centro Medico El Cajon. Davis inquired of the clinic workers, “What is getting in the way of serving families here? How can we in government be helpful to you?”

“A lot of my concern is how what we are doing impacts you. Family centers like this should be helped to grow. I know dollars have been held back,” she said.

She also related that among her legislative colleagues, “a good bit of Congress” prefers doling out funding in large releases through block grants. Davis stated her intention to write a letter to the Office of Management and Budget pushing for already approved spending dollars for the current fiscal year to be released.

Davis discussed the “transition” and state of implementation of the Affordable Care Act. She said that the results are not as great as had been projected at the outset, although “some bending of the cost curve” was apparent, in her assessment. She and the staff panelists mulled over effects of a predicted premium payment rise in the California medical insurance “exchange,” called Covered CA, by four percent this year.

Aside from those shared concerns about obtaining sufficient money from Washington to run health centers, the Centro Medico staffers emphasized the need for better public education on the benefits of receiving medical care as a service from health centers like theirs. Victor Manuel Perez, Borrego Health’s chief government and public affairs officer, said the community needs to be educated on how to use the insurance that is available to them.

Davis observed that those who have learned about the medical services are relieved.

“Families who’ve felt they’d never have access now do, and they can get good quality care,” she said.

Davis concluded her visit by touring the center’s treatment areas and speaking with patients and on-duty personnel.

What are the challenges lying ahead that Davis and the center’s medical experts foresee? The Centro Medico staffers imparted the dismaying fact that primary care is not a physician specialty that is popular now. They further described private practice doctors as being relatively unaware that health centers generally have better facilities and tools than their own and that health center practice allows more time with patients.

“Fifty years ago, there were no clinics like this,” he said. “Now, this is a solid model. And this is part of the legacy and history building on the civil rights movement.”