Up the hill from El Capitan High School, the huge white EC is indisputably visible for many in Lakeside.

sSince 1961 it has been a symbol of pride for the students, teachers, staff and the community. The sign, neglected for a few years, was refurbished on July 25 with some students, parents and community members clearing the brush and repainting the sign, an age-old tradition that fell to the wayside.

Billy Ortiz decided the hillside sign needed refurbishing, talked to El Capitan Principal Scott Goergens and said he got his “blessing” to move forward with the project.

Ortiz said the original sign was made of field chalk by Tom Isom, a student at the high school at that time. In 1998 Steve McNamara decided to make the EC more permanent and made the letters out of concrete as part of his Eagle Scout project.

Goergens said that El Cap has more pride than any other school that he has worked with, and with the tight-knit community of Lakeside he honestly believes it is unique among other school communities. Goergens said learning the history of the sign from Ortiz and the Lakeside Historical Society was wonderful and something he wants to continue.

Goergens said El Cap has four leadership classes while most only have one associated student body. He said they tried to get one of the groups to do the project, but just weren’t able to get it together before COVID-19 hit, schools were closed and gathering restrictions put in place.

“In the future, when we are not dealing with COVID, we will have an actual football team activity or school activity to keep the sign refurbished,” said Goergens. “Our students look at that big EC every day and it is a huge thing of pride for them to look up on the hill and see the white EC.”

Ortiz said they began the project at 7:30 a.m. on Saturday with about a dozen people on the hill, and a few down below whom he called the “geriatric cheerleading squad.”

“Up on the hill, all I wanted them to do was to clear about five feet away from the lettering, but they went and cleared the entire area which was absolutely amazing,” said Ortiz. “We could barely see their heads when they started clearing because the grass was so tall. Hoes and rakes were swinging, someone had a weed eater and about two hours later you could see bodies walking around there. With rollers and paint, it was done in about three hours.”

Ortiz said that Payton Hardware in Lakeside donated the paint and supplies, and Lakeside Auto Body donated funds to keep the workers hydrated and fed. 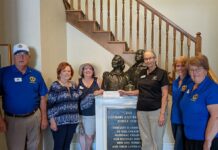 A feast of books and food feted at Sunbelt Publications’ 25th...