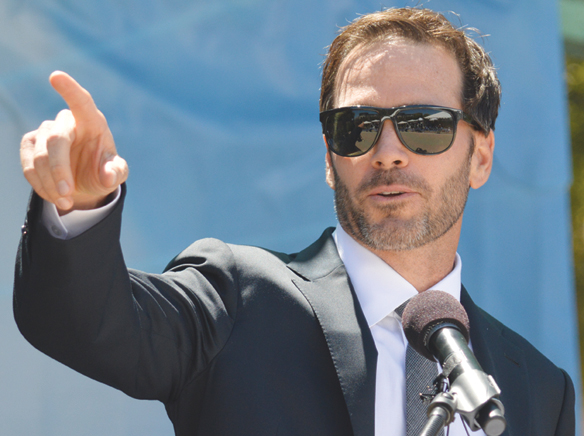 Heroes come in all forms. Sometimes it can be a stranger who helps someone in need with a random act of kindness, other times a hero is someone that you can look up to for inspiration. Lucky for the city of El Cajon, its hometown hero has the ability to transform himself from racecar driver, to philanthropist.

A day after mourning the loss of San Diego legend Tony Gwynn, an estimated 3,000 local fans and community leaders gathered together to recognize another hometown hero, Jimmie Johnson.

Heroes come in all forms. Sometimes it can be a stranger who helps someone in need with a random act of kindness, other times a hero is someone that you can look up to for inspiration. Lucky for the city of El Cajon, its hometown hero has the ability to transform himself from racecar driver, to philanthropist.

A day after mourning the loss of San Diego legend Tony Gwynn, an estimated 3,000 local fans and community leaders gathered together to recognize another hometown hero, Jimmie Johnson.

As his years of racing fly by his driver’s side window, Johnson said his impact as a community leader has grown.

“As time goes you on, you start to recognize there’s a responsibility there,” he said. “You don’t go on that athletic journey thinking you’re going to be the one to represent your community.”

Johnson’s generosity is widely acknowledged, the Jimmie Johnson Foundation has donated more than $6.7 million to schools across the country. Christina Willis, Principal of Johnson Elementary School here in El Cajon Valley, said they were the recipients of the Jimmie Johnson Grant Foundation this year.

“We received $50,000 for our computer lab that just opened up in February,” she said. “The new lab has mad a tremendous difference in the educational opportunities for our students and we are so excited to be here today.”

The kid’s from Johnson Elementary could barely contain themselves, frequent chants of “Jimmie”, or “48” rang out every few minutes and Johnson said he loved it.

“There’s so many kids,” he said. “I’m a big kid at heart and to have the schools, teachers and kids here makes it a pretty awesome day.”

Johnson said becoming a parent himself has allowed him to see things from a whole new perspective.

“Having two girls of my own, I look at them and hope they have every opportunity I did in life,” he said. “Knowing that it starts at a young age and that it starts in school is really why our focus is on education.”

During the celebration, El Cajon Mayor Bill Wells and State Senator Joel Anderson announced to an enthusiastic crowd that June 17 was officially recognized as Jimmie Johnson day in the city of El Cajon and in the state of California. A street name was also named after Johnson, as Second Street will now also bear the name of Jimmie Johnson Drive.

Wells said Johnson is a beacon of light for all those chasing their dreams.

“As you may know the city of El Cajon’s motto is The Valley of Opportunity,” he said. “Jimmie Johnson truly embodies this.”

Johnson, a six-time NASCAR champion, said even he was surprised by the turnout.

“To everyone who came out today, thank you, it means the world to me,” he said. “I didn’t know what to expect and when I turned the corner here my stomach dropped.”

Giving back to the community has become a huge part of Johnson’s life as his career progressed, but many in attendance will remember the racing.

Codianne said he goes to Las Vegas every year to see Johnson race and had his jacket autographed by Johnson in person.

“Phoenix 2011,” he said. “And it’s actually because I was in the automotive program at my high school and our teacher got tickets from Jimmie to go to Phoenix. Jimmie’s the best.”

The stories that make up a NASCAR champion began before anyone ever knew his name. Whether it was riding bikes, four wheelers or skateboards, Johnson said even as a kid in El Cajon he has been pushing his limits, sometimes to gruesome results.

“I remember riding down Shadow Mountain on my way to high school one day and I crashed on my mountain bike. My buddy tagged me as he went by and it pulled my right eyelid off,” he said. “My Aunt lived nearby so I’ll never forget running down her driveway while she’s leaving for work and I’m bleeding everywhere, eyelid shredded, that scared her pretty bad. Wild day, a lot of broken bones out here.”

Although the day was dedicated to honoring achievement and success, Johnson’s message to the fans and children was one of gratitude and encouragement, he said.

“Everyone always told me I was crazy for chasing this dream and that it would never happen,” he said. “I guess I ended up on top of that deal.”