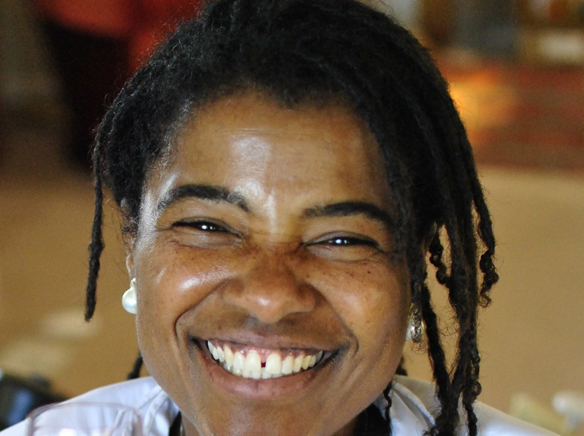 Joan Jackson weighed 320 pounds at 39- years-old. She was depressed, pre-diabetic, and plagued by problems in her colon and feet. In such a condition, she had feeling that a stroke or heart attack was imminent. Her son was young at that time, and she had a wakeup call when her immobility kept her from being there for her son. She questioned the example of self-care and discipline she was setting for him.

“I knew I had to change, or I would die,” said Jackson.

Joan Jackson weighed 320 pounds at 39- years-old. She was depressed, pre-diabetic, and plagued by problems in her colon and feet. In such a condition, she had feeling that a stroke or heart attack was imminent. Her son was young at that time, and she had a wakeup call when her immobility kept her from being there for her son. She questioned the example of self-care and discipline she was setting for him.

“I knew I had to change, or I would die,” said Jackson.

So change she did. Jackson was a practicing attorney and research was nothing new to her. Luckily, she had some knowledge of self-help techniques that incorporated a raw, vegan lifestyle. Suspecting food was a major source of her health problems, she switched her diet overnight.

“Within three days, all my symptoms were gone,” Jackson said.

She lost 200 pounds by changing the food she ate, but also changing how she felt about food. She spent three weeks at the Optimum Health Institute in Lemon Grove. She took a raw food class after leaving OHI.

“My kitchen evolved over time, I started with almost nothing. My son was not thrilled. But I switched to all organic, and committed to 60 percent minimum raw for life,” Jackson said, sitting in the sun room of her home at Lemon Grove’s historic Troxell Manor.

During her stay at OHI, Jackson befriended her roommate who ended up influencing Jackson’s career path. Jackson’s former roommate dropped by her house one night with twenty OHI patients seeking tasty, flavorful but healthy food. Some wanted food for detox, some wanted to eat gluten free, some wanted raw. And Jackson found that she could easily accommodate all of them. Without stress, without fuss, inherently seeing a simple process where others had become intimidated by what they perceived as a strict culinary program, Jackson’s knack for the living raw lifestyle kicked in, and teaching others felt natural.

“I’m not a chef,” she insisted. “I’m a systems thinker, big on organization. I work with the energy of the students, I teach for empowerment. If what I was teaching made the difference between life and death for some people, I had no right to stay small with it.”

Jackson followed her instincts to expand her teaching. What started as casual demonstrations of the living raw lifestyle to small groups of people in her home became more of an occupation. She left full-time practice of law in 2009 because the satisfaction of that job was nowhere near what she derived from teaching people how to re-program their habits, their mindsets, their lives, for the purpose of living better.

“My real paycheck was when someone told me, ‘I can’t wait to get home so I can try this’,” Jackson said.

In full entrepreneurial spirit and equipped with the right tools, Jackson developed a manifesto of sorts to accompany her philosophy, approach and recipes. In 2013 she finished “The Raw Kitchen Magician: Making Raw Food Real Easy for Real People,” which retails for $150 but also sells on disc for less. It took two and a half years to put together her descriptive, image-rich manual/guidebook/cookbook. “The Raw Kitchen Magician” breaks down how to live raw, cook raw, why to eat raw because Jackson said it is not as difficult as people think. Starting with a stocked pantry, with basic equipment (dehydrators, a blender, cutting board, good knives and glass food storage), and a few hours in the kitchen once a month, Jackson outlined the easiest way possible for even the busiest, fast-food ingrained people to improve their physical and mental well-being with food.

“My teaching is coming from a real person who had no time, who didn’t have any experience really cooking food, who has a kid who couldn’t stand this, and I can articulate this,” she said. “I’ve truncated everything. Boom! You’re in the system. Just do it!”

People not only channel Jackson’s excitement about living raw but also sustain it, as her approach is surprisingly simple.

It is not necessary to eat 100 percent raw all of the time (Jackson herself only does that two to three months out of the year), nor do you need to be an aficionado in the kitchen. She said it gets easier as you go along, especially when clients begin to feel better.

“People have to walk through it and get their hands on it before they feel safe,” she said. “Some people quit before they have a chance to find out how easy it is, so my whole goal was to show people how the raw food lifestyle can compete with convenience.”

When Jackson’s clients have that breakthrough and the light bulbs go off for everyone, her calling is clear. She knows why raw food living grabbed her and “would not let her go,” and the process itself is more than just self-realization. She believes that society has relegated control to food and pharmaceutical companies. She said we worship convenience at the expense of our health. She is not alone in that idea, but said the raw food industry is unfortunately, polarized. Between doctors who promote raw living and chefs who offer recipes, Jackson saw a need for middle ground.

“There’s nobody in the middle helping real people with careers and disease to make this really work,” she said.

Jackson’s goal to help people aligned perfectly with the visions of current Troxell Manor owner Steve Hermecke. He bought Troxell Manor from the estate of the previous owner after he spotted the Manor with the enormous Moreton Bay fig trees in front and saw it as a place of healing. Hermecke brought in a gardener to clean up and take over the grounds and in 2012, after attending one of Jackson’s raw food classes, asked her to live at Troxell Manor and teach classes there in what was to be a community wellness center. Jackson now offers a residential one-week raw food lifestyle seminar and Saturday evening raw food classes at Troxell Manor.

She has clients who are doctors at UCSD’s cancer program, want to lose weight, are sick, or whom have gotten better and credit Jackson with saving their life from disease.

How exactly does this happen, from diet alone? Similar to the eating raw lifestyle, it is not as complicated as it sounds, and does not require lengthy explanations from doctors or nutritionist to understand that our bodies immediately use uncooked food.

“When you cook things, there are categories of loss,” she said. “Enzymes are the catalyst to almost every reaction your body has. They get destroyed at above 108 degrees. Our bodies need the enzymes in the food to digest the food. It’s like, a key to assimilate. Without those enzymes, then our body pulls from our own stores of enzymes.”

Your body essentially processes raw food “at a lower cost to you,” Jackson said. In addition, eating “clean” happens when eating raw. With fruits and vegetables consumed, healthy sources of protein are incorporated, and processed foods are phased out.

“I’m blessed to be at the forefront with pragmatic materials to help people know how to make this work, so this has been worth every sacrifice—absolutely,” she said.

Feeding the Flock Ministry to have its first annual fundraiser