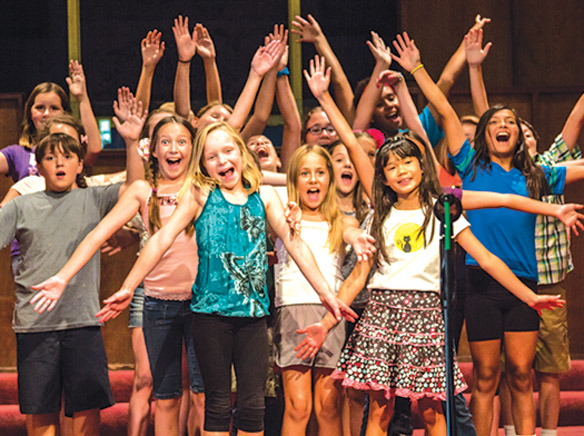 Hailed as one of the most affordable quality musical theatre camps in the United States, CYT offered East County boys and girls an opportunity to perform parts from one of Broadway’s most successful franchises, “Wicked.”

Hailed as one of the most affordable quality musical theatre camps in the United States, CYT offered East County boys and girls an opportunity to perform parts from one of Broadway’s most successful franchises, “Wicked.”

Campers began the week with a soft audition to access their performing prowess. Then they were broken up into four color-coordinated teams, each assigned with a camp mentor and assistants.

Each team spent mornings rotating into classes where they received a crash course on the art of theatre taught by qualified instructors. CYT camp counselor Megan Flint said students learned as much in a week as some performers do in several months.

“We try to teach them some of the fundamentals of theatre,” she said. “Things like terminology of a theatrical production, voice-coaching, choreography and singing. Something as simple as staying on beat in a song or dance number to some of the more complex aspects like vocal projection. All of these are very important aspects of performing in theatre.”

Tina Filley, East County CYT coordinator said she loves to see the different talents of the campers and how their attitude changes after just one day.

“We have a highly varying skill level of kids,” said Filley. “Some kids love to sing and dance and some are less inclined to be center stage. The great thing is a lot kids who were too shy to take a more involved part during their first camp day see their peers perform and think ‘hey, I can do that’ and come back ready to perform.”

But the week wasn’t all hardcore drama. After lunch, teams competed against one another in a slew of fun, outdoor games, amassing hundreds of thousands of points in effort to be named the kings and queens of the camp at the end of the week.

“We wanted to create an atmosphere of fun competition,” said Filley. “We want to see that these come here and take the extra steps, work hard and go out and get it, here and in life.”

At the end of each day, all the teams came together to rehearse the camp’s theme show “Wicked,” with all 75 tween campers having a role to perform. On the last day of camp all the young thespians work came to fruition with a performance showcase for their friends and family. Filley said she thinks the most important point is what comes when campers go home after their week with CYT.

“This camp definitely empowers these kids,” she said. “You can see their confidence levels skyrocket which in turn, makes them stronger students in school because now they’re more determined individuals. They’re able to speak with more confidence in front their classes and to adults. To see these kids transform in the short time span of a week, it’s amazing.”

Visit www.cytsandiego.org/ to find out more about the program, how to get involved and dates of upcoming theatre camps running year-round.

The Taste of Lakeside gets Miss Rodeo Lakeside one step closer...