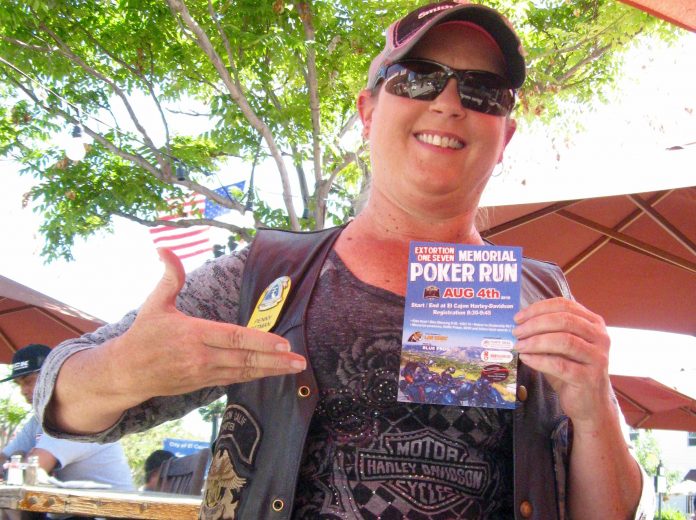 It is a typical Saturday, you are running errands, and it seems there are motorcycles everywhere. Do you ever wonder where the heck they are all heading?  Our area is renowned for much, including weather conducive to motorcycle riding virtually year-round.

This, of course, comes as no surprise to anyone living in the region, particularly on the weekends when bikes are out and about in significant numbers.

It is a typical Saturday, you are running errands, and it seems there are motorcycles everywhere. Do you ever wonder where the heck they are all heading?  Our area is renowned for much, including weather conducive to motorcycle riding virtually year-round.

This, of course, comes as no surprise to anyone living in the region, particularly on the weekends when bikes are out and about in significant numbers.

What may be surprising are reasons for many groups of motorcycles riding to the same destinations. In many cases, what is being observed are fundraising events in action.

It has been stated more than once that motorcyclists, bikers if you will, are some of the most generous folks in our great nation.  So, it is no surprise that perusing various websites listing local organized rides reveals multiple events almost every Saturday supporting a wide variety of charities and causes.

In part a reflection of the high concentration of active duty military personnel and veterans in the region, some of the listed events support veteran and military related causes. One such event is the Extortion One Seven Poker Run scheduled on Aug. 4 in El Cajon.

For the unaware, the purpose of a poker run is to raise funds for the designated charity or cause. For a fee normally in the range of $20-to-$25 per person or bike, the participant is provided a poker scorecard. At each of five stops during the run, arranged by the event organizer, a playing card is blindly drawn.  The cards may be in bag, shuffled face down on a table, or displayed in some other manner so the rider can make his/her card draw.

The face value of the drawn card (Ace, king, deuce, five, etc.) and suit are then noted on the score card by one of the folks running that stop, with the card returned to the deck.

By the end of the run, each participant has a five-card poker hand based on the blind draws.  These poker hands then compete for the prizes, which normally involve a portion of the funds collected during registration.

Usually high hand, low hand, and other variations receive prizes, with the proceeds after these payouts going to the designated charity or cause.

For the Extortion One Seven Poker Run, the card draws will occur at El Cajon Harley-Davidson (first and last stops) and Veterans of Foreign Wars Posts in Alpine, Poway, and Lakeside. Once back at El Cajon Harley-Davidson, there will be a barbecue, live music by Pat Ellis and the Blue Frog Band, and a short ceremony announcing the prizes, including those from the opportunity drawing. Additionally, a blood mobile will be on site.

This poker run is being held in the memory of the lives lost on Extortion One Seven.

Extortion One Seven was the call sign of an Army helicopter shot down in Afghanistan by a rocket-propelled grenade fired by the Taliban on Aug. 6, 2011.

Killed were 31 Americans, including some of the nation’s premier special operators. It is to remember this loss and support the Navy SEAL Foundation and EOD Warrior Foundation that the bikers, many of them active duty military or veterans, will participate in the 6th Annual Extortion One Seven Poker Run.

This annual event was started by Glen Ottman and John Alford, both retired U. S. Navy. As previously described by Ottman’s widow Penny Ottman, the ride came about rather spontaneously.

Her husband and Alford were meeting for breakfast in El Cajon on Aug. 6, 2011, coincidentally Glen’s birthday.

When Alford arrived, he informed Ottman of the aircraft shoot down and loss of life.

On the spot, they decided to do something.

Ottman has since passed away, but the event he and Alford conceived lives on.

In our nation with less than one-percent serving in the military, many have little to no understanding of the warrior culture, including the mandates of never leaving the fallen on the battlefield and never forgetting the fallen. This warrior culture provides the motivation for many riders, particularly the veterans, to be part of something important. On Aug. 4, riders will come together to demonstrate their generosity and patriotism by supporting a poker run supporting the Navy SEAL Foundation and EOD Warrior Foundation.  If out and about that Saturday, those motorcyclists you see on the road might just might be riding to raise funds for this worthy cause.

Helping homeless in Lakeside is a community issue