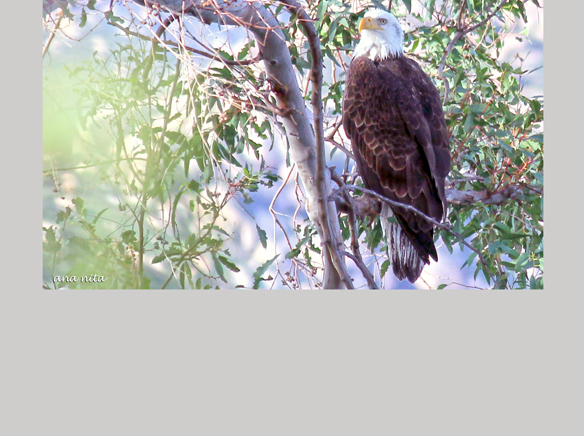 The bald eagles have landed!

A family of bald eagles is back in town again at Lake Jennings, placing Lakeside on the map for many wildlife photographers who are traveling long distances to get a shot and also for tourists who’ve never seen our national bird before. The locals are the most privileged, some being able to admire the eagles from their own patios.

The bald eagles have landed!

A family of bald eagles is back in town again at Lake Jennings, placing Lakeside on the map for many wildlife photographers who are traveling long distances to get a shot and also for tourists who’ve never seen our national bird before. The locals are the most privileged, some being able to admire the eagles from their own patios.

“Lake Jennings is literally my back yard,” says Scott Barnhills, a business owner by day and a sports and outdoor portrait photographer in his spare time, who is now trying his hand at capturing the bald eagles on camera. “Jenning’s eastern fence borders my back property. Since I heard of the eagles I would occasionally ride my mountain bike or hike to the lake looking but hadn’t seen them until these last few weeks.”

This is a very big deal for wildlife photographers. “I feel like I found Bigfoot,” confessed Barnhills, who is at the lake on most days, bumping lenses with quite an impressive crowd of photographers from all over the county. Bob Ryan, a Lakeside based photographer, created a group on social media “Bald Eagles in Lakeside” where everybody can post their best pictures of the eagles.

Two adults and a juvenile were first spotted in the area few years ago and Kira Haley, the recreation manager at Lake Jennings, says that after being back this year again, the majestic birds “are so active and they’re constantly in a new place around the lake throughout the day. The eagles are constantly chasing the osprey and vice versa which is really enjoyable to watch. They are avid fisherman as well, it’s so enjoyable to watch them show up when the trout delivery truck stocks the lake and to watch them catch their lunch.”

The bald eagles, unique to North America and usually living up north in Alaska because of the yummy salmon, are not really bald, as the word initially meant white to describe the head, neck and tail. The adult birds have a dark brown plumage, while the juvenile could be easily mistaken for a hawk from the distance before it reaches maturity and is being awarded the immaculate crown. The ones at the lake right now seem to have been taking over the Blue Herons’ nest in the trees toward the dam. I’ve seen the adults carrying sticks in their beaks, a sure sign they are either remodeling, which is most probably, or maybe are building their own nest – which is a possibility that gets everybody excited. Imagine eaglets in Lakeside!

Based on my own observations while chasing them around with the camera, the adults are often crossing the mountains toward El Monte Valley to Hanson Pond where I’ve seen them three times this winter and also all the way to El Capitan Reservoir Lake. Who knows, they might be going to Padre Dam for some delicious fish as well, but you may want to check that for yourself. However, we can safely conclude the eagles like our little country town because of the multitude of lakes that provide them with fresh fish. Just so you know, I named the male eagle Jean-Jacques because he is shrieking with an obvious Canadian accent. If you want a sure picture, call him by this name and I promise he will answer.

Asked how is she dealing with what we could now call “the migratory photographers” as well, Haley thinks they “are a great addition to the regular group of wildlife photographers who come out every weekend” and that she tries to take mental notes “when I see the eagles around because the photographers are always asking where we have seen them last. We have so many photographers that share their photos of the eagles with us as well which is wonderful.”

Looking through the countless pictures of the bald eagles at Lake Jennings, I noticed some really impressive shots taken by Pamela Weston an incredibly talented wildlife photographer who is a nomad, traveling all over North America in a trailer with her amateur astronomer husband Mike Wirths. They call themselves “astrogypsies” or “geek pantheists” and come back often to camp at Lake Jennings for a couple of months here and there just for the impressive wildlife diversity and the open, beautiful sky.

“My most memorable day was the juvenile bald eagle chasing an osprey over the lake and dam. Spectacular display of flying on the part of the Osprey and a tired worn out panting young eagle,” says Weston, calling Lake Jennings “a gem. First time we drove in it was oooooohhhhhahhhhh!” Breathtaking indeed.