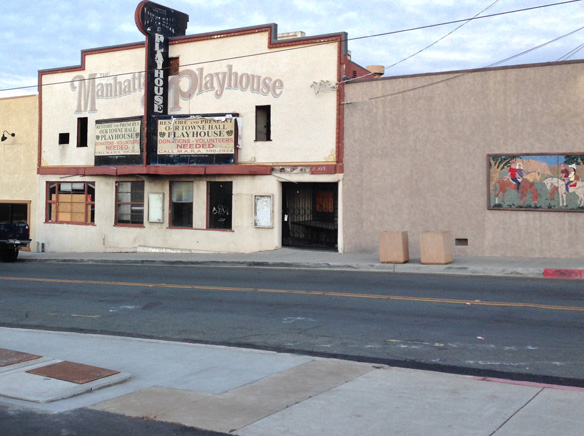 For many years, the old Lakeside Theater worried many Lakesiders, ever since the Octad One Production Company closed the doors to its playhouse. It was for sale and left for the homeless to enter and demolish. Now a new breath of life is reviving the historic structure, built in 1911.

For many years, the old Lakeside Theater worried many Lakesiders, ever since the Octad One Production Company closed the doors to its playhouse. It was for sale and left for the homeless to enter and demolish. Now a new breath of life is reviving the historic structure, built in 1911.

Rachael and Kellon Wolfe are a young couple with vision and knowledge of where they want to go with their new “white elephant” property. They own KR Wolfe Inc., specializing in construction and systems integration and installation. They purchased the theater and the former Montessori Pre-school building next door, from the bank. It was a hard sell trying to get a loan for the neglected and distressed properties. They were finally able to pull off a loan with the Small Business Association.

They knew they wanted to make the Montessori Pre-school into offices for the business, but they did not know what they had gotten into with the theater until after purchase, sight unseen. They said when they first walked into the building they thought, “What have we gotten ourselves into?”

They said family and friends looked at it and thought they were crazy.

Homeless had gotten inside and taken all the wiring, cut holes in the floors and walls and left a mess. Teenagers got on the roof and destroyed the light bulbs surrounding the perimeter of the building and done other damage. The Wolfes hauled away a huge dumpster of debris accumulated over the years of neglect. They saved the theater seats, projector, stage lighting and other memorabilia they hope to reuse some day. A tall fence with razor wire is now installed along the property to keep vandals from stealing building supplies.

They created a rustic and charming office space in the pre-school, using old movie posters and building items they saved such as old wood sash windows. Their project manager, Dan Willey, built a conference table with reclaimed wood from the theater. To show off the construction side of things they left the huge ceiling beams exposed.

Future plans for the theater are not quite final but one idea is to turn it into a micro brewery/restaurant. It is totally gutted, all the way down to the studs. This will help future partners see the possibilities of the space. The Wolfes plan to keep the exterior of the theater as original as possible and even restore the marquee. The old windows will need to be replaced with more efficient weather proof ones, but with an old fashion style. The Maine Avenue Revitalization Association will help with a grant for the facade restoration.

Rachael Wolfe plans to use old photos of Lakeside as part of her décor and her favorite is one of the Women’s Improvement Club, dressed in long dresses turning the first shovel of dirt for the soon to be built town hall that they helped raise money to purchase the land.  The citizens of Lakeside paid for the town hall. Mr. Fetters built it with a new way of building at the time—poured concrete; the walls nearly 2 feet thick. Lakesider’s used its town hall for dinners, dances, meetings and even silent films. Cowboys and ranchers would come from miles around to have fun on a Saturday night.

During the 1940,the Kursave family turned the town hall into a theater and movies were shown there until the mid 1980s. It later became a black ministry church, a thrift store and then abandoned. In 1997, the Maine Avenue Revitalization Association restored the marquee and facade, hoping that something good would happen if the theater looked better. Along came Octad One Production Company, a theater group from College Grove, looking to find a place to have live theater productions. They remodeled it into a playhouse, with new stadium style seating and hosted many productions to the delight of the community. Unfortunately their creative director, Wayne Erreca, had an accidental fall and could no longer run the production company, closing the doors after eight years of live theater.

KR Wolfe, Inc., plans to bring it back to life for the community to enjoy, but with a new twist. Like other businesses along Maine Avenue, a younger group of businessmen and women are taking over with a new way of thinking.

We can do more to get young people to the polls