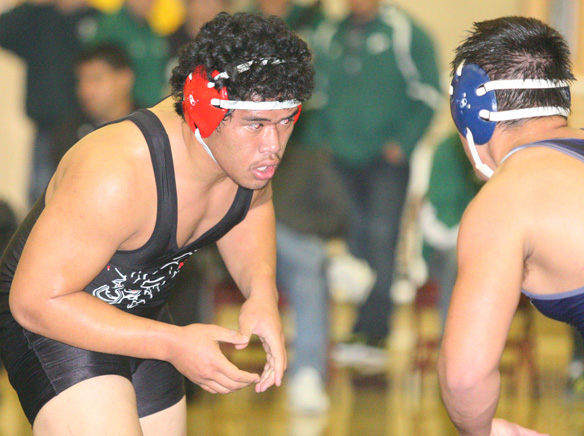 It’s been called the place where dreams are made and hearts are broken, and for two East County mat men, a trip to the 42nd California boys state wrestling championship tournament is at hand.

It’s been called the place where dreams are made and hearts are broken, and for two East County mat men, a trip to the 42nd California boys state wrestling championship tournament is at hand.

The top three place-finishers in each of 14 weight classes at the San Diego Masters earned the right to advance to the state meet.

Tausaga, who is ranked fifth in the state, takes an imposing 42-3 record into this year’s state tournament.

The state finals are Saturday at the same site.

The Matador strong man has set his sights on earning a medal this year after compiling a 4-2 record at last year’s state tournament.

His only two losses so far this season are to the No.1- and No. 2-ranked wrestlers in the state.

“He’s looking to get to the finals, (and) he’s going to have to work to get what he wants,” Mt. Miguel coach Vic Richmond said succinctly.

Tausaga, an all-league linebacker during the football season, pinned his way to the section’s Division IV individual championship the week prior to Masters, the section’s crown jewel tournament.

At the two-day Masters tournament, Tausaga, who received a first-round bye, completed a perfect 4-0 run by recording a 9-1 major decision against La Costa Canyon’s Kellen Carey in the second round, then defeated Granite Hills’ Francisco Saavedra by an 8-3 decision in the quarterfinals and Ramona’s Trae Rodriguez, the Division III champion, by a 12-7 decision in the semifinals.

Semifinals winners secured an automatic trip to the state meet.

“It feels good, like I accomplished something,” said Tausaga, who became a two-time Masters champion after also winning last year’s 220-pound division title. “We’ve worked hard all year. This is what we’ve been working for.”

Shlemoon emerged with last week’s Division III individual title but earned the No. 3 seed at Masters. He won his opening two matches by scores of 15-1 and 15-0 but suffered a narrow 5-4 setback in the semifinals to second-seeded Alex McIntyre of La Costa Canyon.

The ECV wrestler was then faced with winning two more matches to qualify for the state meet.

Shlemoon pinned Holtville’s Jessy Diaz in 4:28 in the consolation semifinals to advance to the critical winner-take-all third-place match against Olmos. The mat battle was a rematch of the Division III finals in which Shlemoon recorded a thrilling 9-8 double-overtime win.

The Masters rematch proved to be just as exciting.

Shlemoon moved out to early leads of 3-1 and 5-1 but takedowns by the Mar Vista frosh sensation narrowed the score to 6-5 with four seconds left.

But Olmos did not have time to complete a comeback and Shlemoon (43-6) stood triumphant in the most important match of the season.

“It’s amazing,” Shlemoon said. “It was really intense. I knew I just had to pull it out.”

Burningham, who previously placed fifth at the Division II finals, opened the Masters tournament with two wins — a 1:09 pin of Holtville’s Leroy Cerros, the Division IV runner-up and a 9-6 decision against Otay Ranch’s Adrian Hernandez, the Division I champion — before running into top-seeded Colt Doyle in the semifinals.

Doyle, who would go on to record a second-place finish via a 2-1 double-overtime loss to San Marcos’ Alex Graves, the top-ranked wrestler in the state, pinned Burningham in 1:07 in the semis to drop the Valhalla wrestler to the consolation semifinals.

Burningham overcome some early difficulties against El Camino’s Kory Reid, the Division II runner-up, to post a 14-7 win and, in the process, secure a berth in the third-place match.

The top six place-winners at Masters earned medals, even though only the top three advanced to the state meet.

Forman, who placed second in his weight class at the Division II finals, finished 3-3 at Masters with three pins, including two in the precarious wrestle-backs. He said he was happy with his performance.

“It’s some tough tournament,” Forman underscored. “It’s difficult to get as far as you can. I just feel kind of proud to be able to place here. It was exciting. It was a good feeling to get to the (Division II) finals. I plan on coming back (to Masters) next year and winning it.”

Rosete, who placed fourth at the Division III finals, lost his opening-round match at Masters but stormed back with four consecutive wins in the single-elimination wrestle-backs to reach the consolation semifinals.

The Monte Vista wrestler lost his final two matches of the tournament, however, including a fall to Division III champion Trae Rodriguez of Ramona in the fifth-place match.