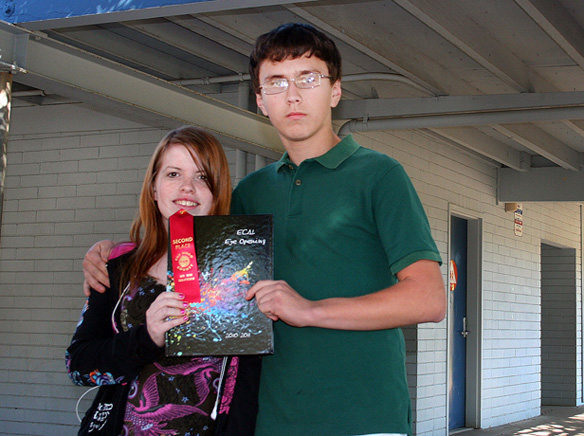 LAKESIDE — It isn’t easy for pupils at E-Cal (short for the East County Academy of Learning) to get much respect. The mere fact that they attend this alternative school have some wearing the labels (fairly or unfairly) of “incorrigible,” “troublemaker” or “handicapped..”

With already two or more strikes against them, the students nevertheless are moving forward on a campus that seems to suit most of them very well.

LAKESIDE — It isn’t easy for pupils at E-Cal (short for the East County Academy of Learning) to get much respect. The mere fact that they attend this alternative school have some wearing the labels (fairly or unfairly) of “incorrigible,” “troublemaker” or “handicapped..”

With already two or more strikes against them, the students nevertheless are moving forward on a campus that seems to suit most of them very well.

On a campus that used to house Eucalyptus Hills Elementary School, the location is an oasis of solitude in which many pupils can take the time to absorb the learning material necessary to return to a mainstream educational facility.

Their time there, though, is not a vacation holiday.

“We are often the last chance some of these students will have for public education opportunities,” said Principal Kevin Bowers, who formerly led Lakeside Middle School.

“We have children with emotional, learning and/or behavioral disabilities. It’s a small population, but our goal is to get them back, if possible to a mainstream school.”

Some, however, graduate from E-Cal and then go on to employment, the military, higher education or something else.

It’s been more than a decade since controversy whirled about this venue. River Valley Charter High School once located on this campus while Eucalyptus Hills Elementary still existed.

The furor over that academy’s presence caused some in the surrounding neighborhood to actively seek the removal of River Valley, which subsequently relocated next to LMS.

Ironically, Eucalyptus Hills closed a year later, leaving the venue empty. In 2001, E-Cal opened its doors to students who could not attend one of the other Grossmont high schools, even though the program is run by the Lakeside Unified School District.

In those 10 years, the school has helped hundreds of students who otherwise might have turned off and dropped out of the educational system.
One of the most important things the E-Cal program has done has been to provide high school core cirriculum and supplemental support through small groups.

One of these groups, taught by Dr. Katherine McNeal has been the yearbook class. Over the past several years, the annual has evolved into a publication that has garnered several second place ribbons at the yearbook competition at the San Diego County (Del Mar) Fair.

“We took the critique from last year’s second place finish and put them into practice for this year’s edition which we hope takes the blue ribbon in the 500 and under (enrollment) classification,” said McNeal, who also teaches the social sciences and digital media design.

“We have just 48 pages (compared with many high school yearbooks which feature hundreds) to tell our story. Our small staff has really done a good job in making those 48 pages really come alive.

Created by co-editors Betty Walters, a senior, and sophomore Andrew Stubblefield, the book has just been completed. It features such pages as a welcome back, holiday memories, field trip experiences, electives, students standouts, dual enrollment (those pupils who attend E-Cal and other Grossmont high schools on a part-time basis), community service, student council, staff and class pages.

“I started out as a photographer and page designer but then I was made editor,” Stubblefield said. “It’s not easy, but I think the book looks great.”
“I’ve been involved in yearbook since I was a sophomore,” Walters said. “With such a tiny staff, we have to do almost everything ourselves and it’s pretty hard sometimes.

“When everything is finished, though, it’s a great feeling to have. To know we pretty much did it all by ourselves.”

Also one of the things the students must do is raise the over $1,700 cost necessary to fund the annual. This has been accomplished by a series of ongoing fundraisers, such as ice cream socials, nacho lunches and the selling of student-made handicrafts.

The cost is so high because the school must meet the minimum printing order of 50, even though there are only 38 kids at the school. And many of those are from low-income families who cannot even afford such a luxury.


“I love to help with the yearbook, but I am not very good at raising funds,” admitted McNeal. “There are some really great students and members of the staff, however, who help in that department.”

One of those who has rendered valuable assistance is not a teacher or a student, but the facility’s custodian, Dex Martinez.

She has worked in the district for over a decade and has also adopted 14 children, many of whom have had to overcome some of the same problems.

“These (E-Cal) kids have to be motivated, but once they are, they take off on these projects like you wouldn’t believe,” she said. “They work hard at putting these crafts together and they get a real sense of accomplishment when they are able to give the money to a good cause, like this annual.”

Martinez also praised local merchants such as the Garden Fresh Market (near Lindo Lake in Lakeside) and Vons (off of Los Coches Road), who have donated money and material for these fundraisers.

Other items were donated for the cause, including an air compressor, among other valuable items which will be auctioned off.
“We’re at about $1,100, just $600 short of our goal,Z” Martinez added.

Helpful ideas for turning your new house into a home