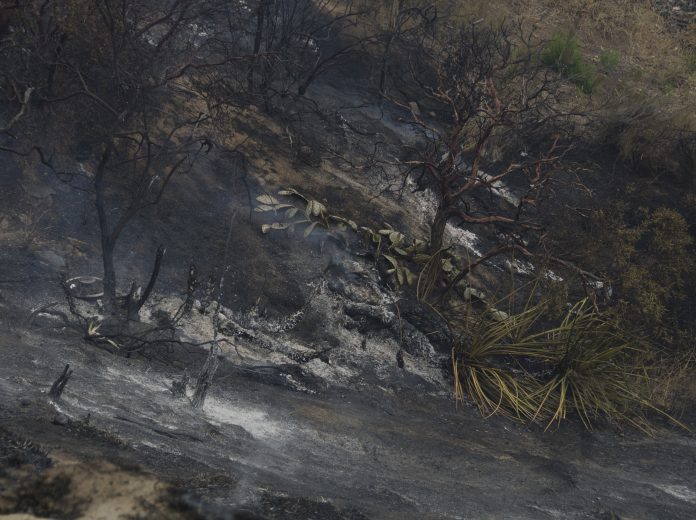 At a lonely McDonald’s off Alpine Boulevard, State Farm agent Eric Andersen met with his clients to discuss their options on Monday, July 9, 2018, just a day after the West Fire swept through the community and burned down their home.

Andersen’s office is in La Mesa, so driving up towards the charred canyons of Alpine, he said, left him with some trepidation.

“This doesn’t happen often for an agent,” said Andersen. “I’m a normal agent, not a big agent, not a small one. I’ve probably had four or five fires in my thirty-year career. We get lots of claims, but seldom do you have a total loss…Everything’s normal until you turn that corner and you find yourself in that neighborhood and it’s not like anything that pictures tell. It’s like being on the moon.”

“You get this feeling when you’re going up that you’re going to visit someone who’s just lost a family member,” he said. “When I actually got there, all that goes away. It’s like playing a sport. You’re scared on the bench until you’re actually playing the game. Once you get past the initial ‘I’m sorry’ and you look each other in the eye and you try not to say anything stupid or demeaning and just listen, then you focus on the solution. You just give them the chance to tell their story. Then you explain to them what we’re set up to do and what to expect, and that conversation goes from an initial I’m sorry to a more positive note.”

To be sure, Monday, July 9, was a difficult day for insurance agents all over Alpine and East County whose clients’ homes and personal belongings were lost or damaged in the fire that burned more than 500 acres in just three days.

Insurance agent Robert Petersen, an Alpine native, said he watched the fire swallow his client’s house from his own home.

“This was my only total loss,” he said. “I walked my client through the entire process when his house was going up in flames. I was on the phone with him, with a pair of binoculars against my face, describing what was going on with his house, which isn’t an easy thing to do.”

But trying times like this can bring the community together in important ways, said Petersen.

“Like anything tragedy related, the community just draws together,” he said. “All my neighbors left, so I was going through making sure that generators stayed on so refrigerators could say cold. A lady that works for me that lives over by the Highlands and she and others from her neighborhood were basically patrolling on foot. They even caught a looter who got arrested.”

Alpine has this opportunity to pull together fairly often, given its geography.

“It’s heartbreaking,” said Petersen. “This isn’t the first time we’ve gone through this, going back to the ’03 Cedar Fires. It doesn’t get any easier.”

Even Andersen has been through this rodeo before. Andersen said these times are what insurance agents live for because it is their chance to come through for their customers.

“When they had the big fires in 2007 and you have all the families in the community living in a big parking lot in a Target, which I’ve been through,and they don’t know if their home’s burned down or not, and you’re out there meeting with them or delivering water or just being with them, it becomes real all of a sudden,” said Andersen. “It’s your best day. The truth is that it’s a very good experience. You’re going to have a good day today. You’re going to deliver.”

Boston, Massachusetts implant Lisa Ford, however, is new to the wildfire scene. Forn has been in Alpine for six years and said she did not know what to do when she saw flames licking the edges of the trailer park where she lives, Alpine Oak Estates.

“I lifted up the blinds and that’s when I saw the fire that was way down the other side of the park,” said Ford. “I was feverishly trying to call my daughter, like, ‘what do I do?’ I’ve never been in a fire before. I hear the neighbor guy yelling as his wife, ‘get out, c’mon!’ I could feel the urgency and right after that the fireman was going around banging on everyone’s doors.”

Forn relocated to her daughter’s home, and then the whole family evacuated to a friend’s residence in Blossom Valley because of the air quality. Ford’s other daughter, currently living in Connecticut, phoned her mom and sister after seeing the fire on the news. Ford said her daughter sent a picture she had found on the internet of the mobile home park Ford had just evacuated.

For Ford, the West Fire came on the heels of losing her job, the death of her boss and the loss of her cat, but she said she is working hard to remain in good spirits.

“I’m either going to laugh or cry, so I might as well laugh,” said Ford. “When you’re down and out, you really have to believe that you have God, family, friends, people around you to help you. Alpine has really gone above and beyond to show me, and I’m sure a lot of other victims, that help is out there for them, and it makes a world of difference when you’re in my position.”

Ford is also facing insurance questions, but she said she hopes hers will be answered at a forum the Alpine Library held this week.

“You have to understand the lingo of an insurance policy,” she said, “So I’m really glad they’re putting together that meeting for the victims of the fire to help understand what my options are.”

And there are options for Ford and for others. Petersen said the whole community has been supportive of the people affected.

“People put differences aside when their issues like this,” he said. “And in a small community like Alpine, it’s a very nice to see.”