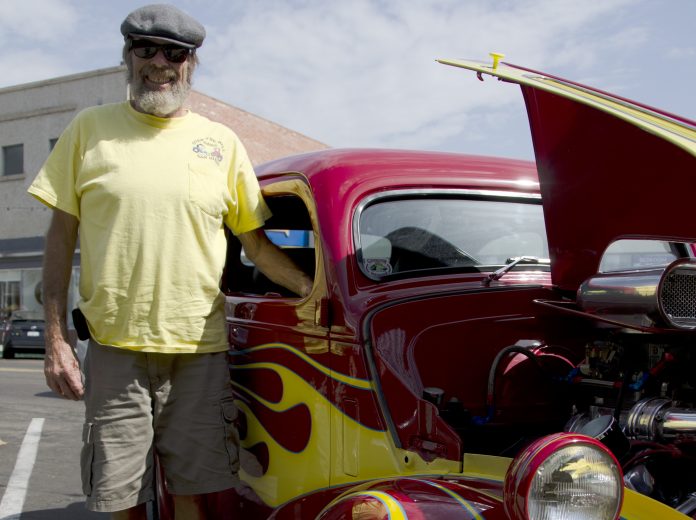 If anything has not changed in East County in the last 50 years, it is the weather.

But every Wednesday on Main Street for the entire summer, something else harkens back to the good ol’ days a half century ago: the Cajon Classic Cruise car show.

Hank Sandora, the proud owner of a 1934 Ford Roadster, said the car show is a way to bring the gang back together.

If anything has not changed in East County in the last 50 years, it is the weather.

But every Wednesday on Main Street for the entire summer, something else harkens back to the good ol’ days a half century ago: the Cajon Classic Cruise car show.

Hank Sandora, the proud owner of a 1934 Ford Roadster, said the car show is a way to bring the gang back together.

“This was the old stomping grounds back in the early ’70s and everybody’s still doing it,” said Sandora. “Now they have a car show. We didn’t have a car show back in the ’70s , we were all just here hanging out because we liked muscle cars and hot rods. And they brought it back and here we are every Wednesday.”

Sandora was 17 years old when he got his steely beauty, but back in those days the action happened on Second Street near the Jack in the Box, he said.

“I learned from my dad,” Sandora said of his car-fixing finesse. “He’s still with us at 96 years old and sharp as a tack. Every now and then my sister will pick him up and bring him to one of the shows I’m at.”

“We’ve been going to car shows since we got this one going, so for about the last fifteen years.”

Also sporting a 1934 Ford at the car show, Barry Darden, an East County resident, said he has been going to car shows for the last fifteen years.

“[The Cajon Classic Cruise is] better than some, and not as nice as others,” he said. “A lot of it has to do with size. Escondido Cruisin’ Grand is a lot bigger show. Here, you’ve got mostly people from South Bay and East County.”

Darden said he built his three-window coupe in his friend’s garage. Both of them were enjoying the shade of a store front for the car show.

What got Darden into classic cars?

“Honestly, American Graffiti the movie,” he said. “I loved the hot rod.”

But Darden said he comes to the car shows as much for the camaraderie as for the vestiges of vehicular Venuses.

And he is not the only one. Gary Browne, a participant in the car show and member of an unofficial club of guys who come out every Wednesday to parade their wheels and heckle their friends, said car shows have been a part of his life for a long time.

“I got my first car when I was probably 15, and I had to build it in high school, and ever since then I’ve been doing to car shows,” said Browne, amid a chorus of banter from his friends stretched out beside him on the sidewalk of Main Street.

With their hats and folding chairs, the crew looked ready to take on the afternoon heat – all they are missing is a cooler.

Browne has had his car, an English Ford, for 43 years. He bought the shell in 1975 without a firewall or an engine.

“A lot of people put Chevy engines inside and they shouldn’t,” said Browne, doling out car advice as frequently as his buddies dropped jokes.

So, what is the difference between an English Ford and an American Ford?

English Fords are made in England.

Browne is, himself, a transplant, moving to San Diego from Long Island, New York after being stationed here when he was in the Navy.

“I couldn’t see the point in going back,” he said.

The weather probably has not changed much in Long Island either.

Browne said he has been coming to car shows for as long as he has had a car – his pals suggest he may have started earlier.

“You hang out with the same people every week,” Browne said, shrugging his shoulders and ignoring his friend’s remarks with a good-natured smile. “It’s the club. Instead of a bar, we do this.”

Day on the bay celebrates life for Sharp HospiceCare