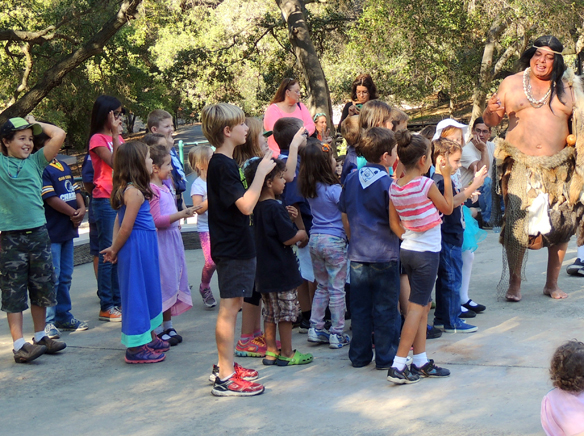 Draped in luxuriant shade by Coast Live Oak trees, Louis A Stelzer County Park was the perfect place for the 2nd Annual Acorn Harvest Festival. Kids of all ages listened to Park Ranger Michelle Levesque explain how the Kumeyaay used acorns for food.

Two bins of acorns were at Levesque’s feet, one of them filled with water.

Draped in luxuriant shade by Coast Live Oak trees, Louis A Stelzer County Park was the perfect place for the 2nd Annual Acorn Harvest Festival. Kids of all ages listened to Park Ranger Michelle Levesque explain how the Kumeyaay used acorns for food.

Two bins of acorns were at Levesque’s feet, one of them filled with water.

“The acorns floating on top of the water tell us that there are bugs inside, so they are inedible. But the Kumeyaay were smarter than us. All they had to do was look at the acorns and know whether or not they were good,” Levesque said.

Kids tried their hands at grinding acorns, while Levesque explained that the Kumeyaay had first to gather and then crack and shell the acorns before they ground them. Then they had to leach out the tannic acid; otherwise, people would get sick to their stomach.

“It’s a lot of work, isn’t it?” Levesque said, grinning at the kids pounding the acorns with stone.

Levesque held a plastic dish of something that looked like hummus.

“This is shawee, what the Kumeyaay made from the acorns. Try some,” she said.

Many of the kids and adults drew back, but a few of them dared to try it. Obed and Sheila Melendez were the first to taste-test. Levesque handed them tongue depressors dabbed with the shawee, and he put it in his mouth. Almost immediately, they grimaced.

Melendez laughed. “It tastes just like the stick it’s on,” he said.

His wife agreed. “But what other choice did the Kumeyaay have? There was nothing else. They used all the resources they had,” she said.

At another booth, kids learned that the Kumeyaay were hard workers. They spent their days gathering, hunting, cooking, and creating utensils and tools, such as a boomerang used for hunting.

Six-year-old Ryan Schultz gave the boomerang a whirl. He jumped up and down when he toppled the stuffed rabbit several yards away.

When storytelling hour came, Abel Silva, whose Digueno name is Acjachemem, met the dozens of kids gathered in the amphitheater.

“I’m half European and half native American because the Spanish forgot to bring their ladies,” he said, to which everyone laughed.

Silva talked about the different place names around the county.

“I think the Spanish loved to add “la” to the end of our Native American names, such as Temecula. Originally, the area was called temecunga, which means place of the sun. And Pala, which means water, used to be just Pa,” Silva said.

The Kumeyaay also had their own story for the creation of California.

“It was all about a beautiful girl named Calafia, which is where we got the name for our state,” Silva said, to the ‘ah-ha’ of everyone in the audience.

“And this beautiful girl created all the flowers and trees you see,” he said.

After Silva’s stories, kids scrambled around on the playground equipment and skittered up massive boulders. Under the oak trees were blankets of leaves nestled among acorns.

The Acorn Harvest Festival has been the personal project of Park Ranger Alex Gilbert, with the idea of celebrating the cultural elements of the park.

“We do have some authentic grinding holes called morteros that the Kumeyaay used when they camped here in the fall and winter along Wildcat Canyon Creek here,” Gilbert said.

Gilbert explained that a natural spring with flowing water even during drought conditions was a factor that attracted the Kumeyaay to the area. The abundance of Coast Live Oaks next to the boulders and the stream in current-day Stelzer Park provided a perfect environment to harvest and grind acorns.

The park has retained much of its natural beauty, but with the Cedar Fire of 2003, many oaks burned to the ground. There is new growth today, but now some trees are dying off because of an insect called the gold-spotted oak borer. But there is hope on the horizon for the park’s trees.

For more information about Stelzer Park, go to ww.sandiegocounty.gov/parks/picnic/stelzer.html.