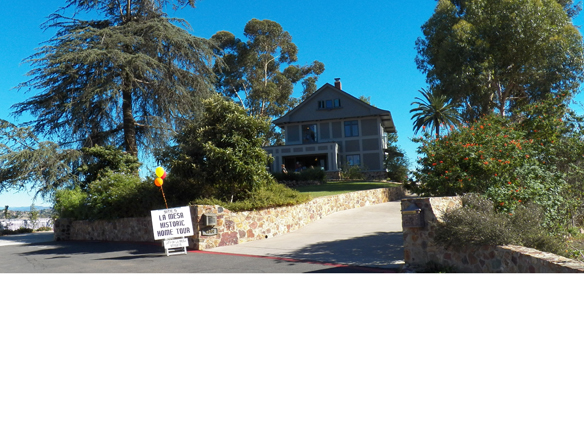 History can often seem to be hidden in plain sight for La Mesans. The La Mesa Historical Society aims to change that, and one project geared toward fostering awareness of the community’s rich history is the yearly Historic Home Tour, which the society organizes and sponsors.

History can often seem to be hidden in plain sight for La Mesans. The La Mesa Historical Society aims to change that, and one project geared toward fostering awareness of the community’s rich history is the yearly Historic Home Tour, which the society organizes and sponsors.

This year’s 10th annual tour, conducted on Nov. 7, squired attendees around to five houses on residential streets not far beyond La Mesa’s downtown village area. These homes were constructed in the first two decades of the 20th century and associated with pioneering developers or civic leaders. The oldest was built 105 years ago, the latest 88 years ago.

An estimated 250-300 attendees signed up for this year’s tour. Each featured historic home demonstrated a different, personalized manner of the current homeowner’s approach in remodeling, preserving, and happily inhabiting an architectural piece of La Mesa history.

Once tour-goers were settled onto Old Town Trolley shuttle buses, intriguing history lessons from society member guides began. Know the significance of “Lookout” in the city? That was the original name of the roadway now called La Mesa Boulevard. What area did “La Mesa” refer to at first? Around 70th Street. And “Allison Springs”? That used to be the name for what is today’s La Mesa “village,” which survives into the present as title for the current-day downtown trolley stop.

The first three homes on the tour were on 3rd Street. Cindy Davis, who owns the house that was Site #1, had an interesting story of how she came into possession of the 1924 Staveley House in 2002. She was looking for an affordable historic home to purchase, when she chanced by 4628 3rd St. The then-owner was outside working in the yard. After they struck up a conversation about her property search, he invited her inside to see his home. She left her phone number, in case the homeowner heard of a similar property for sale. Six months afterward, he called Davis, saying that he wanted to sell, and she bought the house.

After having the home for two years, Davis “redid” the kitchen, including up-to-date appliances. She said she cleaned and painted, then rewired the electrical system and restored the outside of the house with “a lot of family and friends helping.” She has since extended the house from its former single bedroom and bath, adding a family room with a fireplace, a new bedroom, an office, another bathroom and a rear porch, al1 of which match the original design. The cozy Japanese-influenced California bungalow features a small peaked center along the roofline and a carriage house off the rear alley.

Second stop on the tour was the McNeil Residence, which early builder John Hurlburt constructed on speculation in 1914. John and Jeannie Urbanek purchased the home in 1976. John Urbanek described repair and restoration of the historic home as an ongoing project since then.

“I don’t know why the house hadn’t burned down,” he said of the need for completely rewiring the electricity. The couple remodeled the house twice. The front bathroom was accessible only through a living room entry door. A diagonally laid brick fireplace now covers that space. The living room’s original wood molding has been lovingly restored and maintained. The kitchen has been fully modernized with stainless steel appliances and new countertops. The Urbaneks added a master bedroom and bathroom and remodeled the home’s lower level, which now houses a “cat room” dedicated to comfort of their two feline companions. Other Urbanek family members have shared the residence previously.

Site #3 of the tour was built as a Homer Hurlburt residence in 1927. Homer was the son of local developers John and Jessie Hurlburt. The Mediterranean Revival Style corner property was a dilapidated rental for 30 years before the current owners purchased it in 2003 and began a lengthy process of refurbishing the house with complimentary Spanish and Mission influences in the interior and exterior design elements. Many of the original appointments were surprisingly left behind and in good condition, including glass doorknobs, wall sconces and unique light fixtures. The home features expansive outdoor patio areas incorporated into the floor plan, to enjoy the mild La Mesa climate with indoor-outdoor living.

The last pair of tour stops was on Date Avenue. The fourth home has belonged to Michael and Susan Stowe since 2001. The former Rosebrock House was constructed in 1913 for “snowbirds” Herman and Ida Rosebrock in the Craftsman Style. Of the quintet of homes on the tour, the Stowes’ residence possessed notable historicity in integration of restored original design touches into a modernized home. The Stowes are currently engaged in reinstalling and repainting a set of pocket doors intended to block off the living room from the front sitting room (beforehand a first-story sleeping area with under-stairs rollout bed). The open living and dining areas are lovely and airy. The Stowes’ kitchen remodel complemented early tile-work and fixtures with seamless upgrades.

Last, oldest and most impressive home on the tour was the fifth, the Sherman Grable House, built in 1910 and known in its heyday as “Hillcrest” for its hilltop site. Developer and civic leader Grable had the residence constructed in Craftsman Style with prairie-home influences. Design analysts have suggested further plan influences from renowned local architect Irving Gill, although any Gill involvement appeared to have been informal at most. Jeremy and Katie Martinson bought the home in July 2014 for their young family to grow up in. The Sherman Grable House was the largest on the tour, at 2 1/2 stories, and featuring a separate carriage house-garage, and extensive side-yard and rear garden areas. An architect previously owned the property for over a decade and did most of the interior restoration. Martinsons raised and leveled floors in the home’s front space, added a fireplace, and re-landscaped the outside and garden areas surrounding the house.

The tour is one of the society’s biggest yearly fundraising events, with the funds helping to implement the group’s mission of preserving La Mesa’s history and historical collections and archival materials. Tour attendees and outside sponsors provide money that supports the society’s preservation efforts.

Each of these events has focused on a different, specific area within or around La Mesa. Early on each year, society members scout out distinctive and well-preserved area homes for the tour. Some homeowners volunteer their homes as well.

The La Mesa Historical Society operates the Rev. Henry A. McKinney House, built in 1908, as a museum. The facility at 8369 University Ave. is open the second and fourth Saturdays of each month, 1-4 p.m., or by appointment. The society can be contacted at (619) 466-0197, and more information can be found at www.lamesahistoricalsociety.com.