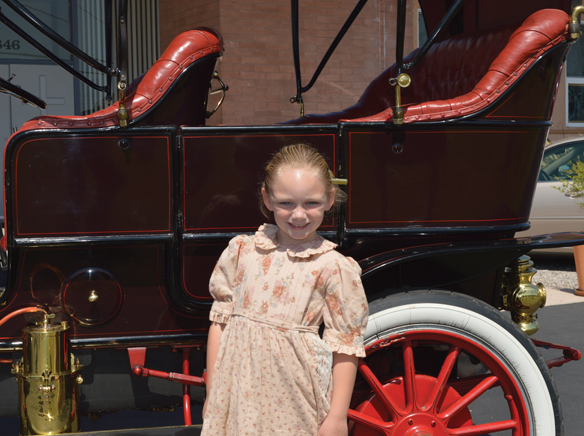 Outside tables were adorned with antique plates, teapots and cups. Women, most dressed in era fashioned clothing dating back to the early 1900s. Inside, women in the kitchen prepared for the tea party with freshly made scones, fruit bowls, soup and finger sandwiches. As the outside tables filled up, fashionable hats and bonnets from decades past paraded as the women sat down for an old fashioned tea party.

Outside tables were adorned with antique plates, teapots and cups. Women, most dressed in era fashioned clothing dating back to the early 1900s. Inside, women in the kitchen prepared for the tea party with freshly made scones, fruit bowls, soup and finger sandwiches. As the outside tables filled up, fashionable hats and bonnets from decades past paraded as the women sat down for an old fashioned tea party.

Beginning as the Prayers to Squares group, the ladies of the Reformation Lutheran Church in El Cajon have long supported the wounded service members returning from war. For years they have made quilts for them, and on several occasions chosen the Warrior Foundation as the charity of their choice. But this year, Billie Shultz, event coordinator said Saturday’s “A Step Back in Time,” Tea and Retro Fashion Show was much more successful than she expected.

Buying $5 and $1 tickets, the community room was lined with baskets of goods, homemade dresses and items and antiques where the ladies placed their tickets in a bag in order to win the prize. A silent auction for a ride for two in a biplane was up for grabs for the highest bidder and partygoers gladly paid the $10 admission, many donating more to help recovering warriors.

Shultz said this year’s fund-raising event was a labor of love, much more successful than she hoped for, but it was the many women of all ages that helped make it happened. She said it was much more elaborate than previous fundraisers and its conception began last September, but the ladies worked relentlessly after the seasonal events over the Christmas holidays.

“We took it one day at a time and each day had a different purpose,” said Schultz. “One day would be hat day, basket day, dress day, then a flower pot day until we got all of the pieces of the tea party and fashion show together.”

Dressed in maternity cloths from a step back in her own time, Alice Unger, who Shultz said is a “walking encyclopedia,” MC’d the show, bringing the history and revolution of ladies’ fashions from the days of the pioneer to the present. Pulling trinkets from her purse like a magician, and the comedy of Harpo Marx, she took the ladies through the days of 17-inch corseted waistlines, to the daring days of showing ankles and legs in public. In between, her cohost, Kelly Schultz, donned in 1920s glittery flapper dress fashion, spoke about the fashions of the period as women young and in their prime paraded the runway through the crowd in vintage wear.

A big hit of the event, Dan and Diane Seeman drove to the event in a 1909 Buick Model F horseless carriage, both in authentic vintage dress of the day and much to the surprise of Billie Shultz, charged $1 to have a picture taken with the classic car, raising more funds for the Warrior Foundation.

Sharon Slay, Freedom Station board member and Maria McDaniel, volunteer coordinator attended the all-ladies event and presented the ladies of the Prayers to Squares group with a certificate of appreciation. At Prayers for Squares presented a quilt, each square drawn by elementary school children giving thanks to the men and women that serve the country.

One hundred percent of proceeds will benefit the warriors through the Warrior Foundation and the Freedom Station, said Billie Shultz.

Slay said the Warrior Foundation and Freedom Station are designed to help wounded warriors from all branches of the military from the moment they arrive back in America until they successfully transition from military to civilian life. She said these organizations provide to wounded and their families in ways that the government is unable to.

“These warriors come here to San Diego with life altering wounds, many rehabilitating from loss of limbs, traumatic brain injuries and post traumatic stress disorders,” she said.
She said some of the things that make her job worth every minute of effort is immediately bringing the family of the wounded here to San Diego to be with their loved one and for every wounded warrior possible, every Christmas they send them to their home town to spend the holiday with their family. But, she said, the road to recovery is much more than rehabilitation in the hospital and recovering from physical wounds.

“Freedom Station is a transitional housing unit set up in the Golden Hill area where we are able to transition our men and women coming out of the military that are being medically discharged and moving on into civilian life,” said Slay. “We are honored to be the charity of choice for this event. They have really put a lot of time and effort into it.”

Happening at your Lakeside Branch Library