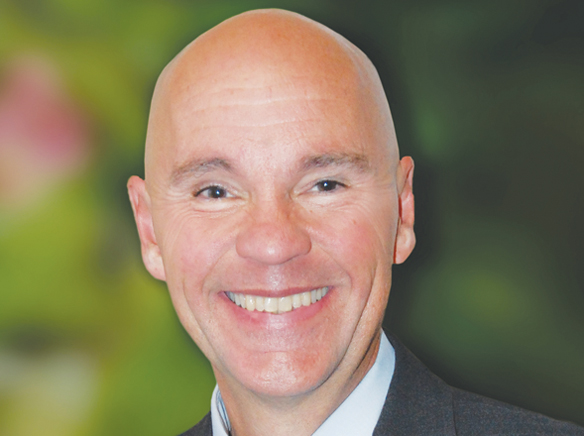 Professionally, life has gone full circle for El Cajon’s City Manager Douglas Williford who began his career at an entry-level position in the Community Development Department, fresh out of SDSU in 1979 at the age of 21.

Professionally, life has gone full circle for El Cajon’s City Manager Douglas Williford who began his career at an entry-level position in the Community Development Department, fresh out of SDSU in 1979 at the age of 21.

After three and one half years he went to what was then the newly developed City of Santee. He said it would “be cool” to go into a new city, be on the ground floor of doing things and thought he would stay in Santee for three years, but walked out 24 years later as the deputy city manager and development services director. Williford then went to the City of Irvine as the community development director in 2006 for four years. . He then moved on to the Southern California Association of Governments for two years running all of its transportation, long-range planning and environmental programs. But in summer of 2011 he heard that El Cajon’s city manager announced her retirement.

Williford said the more he thought about it on both a personal and professional standpoint, because of his love of San Diego, if he could get this position it would be perfect. March marked his first year as city manager and in a one-on-one interview he told his knowledge of the city’s past and its vision for its future.
“It’s been a year and if feels like five months and I’ve always said if it has been five months and it feels like a year, you are in trouble,” said Williford. “It’s all good. It’s exactly what I thought it would be and I have to be honest, the last year has been the most enjoyable in my professional career. ”

Looking at the
potential of El Cajon
“To me the key to a city’s future is finding what it is good at, what it can do, what it can be and what it can’t. Be very honest about it and focus on those things where you can be successful as a community. Then, galvanize the community, both the public and private sector, and focus on those things. You are not going to solve every problem, you are not going to change a city into something it can’t be. It’s not realistic. Focus on what can be done and you will be amazed at what can happen.”

“El Cajon became the dominant city in East County for some very good reasons many years ago. It was geographically centered in this county. It had Parkway Plaza, the largest population, biggest employment rates, only airport, great neighborhoods. And that is why El Cajon can be incredibly successful in the future. Every one of those attributes still exists. It’s a matter of looking at those and seeing how you can build on this. Focus on the positives issues and try and make successes in the community.”

“In the past year, what I’ve done with the city council is really look around this community, identify what those attributes are and then for me, the key is to go start creating partnerships and relationships. There is very little a city manager can do on his own. You have to have a huge amount of help, partnerships, cooperation, like-mindedness and everybody headed in the same direction. If you can succeed in creating this there is no limit to what you can accomplish.”

“I try to use this office to create that outreach, partnerships, relationships, keep people focused on what this city can be and keep pressing, pressing, pressing the issues to improve this community and other people out there take the ball and run way beyond what I can do as an individual. That is what the past year has been and that is what this year is going to be, and the next year and the next.”

East County Performing Arts Center.
“In the big picture, we just went through this horrendous recession where one could logically think that there are no real short-term opportunities. First off the bat, the East County Performing Arts Center (ECPAC). City Council had to close that building almost four years ago for economic reasons. Mid last year they held a couple of meetings and the result of that discussion with the people in the community is that we are in the process of putting the plans together to reopen ECPAC. I think 2014 is a realistic time to say it will be reopened.”
“Grossmont High School Union District voted 5-0 to commence an exploratory discussion with the city about either joining us as partners in reopening ECPAC or even maybe building a second, multi-purpose adjacent building that the school district would utilize for almost all of its campuses in a variety of different ways. To turn, not only the ECPAC, but the entire idea into a regional event center. That is huge for downtown El Cajon, the city and the entire East County.”

El Cajon Automobile Association
“New auto dealers have been in the city for at least six years. Council members and myself felt that dealerships in El Cajon could be a little bit more cohesive. We called them together last year, something that apparently had never been done, and asked them if it would be of benefit to them to create an El Cajon Automobile Association. Get together with advertising and sales. That discussion happened and lead to the first ever totally coordinated El Cajon Valley of Cars Auto Dealers Sale. Advertising started with television, newspaper, and radio with 12 new auto dealers participating, and San Diego Credit Union working with them with less than one percent interest rates. This is another example of the city government working with the private sector, looking for a way to help them be successful.”

Kaiser Permanente
“Kaiser Permanente is going to build a major hospital/campus on East Maine in the latter part of this decade. They own the property and will bring more than 2,000 new jobs between construction and actual Permanente doctors, nurses and staff, making it the largest private employer in the city. This will be a major campus that will eventually replace the Zion campus. We hope for the first phase in 2017-18 and expect the second phase after 2020. This is so big we think it will revolutionize the business climate in East El Cajon, if not the entire city. I personally believe this is the biggest economic shot in the arm for El Cajon since the construction of Parkway Plaza. It will be an unbelievable attribute to this city and to the whole East County in every way imaginable.”

Hotels
“This city has been pursuing a high quality four-star hotel for many years and because of the recession was unsuccessful. We have been in discussion with Marriot Hotel Corporation for well more than a year now. We believe for the first time in this city’s history that it is a possibility for downtown. It is time for East County to have that level of hotel service. It is a long process and we have a ways to go but our talks with Marriot have been very positive over the past year. ”

The affects and solutions of the loss of redevelopment agencies
“Similarly to every other town in California, the dissolution of redevelopment agencies has made the projects that much more difficult to accomplish. I found redevelopment an extremely valuable and effective tool for cities to create that kind of growth. That is what it was intended to do and that is what it did do. I think the State made a serious error in taking those agencies away. They created new jobs, new development, so the tool is gone. We have to find innovative ways to use the resources we do have to help the private sector develop new development.”

BMW.
“A real example of this is we engaged in a discussion with BMW. They have an old facility, they wanted something new and were not sure if they could get that in the city. We want them to stay here and be successful. They asked for the kind of assistance that redevelopment dealt with all the time, help with the infrastructure. That’s what cities do. We don’t have redevelopment agencies, so we thought outside the box.”
“We’ll put together a tax share with BMW. For additional sales tax they generate from building a bigger and better facility, only based on their future potential success. We negotiated a deal where we would get some of that and they would get some of that for a period of 15 years, and it would all go to the city after that. The amount they would get for the 15 years would be the amount that the city would normally be able to invest for infrastructure with redevelopment funds. City Council was very interested in this to the point that BMW is in the permit process today. They are going to build a state of the art facility, better than anything that BMW has ever built on the west coast. That is going to be under construction this calendar year.’

“The dissolution of redevelopment made it far more difficult than it ever would have been, but this is a prime example of how building relationships with the private structure can still work to create growth and jobs within our community. What the state did was a short-term fix at the expense of long-term productivity. We will do what we can without redevelopment and BMW is an example of what we are going to do.”