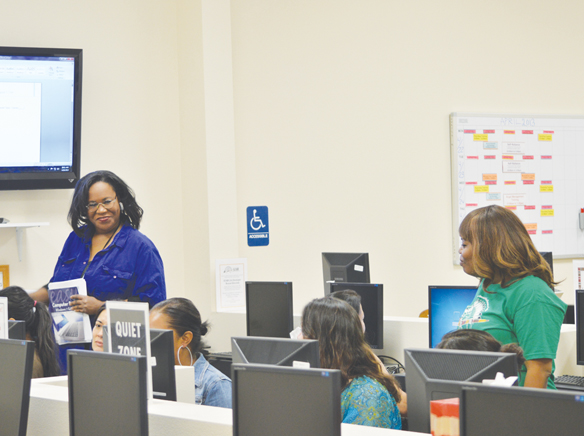 “A Native American grandfather talking to his young grandson tells the boy he has two wolves inside of him struggling with each other. The first is the wolf of peace, love and kindness. The other wolf is fear, greed and hatred. ‘Which wolf will win, grandfather?’ asks the young boy. ‘Whichever one I feed,’ is the reply.”—Native American Comanche quote.

“A Native American grandfather talking to his young grandson tells the boy he has two wolves inside of him struggling with each other. The first is the wolf of peace, love and kindness. The other wolf is fear, greed and hatred. ‘Which wolf will win, grandfather?’ asks the young boy. ‘Whichever one I feed,’ is the reply.”—Native American Comanche quote.

It began 18 years ago with William H. Johnson. A quiet and simple man, he always knew what he wanted to do-to give back to the community and help people. Comanche and Cherokee, he noticed there were not many services for the urban Indian not living on a reservation. He founded the Southern California American Indian Resource Center (SCAIR), a lifelong vision.

Now, his daughter, Wanda Michaelis, SCAIR executive director said her father’s dreams are a constant reminder of why they exist.

“He loved children and would have had 50 of them if he could have,” she said, “He took some money out of his retirement, started out by hiring a consultant who helped get us incorporated, get us going and we applied for one small grant after another.”

Randy Edmonds, cultural advisor, said the purpose of SCAIR is to provide different kinds of services for Native American Indians in San Diego County. A spiritual man from the Kiowa tribe of the Caddo Nation, he delivers prayers for events, asks the Great Spirit, the creator, to bless the event of the day. He is an instructor of Gathering of Native Americans training.

Edmonds said there is a need for this because American Indians and a many people do not know SCAIR services are there to help the urban American Indian.

Michaelis said what Edmonds does is invaluable, bringing the feeling of the generations that become before and after and that the younger people love him.

She said it was a long road, difficult times with funding, but SCAIR is here now and looking for more support to continue the educational and cultural services it provides. SCAIR began with two offices, one at Barona and the other in Alpine, but is celebrating its one-year anniversary in El Cajon this summer.

“We are very excited about it,” she said. “We acquired a lot of donations to help us remodel and our family and friends all worked together and kept our cost down so we were able to move into this larger center from our two smaller offices. So now, everybody is together at one location. It is a blessing and journey to help support people.”

Bill Johnson, SCAIR president said Michaelis asked him to step in when their father passed and taking over the family dream was a learning curve for him over the past seven years. A retired federal fire fighter, he is also the resident safety officer and instructor.

“I am a man of many hats,” said Johnson. “I do everything from cleaning the toilets to training.”
Frank Pancucci, SCAIR program coordinator said he began working with SCAIR as an intern while earning his master’s at UCSD with Johnson hiring him half way through his internship. As his position progressed, he became much more involved in the programs.

“We are always trying to mix things up, being creative with new ideas that get our participants interested and plugged in,” said Pancucci. “We have done everything from partnering with other organizations to creating workshops. I oversee interns and we have a strong connection with UCSD counseling.”

Pancucci said SCAIR continuously growing, created a Native Teens Program, a counseling and mentoring program for teens, received a tobacco prevention grant for Native American teams with an event in July to kickoff that program.

“This program will also distinguish difference between commercial use and traditional smoking that is used for ceremonial purposes,” Pancucci said. “We do specialized workshops like CPR/First Aid, personal responsibility, self alliance training, nutritional training, dressing for success, career expos, resume workshops and more.”
Michaelis said it is important to keep things interesting, not only for the participants, but also for the staff and even with SCAIR’s successful programs, many of the state and federal grants they utilize for services are under sequester.

“It is important to keep these programs going,” she said. “We humbly ask for people to donate to academics, clothing and food or whatever they can give to help the most needy. We follow a prayer, not really a prayer but more of a mantra for us because all of us help people. We receive donations 365 days a year and we give 365 days a year.”

SCAIR is located at 239 E. Main Street in El Cajon. For more information on the services that it offers or donations visit www.SCAIR.org.