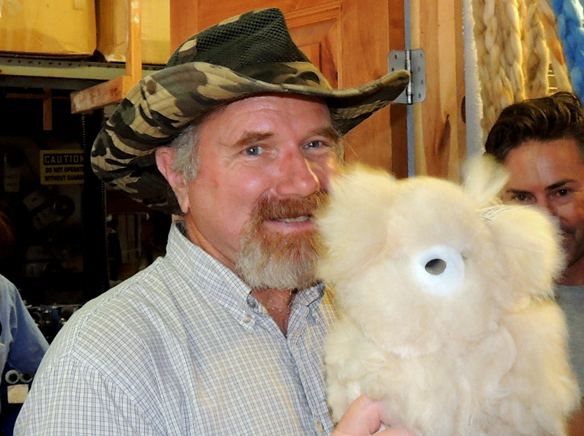 Alpaca fleece is the softest imaginable. Its light-as-clouds feel inspired Dave Davies, a Crest resident, to start his own alpaca ranch and business with his family on the four acres where they lived.

It all started on a vacation on a resort in Pagosa Springs, Colorado in 2000. The Davies were invited by a gentleman to come out to an alpaca ranch to see the animals.

Alpaca fleece is the softest imaginable. Its light-as-clouds feel inspired Dave Davies, a Crest resident, to start his own alpaca ranch and business with his family on the four acres where they lived.

It all started on a vacation on a resort in Pagosa Springs, Colorado in 2000. The Davies were invited by a gentleman to come out to an alpaca ranch to see the animals.

“We were intrigued when we felt the teddy bear he had that was made out of alpaca, so thought we would go see what an alpaca was,” Davies said.

The Davies ended up spending most of the week at the place learning all about the animals. They were impressed by how gentle, quiet and clean the animals were. Alpacas are easy to care for, they found out, as one bale of hay will feed an alpaca for a whole month.

“They will not gorge, so you can put extra food out and go away for the weekend,” Davies said. And they will literally wait in line to use the poop pile, so clean up of their pens is very easy.”

The more the Davies learned, the more they realized that they had just stumbled upon the perfect livestock choice, especially since they would not have to butcher them to harvest their product. Their luxurious, soft fleece is a renewable resource that grows back every year.

“By the end of the week we bought four alpacas and started this wonderful adventure. After 14 years with alpacas we still have not found any down-side to raising them,” Davies said

And so A Simpler Time Alpacas and Mill became a reality. On a recent monthly open house at the ranch, Davies and his wife, Barbara, gave a tour of the mill in which they process the yarn. Davies showed the two fiber separators and de-hairers used to get the vegetation and burrs out of the fluffy fiber. From there, they make silky long ropes or light bundles in skeins of yarn. Between 75 and 100 pounds of yarn are made in a month as well as 40 to 60 pounds of roving and batting.

One lot can take about a week to be processed from raw fiber into finished yarn. It can take a full month to get through a full color cycle in the mill. Since alpacas come in 22 natural colors, the machines have to be run by color and cleaned out after each color.

“Making yarn is very labor intensive,” said Davies, who starts out the day by cleaning the pens in the back of the barn. Then he works in the mill for the rest of the day.  He also handles computer problems, website development, animal transportation, and tours.

Barbara Davies handles questions about the animals and breeding, as well as alpaca sales. She books tours, handles accounts payable and accounts receivables, purchasing and is liaison to the customers. The rest of her day is spent tending to the needs of the family.

The family is close-knit, working side by side. Dave and Barbara Davies take pride in their crop of nine children, two of who are married.

“The biggest challenge is probably keeping a good balance of work versus family time,” Barbara said.

The family’s biggest expense in running the farm and mill is hay and electricity.

“The biggest joy,” Dave said, “is seeing the smile on people’s faces when they spend time in the pens with alpacas.

And for people who visit the alpacas, the biggest surprise is how sweet the animals really are.

“They think that alpacas will spit at them. This is not reality. Alpacas tend to be timid animals and people are rather intimidating to them. They will use spitting occasionally to communicate to each other, but not usually to people,” Dave said.

In fact, the alpacas will make a little humming sound when they are content. When they breed, they actually make a sound like singing.

“We are called A Simpler Time because we work to make your visit here to be not only enjoyable but kind of like you took a step back in time when we valued many of the simple pleasures in life: family, friendship, faith, fun, and fiber.

“And the most adorable animals this side of heaven,” Barbara Davies said.

The farm is open to the public about once a month for free tours of the alpacas and fiber mill. Information about the tours is posted on the website at www.ASimplerTimeMill.com. The Davies has a retail store on site that is open by appointment.  Call 619 579-9114 or email ddavies@dslextreme.com. An online store has been made available at www.ASimplerTimeStore.com.