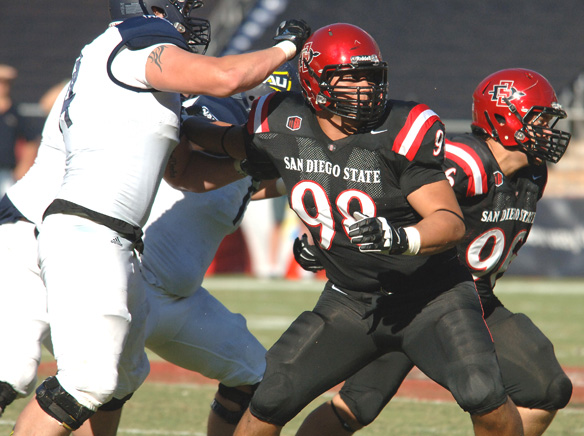 It's one thing to be the big man on campus in high school but quite another thing to excel on the college gridiron.

San Diego State University head football coach Rocky Long cautions young prep recruits from finding immediate success in the collegiate ranks. He said the jump from high school, or even the community college level, is a major one that many players are just not prepared to make initially.

It's thus been a gradual progression rather than instant immersion for many talented players.

It's one thing to be the big man on campus in high school but quite another thing to excel on the college gridiron.

San Diego State University head football coach Rocky Long cautions young prep recruits from finding immediate success in the collegiate ranks. He said the jump from high school, or even the community college level, is a major one that many players are just not prepared to make initially.

It's thus been a gradual progression rather than instant immersion for many talented players.

“You're playing against bigger, stronger and faster people, and the game is faster,” Long noted. “Some guys take a long time to adjust, some guys just overnight.”

Eleven Aztecs, including eight on defense, made their first NCAA Division I career start in Saturday's 38-7 non-conference victory against the Northern Arizona University Lumberjacks at Qualcomm Stadium. Among them were two East County products: Spring Valley's Micah Seau and Lakeside's Robert Craighead.

Craighead, a junior tight end out of El Capitan High School, had made 21 appearances for SDSU over a two-year playing period before earning his first start. He made the most of it by catching a two-yard touchdown pass from Aztec senior quarterback Quinn Kaehler 29 seconds before halftime to give the hosts a 24-0 lead.

It was Craighead's lone reception of the game. He entered the season with five receptions for 32 yards, including a 17-yarder in a 2013 game at Ohio State.

Seau, the nephew of the late Chargers great Junior Seau, appeared in 12 games last year for SDSU. The sophomore linebacker out of The Bishop's School collected an assist on one tackle against the Lumberjacks while also making one pass break-up and one pass-deflection in his first start.

Seau was credited with 10 tackles last year in a back-up role, including three unassisted tackles.

Long was complimentary of Seau's showing.

“I think he's matured as a player and understands the scheme better,” Long said. “He knows where to line up and what to do. I think he's got a long way to go before he's considered a great linebacker, but he's got some natural ability. In high school, you saw a world of potential just because he's a big guy (6-3, 260) who moves around really well. His high school level of competition wasn't at the top level, and I think it's been a little bit of a shock to him how good the athletes are at this level compared to what he played against in high school, and I think he's still adjusting to it.”

Meredith was credited with two tackles in the season opener and one pass break-up and one pass deflection while also sharing credit for one tackle for a loss. The former Highlander star entered the season having appeared in 33 games for SDSU with 19 starts.

In those 33 games, Meredith had collected 56 total tackles, including 32 unassisted tackles, two sacks and eight-and-a-half tackles for a loss. He was voted honorable mention All-Mountain West as a true sophomore in 2012 and also named the team's defensive lineman of the year.

Alesi, a senior punter, had three punts for a 35.0 average against NAU. He started all 13 games last season, averaging 39.4 yards per punt.

Munson had the biggest impact with a 64-yard interception return to the one-yard line to set up SDSU's fourth touchdown of the game. It was Munson's first career interception.

Kaehler, a former standout at Diablo Valley College, was thrown into the starting position against Oregon State in the second game last year. Kaehler admitted it was difficult to make adjustments despite finishing the season 8-3 as a starter and throwing for 3,007 yards and 19 touchdowns.

“It's tough when you get thrown in there, but there's no experience like playing,” the Aztec signal-caller explained. “The best way to learn how to play the game is by actually taking live reps.

“I think it progressively gets easier and it continues with the reps you get. I'm still learning things today. I really started to feel comfortable a couple games into (becoming the starter), but you still learn things each and every week.”

Kaehler finished Saturday's game against NAU with 205 passing yards, one touchdown (to Craighead), one interception and one sack.

Sophomore running back Donnel Pumphrey (Las Vegas, Nev.) led the SDSU ground game with 111 yards on 19 carries, including a pair of one-yard touchdown runs, while also making one pass grab for 31 yards.

Overall, the Aztecs piled up 399 yards in total offense against the FCS Lumberjacks.

Long praised the works of his team’s offensive line that included sophomore left guard Nico Siragusa, a former prep standout at Mater Dei Catholic High School in Chula Vista. Siragusa appeared in 13 games with one start last season for SDSU, including its victory in the Famous Idaho Potato Bowl against Buffalo.

Overall, Long was pleased with his team's performance in its season opener.

Junior kicker Donny Hageman (Mt. SAC) split the uprights on a 48-yard field goal in the second quarter. It was the longest successful field goal attempt by an Aztec since Abel Perez (Castle Park, Southwestern College) hit a 53-yarder against UNLV on Nov. 27, 2010.