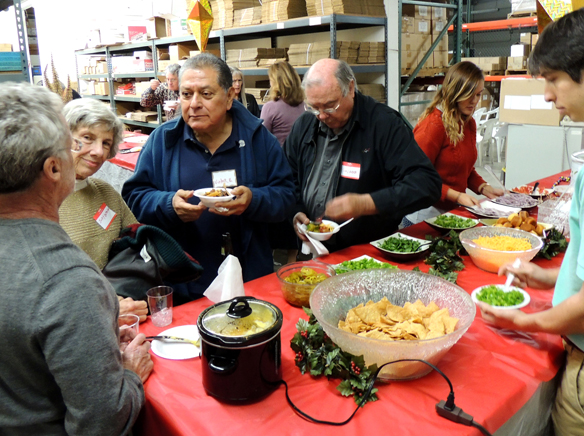 Bundled up from the cold, book-lovers walked into Sunbelt Publications for a feast of books and food last Thursday, Dec. 5. The annual holiday party featured owner Diana Lindsay’s famous chili with all the fixings. The steaming mixture of corn, beans, tomatoes and meat took the edge off the chill.

Sunbelt is a favorite of outdoor enthusiasts within the local community. Owners Diana and Lowell Lindsay are revered for their passion for the natural world. They invited authors to speak about their books for the evening.

Bundled up from the cold, book-lovers walked into Sunbelt Publications for a feast of books and food last Thursday, Dec. 5. The annual holiday party featured owner Diana Lindsay’s famous chili with all the fixings. The steaming mixture of corn, beans, tomatoes and meat took the edge off the chill.

Sunbelt is a favorite of outdoor enthusiasts within the local community. Owners Diana and Lowell Lindsay are revered for their passion for the natural world. They invited authors to speak about their books for the evening.

“Welcome to this 25th anniversary of our holiday party,” Lowell Lindsay said to the guests supping on chili while they sat on chairs in the warehouse behind the office. “We have three authors featured tonight.”

Right away, things heated up with the introduction of an Australian Shepherd, one of the stars in “Love on a Leash,” a book by Liz Palika about a pet therapy program. Lowell Lindsay introduced Margaret Eggers, who is also a board member in the San Diego association of Geologists. “Eggers has more lives than I knew,” she said.

Eggers laughed. “I never thought I’d have a dog, much less be involved with a pet therapy program,” she said.

Eight years ago, Eggers had adopted a dog from a rescue.

“I soon found out why the dog was up for adoption. He was out of control,” she said.

But through a dog-training program, the dog became calm enough to do pet therapy.

That is how she discovered Love on a Leash.

“I found out that dog training is really more about the training of the owner on how to work with our pets,” Eggers said.

“Together these authors have 50 years of combined research,” Lindsay said.

A high school chemistry teacher, Freers is a self-taught anthropologist. After discovering several rock art sites on a trip through New Mexico, he pursued others who had a similar interest. He met Ron Christenson, who heads up the American Rock Art Research Association and Jerry Dickey. The three of them co-authored the book.

For the last 25 years, they have trekked the endless inches of Grand Canyon Regional Park. They worked in partnership with Kaibab National Forest, Grand Canyon National Park, Bureau of Land Management/Arizona Strip, and the Grand Canyon-Parashant National Monument to analyze the Native American images engraved and sketched into the boulders and cliffs of the greater Grand Canyon Region.

“I’ve crawled on ledges sometimes just four inches wide just to get a photograph of a petroglyph,” Freers said.

Some of the petroglyphs date back to the Archaic Rock Art era, about 5,000 B.C. Freers explained that the entire region of the park is 1,904 square miles. Only 9 percent of the area has been formally archaeologically surveyed, but more than 450 rock art sites have already been found.

“Many of the rock art sites are just below where people are standing on the South Rim. They’re completely unaware of it,” he said.

Yet it is the objective of Freers and the other authors to keep the rock sites from being damaged. Out of respect to the Native American community, the authors decided not to publish or print certain sites in the book.

“We tend to love these things to death, so we need to be sensitive and responsible to protect our resources,” he said.

The next author presentation was by Cari Gomes, who penned “Waiting for Tsunami: Coastal Hazards of Northern San Diego County.” Gomes, a member of the San Diego Association of Geologists, said that the association published the book.

The book is the result of eleven technical papers published after a group of geologists went on a field trip last year to north coastal San Diego County, beginning with Guajome County Park. From there they went along the coast, from La Jolla to San Onofre. They hiked seven miles with seven stops, including volcanic Cerro de la Calavera in Carlsbad. Morro Hill, another volcanic rock form, is located on the boundary of Camp Pendleton.

Gomes said that the volcanoes are reminders that the region is known for its earthquakes, which cause tsunamis. “Earth is always in motion. Some rocks look stagnant, but they are really dynamic,” he said.

In closing, Gomes said, “I got quite immersed in tsunamis—well, not literally!”

Everyone clapped, laughing. Then they went to get more chili and buy more books.

For more information about Sunbelt Publications, go to www.sunbeltpub.com.

And the show went on

Mt. Helix raises needed funds with a little help and...