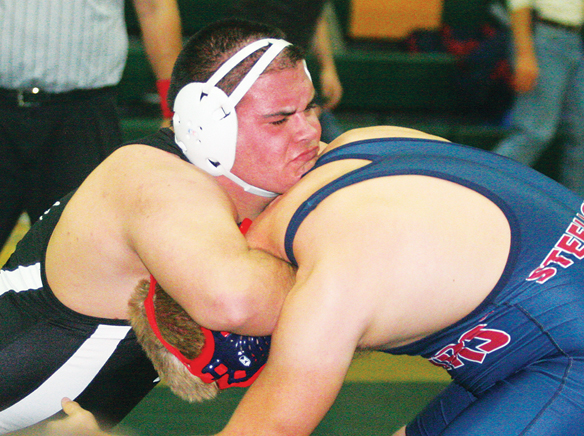 John Liljestrom’s first year as head coach at his alma mater was one to definitely remember as the Monte Vista High School wrestling team captured the Grossmont Valley League championship.
His second year at the Monarchs’ helm could even be more rewarding.

John Liljestrom’s first year as head coach at his alma mater was one to definitely remember as the Monte Vista High School wrestling team captured the Grossmont Valley League championship.
His second year at the Monarchs’ helm could even be more rewarding.

“Last year was a building and growing year,” said Liljestrom, a 2002 graduate of MVHS and a former CIF championship wrestler. “It was part of a learning curve for both me and the team.
“We’re better this year. We lost only a couple of our wrestlers to graduation. Our goal is to go undefeated in dual meets and we feel we’ve got an outside chance at winning CIF. We’ve got Brawley and Ramona in our division, so it’s going to be tough.”

The Monarchs opened the 2012-13 season with a 56-18 non-league victory against longtime rival Valhalla on Nov. 29 and followed that up with a second-place finish at the 28-team Battle by the Beach tournament last Saturday at Mar Vista High School.

Serrano pinned Castle Park’s Daniel Hernandez in 5:15 to win the 182-pound division while Briggs out-pointed Houston by an 8-1 score and Meza recorded a 7-3 decision against Stately in a pair of all-East County title match-ups.

Meza finished second at last year’s San Diego Section Division III finals and is looking to take the next step by qualifying for the state championship meet.

“My goal is to go to state and place at state,” said Meza, who recorded three consecutive pins to reach the Battle by the Beach championship bout. “I was not ranked in the preseason but I have beaten those who have been ranked.”

Meanwhile, the varsity tournament gold medal was a career first for Briggs, who recorded pins in his first two matches. “It feels good,” the GHHS grappler said. “I just want to take it each match at a time and just keep improving.”

Steele Canyon has won five consecutive league titles but looks to be challenged for this season’s Grossmont Hills League championship.

Steele Canyon head coach Dan Kida said his team needs to prove itself on the mat if it is going to repeat as league champions.

“I have no preconceived ideas for this team,” Kida explained. “I’m waiting for them to develop and see how far they go. This was a good showing for us at this tournament. It shows we’ve improved.”
El Capitan 106-pounder Emilio Rouse earned the fastest pin award at the Mar Vista tourney by recording a 15-second fall.