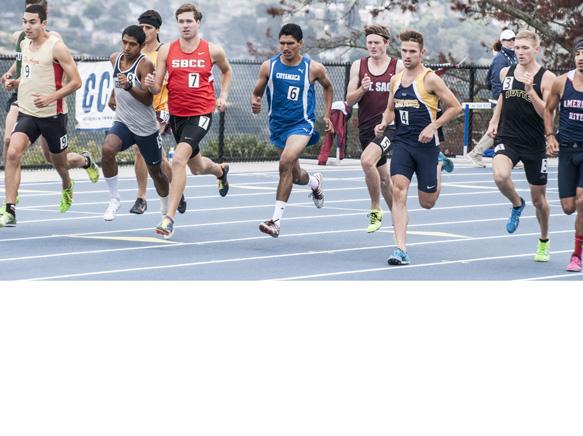 Overlooking the San Francisco Bay on a typical Northern California spring afternoon, a handful of Cuyamaca College athletes roamed the track at College of San Mateo as they wait for their events. Not even the brisk wind could break their concentration from the moment at hand—the California Community College Track & Field Championships.

Overlooking the San Francisco Bay on a typical Northern California spring afternoon, a handful of Cuyamaca College athletes roamed the track at College of San Mateo as they wait for their events. Not even the brisk wind could break their concentration from the moment at hand—the California Community College Track & Field Championships.

“It’s just wonderful,” he said. “When you work with a kid for two years and he does everything that you ask him to do and he comes to the state meet and he jumps a P.R. It’s just exciting.”

Law and state champion Reed Scale of Mt. San Antonio College were locked in a dead heat for the final spot. Scale nailed his first attempt at 16-feet-four-inches but Law ceded the tiebreaker to Scale when he needed two tries to clear the bar. As the bar was raised to 16-feet-10-inches (5.13m), the infield buzzed in anticipation of the one-on-one showdown.

Both Scale and Law missed their first two vaults. Law had never attempted that height before but was well-positioned when Scale could not vault high enough. Law could win the state championship on this jump, but a miss would do the same for Scale.

Law’s short blond hair seemed like a blur as he sprinted towards the box and planted. He turned in the air and extended, his feet, legs and torso clearing the bar. His chest, however, ever-so-slightly grazed the bar, knocking it off of its stand and eliminating Law from the competition, though his new P.R. was tied for the third-highest community college vault in the nation.
Cuyamaca head coach Patrick Thiss said he was proud of Law.

“He’s over the bar,” he said. “If it’s 16’ 9-and-a-half he would have won the state title but it was 16-10 today. You can be nothing but proud to have one of your athletes compete so hard at the biggest meet of the year and be happy for him.”

“As soon as I jumped it, I thought I was over it,” he said. “Just barely nicked it off. I’m still really happy about it though.”

Cuyamaca freshman Oscar Soto also set a new personal record in the 800m run, finishing fifth with a time of 1:53.48. Sylvia Longworth set a school record in the 3000m Steeplechase at the Southern California Championships last week but was injured on Friday night during a warm up run. Thiss said Soto and discus thrower Jovann Letuli, who did not reach the final round at the state meet after also breaking a Cuyamaca record last week, will take over for Longworth and Law.

“These are kids that have worked hard and done all the right things and are the leaders,” he said. “Now these kids aren’t always vocal leaders, sometimes they’re just leaders by action. Everything like being in the front row of your class or going to the library to study between classes, to showing up on time… all the little things that the freshmen need to learn and sometimes don’t know when they come in.”

Thiss also said the experience will help next year’s athletes recognize their accomplishments.

“You get to the championship meet and you perform,” he said. “All you can do is your best. If your best is better than everybody else then you’ll win, if not then you get beat.”

Law seemed to take Thiss’s final piece of advice to heart. His grin spread from ear-to-ear as he immediately shook Scale’s hand to congratulate him on his state championship.