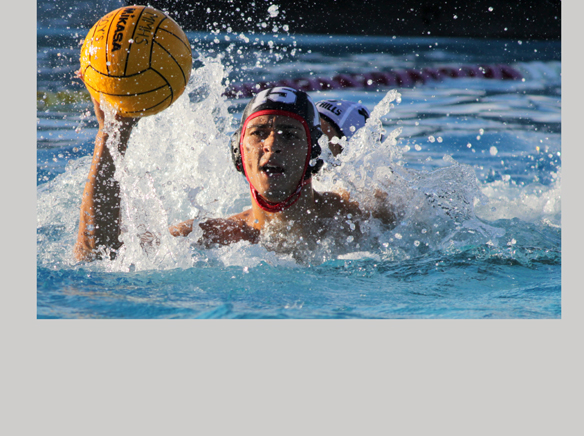 Prowling their way into the Matador’s pool on Thursday, Oct. 13, brimming with confidence and carrying a season of successes, the West Hills Wolfpack was ready for a good game. They are fighting for the top spot with Helix and have their sights set on winning league and championing the CIF meets that will follow.

Prowling their way into the Matador’s pool on Thursday, Oct. 13, brimming with confidence and carrying a season of successes, the West Hills Wolfpack was ready for a good game. They are fighting for the top spot with Helix and have their sights set on winning league and championing the CIF meets that will follow.

The Matador’s have a different vision of success, one it can find even in a losing season.

West Hills won the match handily, 15-6, but Matador head coach Michael Malone said he was pretty pleased with the game.

“We played them earlier in the season and they won considerably,” said Malone. “I think (we’ve) improved a lot. And not only that, but both teams had fun and that’s more important.”

Mount Miguel is still swimming in the shallow end of competition this season due to a previous lack of coaching and low interest, said Malone, who took up the position in August.

“I want to instill consistency,” he said. “They’ve had different coaches and they’ve had to cancel seasons because of lack of players, but now I’m taking the reigns and I want to develop a program. It takes baby steps.”

Matador senior and team captain Joseph Sanferrare said working with the younger players has been a good experience. Sanferrare is one of only three seniors on the team.

“It’s difficult and challenging, but I got a job as a swim instructor over the summer and I learned how to teach, so I’ve been teaching (the new players) a lot of skills,” he said. “I try to push them without scaring them because a lot of them are kind of intimidated. I’m just trying to keep it sane and friendly.”

It seems to be a catching attitude. Despite the pounding they received from West Hills, the Matadors continued to play with vigor and good spirits, even scoring in the last few minutes of the game.

“Our attitude is our greatest strength,” said Sanferrare. “Our attitude and our spontaneous bursts of energy. When our team is confident, there is no stopping us. I don’t think we’ve ever played a game where we ever just gave up and gave in.”

West Hills, though serious in their aims for the season, approached the game with a similar attitude, said Wolfpack head coach James Searls.

“We came in and we don’t want to run the score up on the other teams,” he said. “We just want to have some fun putting other people in the cage to play goalie and just make the best we can for some of our league games.”

Coming off a particularly painful loss to the Highlanders last week, a fun game was just what the doctor ordered, said Wolfpack senior and team captain Brice Allen.

“This kind of takes away the stress of a hard, tough game and we can just relax and play water polo,” he said. “We kind of came off a tough one against Helix, but coming back right now, we’re getting our confidence up so we can go back and beat them.”

With a league win just within reach, Searls said the team has not lessened the intensity of their efforts.

“We have dedicated kids,” he said. “They play year-round, they play together and they play hard.”

While Searls and his Wolfpack boys push towards a league and hopefully CIF title, Sanferrare said he just hopes his Matador teammates learn to love the game.