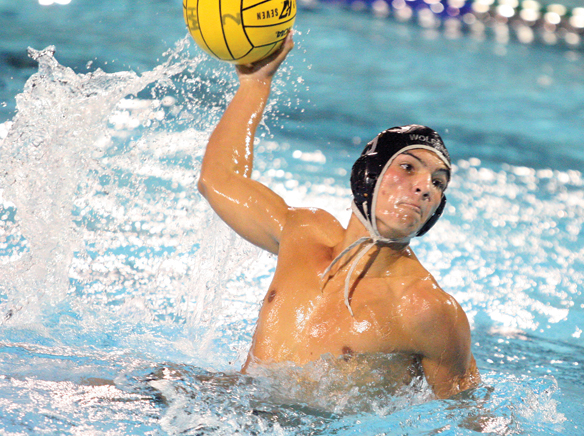 “Our goals were two-part this season — to get to 20 wins and make it past the first round of the playoffs,” WHHS coach James Searles said.

“Our goals were two-part this season — to get to 20 wins and make it past the first round of the playoffs,” WHHS coach James Searles said.

The Wolf Pack, seeded seventh in this year’s San Diego Section Division II playoff bracket, picked up its 20th victory of the 2012 season when it topped the 10th-seeded Hilltop Lancers, 15-9, in a first-round match-up.
The win propelled West Hills to the quarterfinals, where the Wolf Pack (20-11) ended its season with a 15-6 setback to second-seeded University City on Nov. 10.

Searles noted that the win over Hilltop always will occupy a milestone in the program’s history.“That’s a very special win,” he said.

The campus pool, built at a cost of $4.2 million, opened last spring in time for the swim season. The impact of the pool was immediate: the team no longer had to share pool time at Santana High School for practices and “home” games.

It also served as an invaluable recruiting tool. This year’s West Hills team is larger than ever. “It’s built a sense of community at our school,” Searles said. “It’s made for a much better atmosphere at our games.”
It was obvious fans thoroughly enjoyed the team’s first-ever official home playoff game as they chanted “Wolf-Pack! Wolf-Pack!” with each West Hills goal.
Searles called the atmosphere “amazing.”

The WHHS coach attributed his team’s success this season to strong defensive play.
The Wolf Pack recorded 11 field blocks and 14 steals against Hilltop to go with 16 saves by senior goalie Eric Osborn, an all-tournament selection at the East County Invitational.
Osborn limited Hilltop senior Nick Howard, the state’s scoring leader with 199 regular season goals, to three goals in the first half — six total in the game.