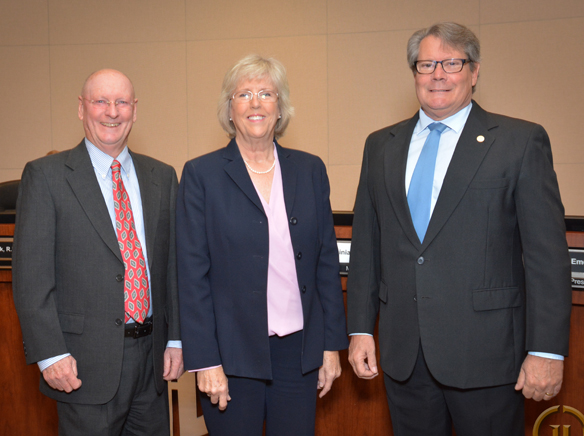 Two longtime Grossmont Healthcare District (GHD) board members retained their seats in the recent November 2016 election, plus voters elected a new face to join the five-member board that represents more than 500,000 people residing in the district’s 750 square miles in East County.

Two longtime Grossmont Healthcare District (GHD) board members retained their seats in the recent November 2016 election, plus voters elected a new face to join the five-member board that represents more than 500,000 people residing in the district’s 750 square miles in East County.

East County voters reelected Robert “Bob” Ayres and Michael Emerson to four-year terms. In addition, Santee resident Virginia Hall was elected to a four-year term as a new board member. A seat on the GHD board became available when Betty Stieringer, a retired Registered Nurse and board member since 2012, decided not to seek reelection.

Ayres, a retired banking executive with 50 years of experience in both public and private-sector banking and construction financing and management, joined the board in September 2010 to fill a vacancy. The El Cajon resident was then elected to a four-year term in November 2012.

A nursing school graduate of Grossmont College (1978), Hall worked in healthcare from 1973 to 2004. Her nursing background includes working in several local hospitals, emergency rooms, clinics and research facilities. In addition, she has participated on research boards, presented at several national nursing conferences and been published in medical publications. Starting in 1997 at Scripps Clinic, Hall worked as an orthopedic nurse clinician and in the research division. Her findings on the partial knee replacement were published in a medical journal. She also authored an educational brochure to help patients prepare for surgery.

Since 2004, Hall has worked in real estate and has been active in the Santee-Lakeside Rotary Club and as 2016 president of the Santee Chamber of Commerce. Her husband Ronn has served as a member of the Santee City Council since November 2014.

GHD, an East County regional public agency that supports various health-related community programs and services in San Diego’s East County, serves as landlord of Grossmont Hospital’s property and buildings on behalf of taxpayers. GHD was formed in 1952 to build and operate Grossmont Hospital. Today, the hospital is managed and operated by Sharp HealthCare under a lease agreement between GHD and Sharp HealthCare, which was extended by voters in 2014 for an additional 30 years. For more information about GHD, visit www.grossmonthealthcare.org.

A day in the life of an El Cajon Marine deployed...