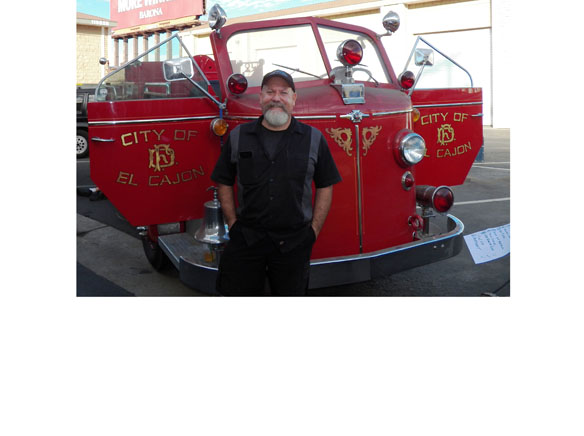 Once upon a time…

The Mother Goose Parade is all about fairy tales represented in real life.

Once upon a time…

The Mother Goose Parade is all about fairy tales represented in real life.

Actually, the real-life time was April 2014, when the El Cajon Professional Firefighters Foundation received a touching gift. Meg Buxton, widow of the late Gil Buxton, donated his disabled 1950 American LaFrance fire engine to the firefighter nonprofit. Buxton, a longtime East County businessman and community leader, served as president of the Mother Goose Parade. One of his prized efforts on behalf of the annual event had been loving restoration of the vintage truck as a parade vehicle.

Buxton started in 2002, purchasing the firefighting engine, and then rebuilding most of it. He first drove the refurbished fire engine in the 2005 Mother Goose Parade, and then again in the 2006 parade.

But somewhere along the way, the fire engine’s radiator failed, which in turn damaged the motor and rendered the truck inoperable. And when illness struck Buxton, the fire engine sat idle. After pancreatic cancer took Buxton’s life, his family decided to give the vehicle to the local firefighters foundation. Their hopes were that the group could yet again restore the fire engine and return it to the streets of El Cajon for events and appearances serving the community.

Once the foundation had taken possession of the fire engine, board member Ryan Abell, an East County firefighter-paramedic for eight years, began overseeing the restoration project. His first request for fundraising assistance went out around East County about two years ago.

This has been a long road back for the beautiful classic truck.

How special is this vehicle?

It is a beautiful, shiny bright red fire engine. And once upon a time — actually, after arriving at the El Cajon Fire Department on June 7, 1950 — the truck provided rescue and fire response protecting East County residents. Although its history is still sketchy, according to Abell, he believes the truck was sold at auction sometime during the 1970s.

Abell described what the project is about. The El Cajon Professional Firefighters Foundation was established as a 501(c) 3 organization around five years ago, to assist charitable endeavors that become near and dear to Heartland Fire & Rescue. Charities the group has supported include the Burn Institute, the Make-A-Wish Foundation, Octoberstache, and the Challenged Athletes Foundation. But the organization wants to do more. The restored El Cajon fire engine will play a key part in expanded charitable and community service outreach.

These restoration efforts have been underway with significant episodic progress for almost two years. An exact replica motor arrived in November 2015, and Abell began serious community outreach requesting donations of money and labor for the project. Donors did step forward, and mechanics with skills in classic vehicle restoration volunteered their time and talents as well.

One of these volunteers agreed to show off the beautiful fire engine about two weeks before the Mother Goose Parade. Dwight Brinkerhoff of Horizon Automotive in Lakeside was working on some final touches to get the classic fire engine parade ready. He was replacing radiator hoses that day.

A new radiator had been custom made for the vehicle a few months earlier, Brinkerhoff explained. He test-fired the truck and got it running on Wednesday, November 1.

Have there been other challenges? “Finding a starter and rebuildable parts, like the water pump, were hard,” Brinkerhoff said. “I didn’t take it apart, so putting it back together was challenging but very fun. And there is a cute, inviting factor.”

He continued, “Thank goodness for the internet.” Brinkerhoff found and acquired parts from as far afield as Oklahoma. The project at times stalled over needs for more funding. Indeed, the vintage fire engine will still need donations for ongoing maintenance and vehicle costs. Interested potential donors may contact Abell at Rabell@HeartlandFire.net.

Brinkerhoff reflected on how the fire engine served the area decades ago. “Firefighting was much different back then. There would have been 12 to 14 guys in the fire engine, some hanging off the sides.” And now, this beautiful classic vehicle will be serving the community again in a different way.

So, there has been a storybook ending for the beautiful, shiny bright red fire engine.

With a nod of appreciation to the original, you might even call this the story of the little red fire engine that could.

The City of El Cajon