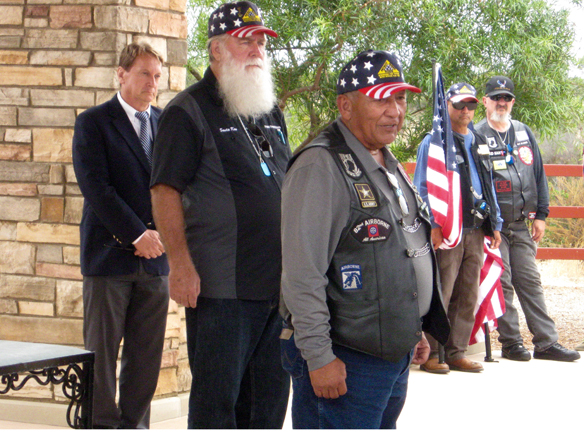 Midday this Thursday, the bikers began gathering at the designated staging site, the distinctive rumble of their motorcycles filling the air. They come together often, like on the previous Friday, when many of them rolled out to honor Marine Corps Sergeant Chad Jenson and support his family. Laid rest at Miramar National Cemetery, Sergeant Jenson was one of the 16 who perished when a Marine Corps KC-130 crashed during a routine flight on 10 July.

Midday this Thursday, the bikers began gathering at the designated staging site, the distinctive rumble of their motorcycles filling the air. They come together often, like on the previous Friday, when many of them rolled out to honor Marine Corps Sergeant Chad Jenson and support his family. Laid rest at Miramar National Cemetery, Sergeant Jenson was one of the 16 who perished when a Marine Corps KC-130 crashed during a routine flight on 10 July. Responding to the mission announcement, the bikers and others were honored to show their respect for Sergeant Jenson’s service to our nation.

The announcement for this Thursday’s mission was like countless others, providing the necessary information for yet another mission. The announcements are numerous, often several per week, and result only from a family’s request. Appropriately titled missions that Patriot Guard Riders (PGR) perform selflessly for members of the military who die on active duty or for veterans who have drawn their last breaths.

The mission announcement for this Thursday was different, because it was for one of their own.

“The family of Bill “Smoke Stack” Foerschler invited the Patriot Guard Riders to be present to honor this hero for his service to his country. It is with heavy heart and boundless reverence that we do so. Billy Richard “Smoke Stack” Foerschler, 72, proudly served his country in the US Navy where he achieved the rank of Machinists Mate 3rd Class (MM3). He served four years active duty (1964 – 1968) and 2 years in the reserves (1968-1970). He was deployed to Vietnam. After the military Bill worked for DOD Navy FTSCPC for over 40 years. He enjoyed sailing his 30 ft. Catamaran in ocean races and against different yacht clubs. Bill’s second favorite activity was riding his Goldwing. He was a member, and Road Captain, of Gold Wing Road Riders Association (GWRRA), and he enjoyed his membership in the [American Legion Riders] ALR. Bill started the Veterans Without Family missions in San Diego, first at Fort Rosecrans then Miramar National Cemetery where he could be found every Tuesday. With at least one mission per week, Bill was one of the most prolific Ride Captains [RC] with the SoCal PGR. As an RC, a friend and a brother, he will be missed.”

He was a fixture with the PGR for years, both as a mission participant and Ride Captain (the individuals who volunteer to work with the family and others to plan and lead each of the missions). In this role Smoke Stack was probably best known for the aforementioned “Veterans Without Families” missions he led for years.

As sad and tragic as it may sound, all too often when a veteran is laid to rest, there are no family in attendance. Perhaps it was a matter of cost and/or distance that prevented family members from attending. Or maybe there were no surviving family members. Whatever the reason, no one other than a military Honor Guard would be present when these veterans were being laid to rest. “Smoke Stack” just could not let that happen. Leading the participating PGR and working with the military Honor Guard, he ensured his fellow veterans were laid to rest with the solemn dignity befitting one who has served his or her nation with honor. He embodied the PGR creed, “Standing for those who stood for us.”

Smoke Stack was also known for his perpetual smile and easy laugh, with unfaltering dedication to his nation and those who are serving and have served her. It is likely impossible to tabulate how many missions in which he rode over the years. So, when he passed, it rent a large hole in the fabric that is the PGR community. It was time to honor one of their own.

This mission for the Patriot Guard Riders was no more important than all those other missions they support, week in and week out. They are missions that bring out a handful to hundreds of riders’ depending on the day of the week and other factors. Regardless of the number of riders who participate, the importance of honoring the serviceman or –woman is uppermost in their minds. Arriving on various motorcycles, they were joined by bikers from the American Legion Riders (ALR) and Gold Wing Riders (GWR). And “Smoke Stack” was a member of all three organizations, an unusual occurrence. Forming up at El Cajon Mortuary & Cremation Service. Their ultimate destination was the Miramar National Cemetery.

Most of whose forming up on Thursday were veterans, enlisted to senior officer, but by no means were they all. Some are simply American patriots who give of their time to honor those who serve and have served. The customary leather and denim vests served as walking billboards, with patches declaring military history (when appropriate), exclaiming patriotic sentiments, and (in many cases) highlighting affiliation with the PGR, ALR, or GWR. The most common patch, by far, was the American flag, followed by a patch indicating in which branch of the Armed Forces the individual served. But there was a missing presence that morning, notable because of the absence of Smoke Stack, his vest, his smile, and that distinctive cap he wore.

Upon the appropriate command, the bikers formed two lines and presented arms, raising their American flags in tribute to a fallen friend and veteran during the dignified transfer of the urn to the motorcycle trailer. Smoke Stack was about to take his final ride. After forming up, the procession proceeded to the Miramar National Cemetery. Leading the procession was a Missing Man formation, comprised of fellow bikers.

At the cemetery, another flag line was established, as so many others have been over the years. Flags were raised in salute. The United States Navy provided military honors. Taps was played. And in tribute to one with whom they have worked during the Veterans Without Families services, six soldiers from the U. S. Army Honor marched up and saluted the urn. This was a most unusual and touching act, honoring a Navy veteran. After the soldiers marched off, many of the bikers approached the urn, halted, saluted, and touched the urn, bidding a personal farewell.

In the end, one of their own received the honors he earned as a sailor who served his nation. It may have been an illusion, but it seemed his fellow veterans and bikers stood just a little bit straighter, with perhaps a little moisture at the edge of their eyes as Taps sounded.