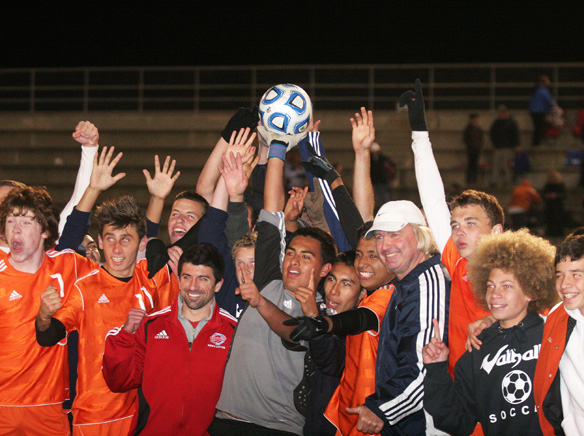 The Valhalla High School boys soccer team has proven it can win marathon matches, now the goal for the Norsemen is to go the distance by qualifying for this weekend’s San Diego Section Division II championship match.

The Valhalla High School boys soccer team has proven it can win marathon matches, now the goal for the Norsemen is to go the distance by qualifying for this weekend’s San Diego Section Division II championship match.

Valhalla, braced by a pair of penalty kick shootout victories, advanced to Wednesday’s semifinals against fourth-seeded Scripps Ranch. The winner plays in Friday’s championship match at Del Norte High School at 11 a.m.
The Norsemen, seeded eighth in the 12-team division, kick-started its playoff odyssey by defeating Mesa League champion Hilltop, 3-2, in a shootout tiebreaker in the opening round on Feb. 20. Both teams played to a 1-1 standoff through 80 minutes of regulation time and one 15-minute sudden-victory overtime period to require the PK tie-breaker to determine which team would advance to last Saturday’s quarterfinals.

Hilltop scored two minutes into the regulation portion of the match and the Lancers (9-8-6) looked to add several more goals in the first half if it were not for the standout play of Valhalla goalkeeper Dimas Orozco.
After weathering that early surge by the home team, the visitors equalized the match just seconds before halftime on a perfectly placed shot to the far post by senior Andrew Ogilvy.

The Norsemen maintained the momentum after Ogilvy’s goal and peppered Hilltop goalkeeper Adrian Zendejas with numerous excellent scoring opportunities in the second half.

But neither team’s offense could produce a winning goal in overtime.
Diego Verduzco, Justin Warner and Ogilvy scored in the PK shootout for Valhalla, and it was left to Orozco to make the game winning save on Hilltop’s Rigoberto Maciel to propel the Norsemen to the quarterfinals against top-seeded Mt. Carmel.

Team members mobbed Orozco after the game-winning save.
Valhalla (13-6-5) produced another stunner when they toppled the heavily favored Sundevils, 5-4, in the PK tiebreaker after once again playing to a 1-1 deadlock in regulation and overtime.