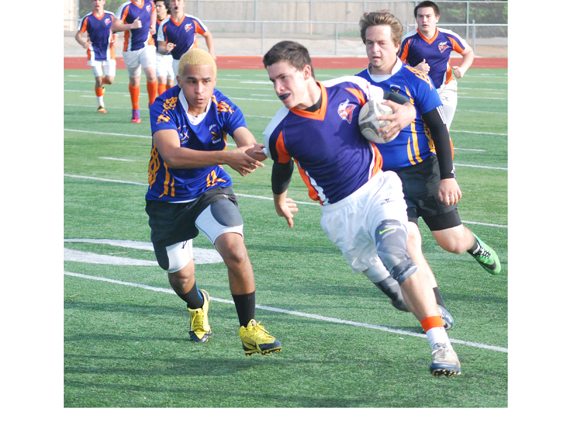 This season was the Norsemen’s first and the Valkyries’ second. May Harris, USA Rugby Trust board member and Valhalla team manager said she thinks hosting tournaments will raise the sports visibility.

This season was the Norsemen’s first and the Valkyries’ second. May Harris, USA Rugby Trust board member and Valhalla team manager said she thinks hosting tournaments will raise the sports visibility.

Primarily populated by the players’ families, the crowd was treated with an action-packed day highlighted by the post-tournament celebration. Rather than starting a brawl, bowl-winners Valhalla, plate-winners Mira Mesa, Alta Vista and San Pasqual embraced the cup-winning Rancho Bernardo. A few players even whipped out their phones to take selfies. Not wanting to be left out, the Valhalla girls’ team sprinted in from the sideline to showcase its second place trophy. Rancho Bernardo junior Nathan Nichols said it was an experience unique to rugby.

“Maybe on the field we hate each other, but then after we eat with each other (and) hang out,” he said. “It’s a big brotherhood, there’s no beef outside the field.”

Nichols was instrumental in the Broncos’ 24-0 victory over Alta Vista in the finals. He took a quick pass out of a scrum and powered his way through a tackle at the goal line to score the try and take a 7-0 lead after a successful conversion. Nichols also sealed the win with excellent dummy (rugby-speak for a fake lateral) that helped him blow past Alta Vista for the final try of the game.

East County probably would not have hosted the tournament had Harris’s daughter, Haley, not pestered Valhalla’s administration to help her start the team.

Without recognition from CIF, Valhalla classifies rugby as an ASB club. Rugby’s existence as a rouge sport, however, allowed for several other unique situations.

In the bowl-championship game, Carlsbad’s forfeiture left Valhalla without an opponent. Rather than simply accepting the award for 5th place, larger tournaments like the Sevens World Series traditionally send the top two finishers in each group to the cup tournament, the middle two to the plate tournament and the remaining teams compete for the bowl, so, in the spirit of tradition, the Tribe Rugby Invitational cup, plate and bowl were awarded to first, third and fifth, respectively. (Instead of first, second and third) The Norsemen faced “The Barbarians,” a spur-of-the-moment side featuring primarily Mira Mesa and San Pasqual players. Valhalla, behind two tries from junior Dante Carnessale, defeated the Barbarians, 22-10.

Several Valhalla players were also added to Rancho Bernardo’s and Alta Vista’s rosters for the finals. Valhalla junior Malik Fanua-Perrone said he did not hesitate to play the extra game.

“I filled in for one of the other teams because two players were injured,” he said. “One of the coaches asked me if I could fill in for the team… I didn’t mind because I love rugby.”

At the high school level, largely because of roster sizes, the girls play sevens while the boys play with full 15-man rosters. Haley’s father and May’s husband, Eric Harris, coaches the girls’ rugby team and said recruiting players for the fledgling program was difficult at first.

“It was basically a poster, flier and morning announcement campaign,” he said. “The other recruiting adventure this year was that all of the freshmen played two weeks of rugby in P.E.”

Although Rancho Bernardo and the Mira Mesa girls’ team, walked away with the tournament cups, the post-game celebrations and camaraderie are what will draw more potential athletes to the sport, said Fanua-Perrone.

“It’s a sport played by gentlemen,” he said. “We play like savages on the field, but after that we’re all brothers.”