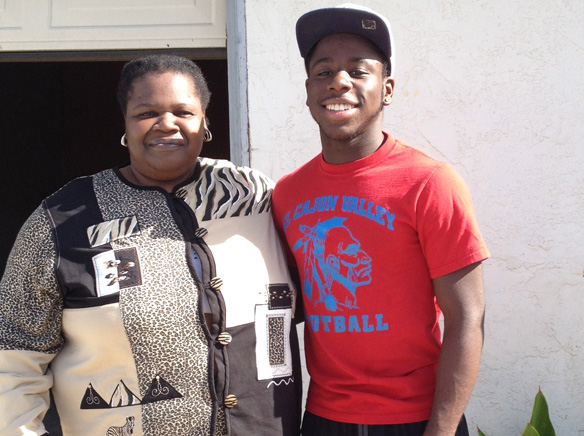 Some say when life hands you a bag of lemons make lemonade and that is exactly what El Cajon Valley High running back, Matthew Shearin has done thus far. At one point the star back led the Grossmont League in all-purpose yards, until a knee sprain occurred in week six in a 46-0 loss against Monte Vista.  He was sidelined for two games.

Some say when life hands you a bag of lemons make lemonade and that is exactly what El Cajon Valley High running back, Matthew Shearin has done thus far. At one point the star back led the Grossmont League in all-purpose yards, until a knee sprain occurred in week six in a 46-0 loss against Monte Vista.  He was sidelined for two games.

Shearin was born in Yuma, Arizona. He moved around quite a bit with his mother, Wyanett Powell. His mother has been a single parent, raising Matthew into a fine young man, the best she could.

Shearin has only spoken to his father at one time, at the early age of 4. He has yet to hear from his father.

Matthew was also separated from his mother for a short time, as she was having personal issues she had to correct. He grew up in a very tough environment as a young boy,

“But mom always did her best to take care of me,” Shearin stated.

“I didn’t really start to get into football, until I played one year of Pop Warner in fifth grade. I have played more years of basketball, which is one of my favorite sports,” said Shearin.

Shearin moved to California four years ago, with his mother and 6-year-old sister, Layzsa Powell. They chose to relocate to El Cajon, California since Matthew’s uncle had already lived there for years, and offered to help his family get back on their feet and headed in the right direction.

Matthew attended one year at Cajon Valley Middle School, and had made several friends, as is to be expected with his outgoing personality. When it came time to make a decision on what high school to attend, Matthew had a lot of input from friends and family.

“I had made a lot of friends who ended up attending Granite Hills High, and then there was El Cajon Valley High, which was closer to my home, and my uncle had attended there.”

“I had heard plenty of bad reviews of El Cajon Valley High but I wanted to play football, and it was close,” he said.

“It was time to get focused on football, and my academics,” said Shearin. After four years of being without his mother, they were reunited in El Cajon. “I wanted to create a shift, and lead by example for my 6-year old sister, who is going on thirty,” Shearin laughed.

Although his football team has struggled, Shearin has put up impressive stats, which he is not concerned with, as much as helping his team win. The El Cajon Valley Braves finished the regular season 2-8 overall, 0-4 in league, and were destroyed in the opening round of the SDCIF playoffs to Mater-Dei Catholic, 55-7.

Shearin finished the regular season in second place in the Grossmont Conference with 183 carries for 928 yards, an impressive 5.1 yards per carry, 11 touchdowns and averaged 116 yards per game.

Shearin is an honor student with a current 4.56 GPA.  Although he has a year left at El Cajon Valley High, the letters are already pouring in from many colleges and universities.

“I have never been on a plane or a boat. I have to get out of here,” Shearin said. He continued about the paradigm shift, looking to major in Civil or Electrical Engineering, and taking care of his mom.

So far, he has not received any football scholarship offers, however Yale, Harvard, Princeton, and USC have contacted him.

“I don’t want to play NFL football, but get into a great academic school and take care of Mom.”