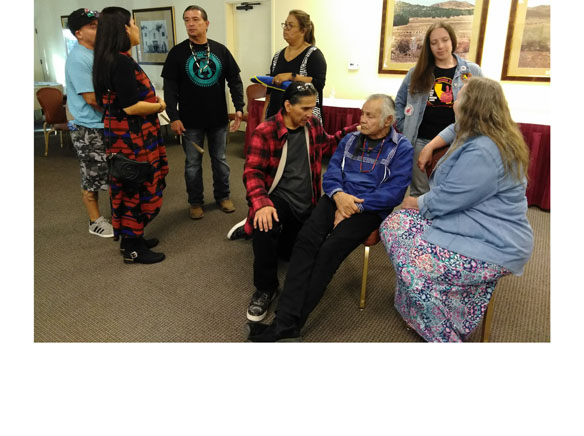 What started at Standing Rock when many Native American tribes gathered together to protect the land and the water from Dakota pipeline it was only the groundwork for a dream of unity in diversity that transcends borders, cultural divides, races, and all other differences among the people of this land.

What started at Standing Rock when many Native American tribes gathered together to protect the land and the water from Dakota pipeline it was only the groundwork for a dream of unity in diversity that transcends borders, cultural divides, races, and all other differences among the people of this land. Barona Band of Mission Indians hosted a gathering last Sunday at the Barona Clubhouse in Lakeside, inviting tribes from all of the country to “create a networking system that can’t be suppressed” to build a future for our children based on “solidarity among all people.”  In that same spirit, the highlight of the day was the presence of Fred Short, 71 years old Sundancer and martial artist, one of the oldest American Indian Movement (AIM) spiritual leaders championing for human rights since the inceptions of this movement, five decades ago.

Short told personal stories and also the history of the movement, taking part in ceremonial songs and drumming rituals and waiting behind after the gathering to take pictures, warmly shake hands and share his teachings one on one with the community. “I was invited here to come like a storyteller, “ said Short, adding that this is just the first event out of hopefully many more to come, “bigger and bigger. Fifty years ago we weren’t able to sing our songs, talk our languages, do these dances. Standing up and telling the government that we do have our ceremonies and our own religion, now we made it part of the Constitution.”  Asked how does one become a teacher like himself, Short encourages to “taking your time when you’re young and learn these songs and dances, participate in events, like sun dancing. You know, I am a Sundancer. “

The gathering started with an opening prayer by Councilwoman Melissa Donayre followed by the welcoming message from Bobby Wallace, National Chief of the Longest Walk and a tribal member of the Barona Band of Mission Indians.

Stanley Rodriguez spoke in his native language and taught few words. Rodriguez is a tribal member of the Iipay Nation of Santa Ysabel and a counselor in drug and alcohol addiction, with a PhD in educational leadership. “There are things going on with the presiding administration and it appears to be hyper conservative and very reactionary. The only way we are going to survive this is by coming together and supporting each other.” Rodriguez believes the current situation is similar with the historical times of foreign invasion causing the loss of many of the tribal members. “First came the Spanish, then the Mexicans. Now they are doing it in a different way and we are bringing to light the importance of being educated, aware and active.“

The tribes are planning to “meet more and more often. You know, our strength comes from our diversity and from all of us coming together,” continued Rodriguez, informing that the tribes will stand with the Chicanos during the protests announced by neo-Nazis and white supremacists groups at the Chicano Park on Feb. 3. The gathering is readying spiritual leaders to counteract with peaceful prayers.  As Wallace added, “a way of being effective is having a good planning, staying strong as one and pressing on.”

The agenda for the day included discussions and counseling on drug and alcohol abuse and domestic violence issues that affect the Native American communities. There were talks about preparations for this year’s Longest Walk from San Francisco to Washington, with worldwide participation, to raise awareness.  Short was introduced as “AIM Spiritual Leader staying on the Red Road for 44 years sober.” Short believes that coming to the community events helps with healing addictions. Wallace seconds that, adding, “You can’t stop somebody from using. But when somebody wants to quit, they need help. Cutting the programs for drug and alcohol addictions and domestic violence is not good for the people of this country.” Wallace concludes: “People need to stick together during these trying times, on The Turtle Island (Indigenous name for the USA). It’s our responsibility to make sure that generations after us can drink the water.”

The day ended with dancing and singing, while the bird singers lined up near an altar built by Ho Waste Wakiya of the Chumash and Hunkapa Dakota tribes. Wakyia is a priest who learned the ceremonial tradition from his father. He also holds a PhD in History. He describes the ritual in secrecy, while a group of bird singers along with Short and Wallace are sitting around a drum singing and playing in unison. The men are passing around small bowls of water, also sharing “wasna,” which means “all mixed up” in Lakota language, a medicine food. “There are different kinds of wasnas,” explained Wakiya. “What was in those particular bowls was honey, for the bear. It’s spirit food, that’s what it is, and chocked cherries and buffalo ground up and made into patties and cocked. All of this food and water we use to feed the spirits. So, after we are done praying, the spirits are in this food and now we are taking it into our bodies. “  Wallace added, “the bird songs come from this region and we offer that our sons first as a sign of respect to guest coming and then closing up with ourselves.”

Walkiya built the altar with many sacred objects, including a golden eagle and a bear “that came to me,” which translates into “I found them close to my house.” Nobody is allowed to take pictures of the altar or even give away the meaning of each ritualistic item, out of respect for the ancestors and the tradition. Wakiya said that the spirits would leave him and he would lose his power. His left hand is adorned with an incrusted Native Indian crown as a ring, his braided hair in place along with black clothing and silver belt buckle. The long, braided hair, wore by Short and Wallace and many other Native men, is a symbol of cultural resistance, as many of the tribes were given hair cuts during the decolonization and forced baptisms. Walkiya kindly shares a ritual of gratitude I follow closely to thank for a golden eagle feather that came my way, as the sun is setting in golden splendor beyond the mountains in Barona, the sacred land of the Kumeyaay, singing their songs of longing and belonging.