The Jan. 25 meeting of the county’s Traffic Advisory Committee included a recommendation for an all-way stop control at the Lakeside intersection of Marilla Drive and Westhill Road.

The TAC makes recommendations on regulatory controls such as stop signs, traffic signals, speed limits and parking prohibitions, but all TAC recommendations are subject to San Diego County Board of Supervisors ratification.

The county supervisors are expected to consider the all-way stop April 10.

Marilla Drive is a striped two-lane roadway which also has edge line striping. The street has 24 feet of travel width with a road bed ranging from 28 to 36 feet in width.

It is not classified on the mobility element of the county’s general plan, and its 25-mph speed limit is certified for radar enforcement.

Westhill Road, whose northern end is Marilla Drive, is also a striped two-lane roadway with 24 feet of travel width and a road bed; it is not classified on the mobility element and has no posted speed limit.

During the 36-month period from Sept. 1, 2015, to Aug. 31, 2018, three collisions were reported at the intersection including one which involved injury.

The statewide collision rate for vehicles entering similar intersections is 0.14 per million vehicles.

The collision rate for Marilla Drive and Westhill Road is 0.63 per million vehicles.

“This is a very, very dangerous corner,” said Debbie Shamp, who has lived on Westhill Road for 46 years.

Owens also lives in a house whose street is off of Westhill Road.

“What you’re looking at is the 810 accidents that didn’t happen,” he said.  “There are a lot of near-misses that don’t get reported.”

“Rolling out of the intersection at the blind corner you can’t see people coming down,” said Westhill Road resident Terry Burke-Eiserling.

The school district’s 40-foot buses are longer than the 20-foot truck Owens drives.

“You feel like you’re in a rocket ready to launch,” Owens said. “I have a hard time getting across the intersection.” 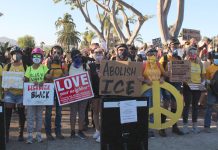 Recycled water is still a priority at Padre Dam