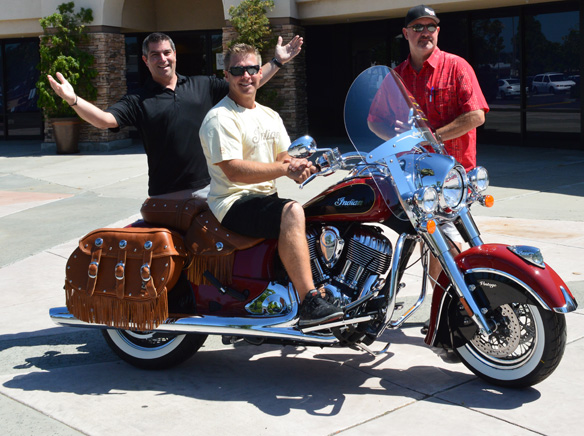 Since 1993, three East County businessmen set up shop in El Cajon and created the one stop shop and service center Motoworld of El Cajon. Selling the best in new and used motorcycles, ATVs, scooters, watercraft, utility vehicles and power equipment, Motoworld carries the best brands for the adventurous riders from Honda, Yamaha, Polaris, Victory and other major manufacturers.

Since 1993, three East County businessmen set up shop in El Cajon and created the one stop shop and service center Motoworld of El Cajon. Selling the best in new and used motorcycles, ATVs, scooters, watercraft, utility vehicles and power equipment, Motoworld carries the best brands for the adventurous riders from Honda, Yamaha, Polaris, Victory and other major manufacturers.

Glenn Bagge, Brian Juhnky and Jared Malmquist, have worked since then to create the number one dealer in San Diego, expanding to offer complete sales, service, parts, and everything that is needed to go with your motorcycle or other outdoor recreation vehicle.

But that was not enough. On Aug. 25, they branched off with a new business venture, selling one of America’s greatest classics—the Indian Motorcycle.

Now in addition to Motoworld, it has its own American made motorcycle center next door.

Already employing nearly 50 people to run Motoworld, this new business is bringing 10 more, and it is only the beginning of a greater adventure, said Bagge.

“To be in this industry and not jump when you get a chance to be a part of this legacy and heritage of Indian motorcycle that has been around since 1901 … it is the first American-made motorcycle,” he said. “They did great things in WWI and WWII. We jumped at the opportunity.”

Bagge said it was a bit scary starting another business venture, but it was something they had to do. It began with its soft grand opening on Monday, but Bagge said they have plans for a great event for the public for its official grand opening.

“I’ve already got a charity involved,” he said. “I want to do a ride benefitting that charity, getting riders to participate and do it like no other Indian dealership has ever done.”

He said they are planning very large, with giveaways, prizes, live music. “We are going to have a party,” he said.

“That is not a lot of money for an American-made piece of history,” he said. “And the quality, fit and finish and the power and the fun of riding these…I have ridden a lot of motorcycles. And when I rode these, just the different power plan, the Thunder Stroke 111 V-Twin engine that Indian put into play before they even had a bike to build around it is amazing. They worked from the motor out.”

Indian has had some bumps in the road over its history, like many companies have had, he said. They were very strong through the first part of the last century. But between 2009 and 2011 Polaris Industries bought the rights to Indian.

“Polaris is a $4 billion company that is on the gas,” he said. “Polaris is a company made in America from the beginning. It is a snowmobile and power sports company from way back, so they are vested in the heritage of what Indian is.”

Bagge said when he first moved to California, a young kid in his 20s, he lived at the beach. But as he got older, and his motorcycle career grew and his love to ride expanded he moved to East County.

“When you ride through the hills of East County, you are in heaven. We are East County boys through and through,” said Bagge. “And we are all three on site every day. I have learned that a lot of businesses can’t say that.”

Bagge and Juhnky live in Alpine. Malmquist lives in Ramona. But their passion for motorcycles lives in El Cajon.

Season of giving should not be season of scamming