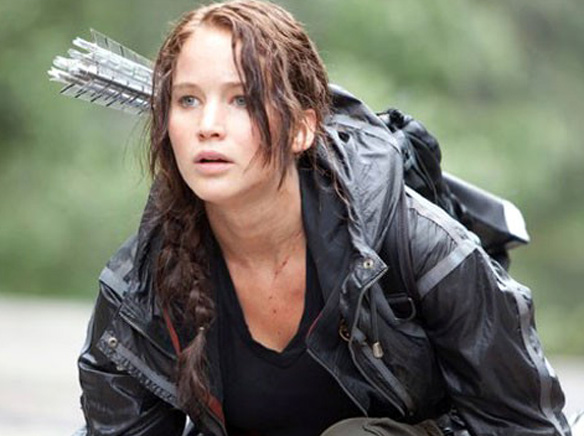 With a built-in audience of mostly 14-17-year old girls, director Gary Ross (“Pleasantville,” “Seabiscuit”) puts together a rather faithful version of the best-selling Suzanne Collins’ “Hunger Games” trilogy, telling the tale of a post-apocalyptic North America divided into 12 districts.

With a built-in audience of mostly 14-17-year old girls, director Gary Ross (“Pleasantville,” “Seabiscuit”) puts together a rather faithful version of the best-selling Suzanne Collins’ “Hunger Games” trilogy, telling the tale of a post-apocalyptic North America divided into 12 districts.

And while the film is definitely well-acted, decently-paced and competently-directed, the subject matter of children and young teenagers fighting one another to the death may lead some parents to think twice about bringing their own kids to the picture.

With the country having gone through a rebellion years before, the government has instituted a punishment of sorts to be inflicted on the treasonous districts. This rather bizarre action includes taking a young male and female from each area and forcing all of them to fight
to the death.

These Hunger Games, begun as punitive, have since turned into a media sensation, with celebrations and a highly-rated “reality” show to highlight the selections. Smarmy host, Caesar Flickerman (Stanley Tucci, “The Lovely Bones”), even does Ryan Seacrest/Geraldo Riveratype
commentary and interviews with the selectees.

Coming out of the most remote district (No. 12) is super bow hunter Katniss Everdeen (Jennifer Lawrence, Oscar-nominated for “Winter’s Bone”) and baker’s apprentice Peeta Mellark (Josh Hutcherson, “Journey 2: Mysterious Island”). The movie informs us that Katniss
volunteered for this punishment to protect her little sister, Primrose,who was originally chosen.

The movie also informs us that in the near future, names like Katniss, Peeta and Primrose,
will become commonplace.

In addition, despite an all-powerful police state dictatorship which can take rip young people from the arms of their families at will, the populace dresses like rejects from any city’s Gay Pride parade, with hairdos similar to the Whos of Whoville.

One cannot help but weep for a fashion future that makes the 1970s look understated and conservative.

Katniss and Peeta are soonwhisked off to the capital,where they meet their mentor, Haymitch Abernathy (WoodyHarrelson), the overbearing
chaperon Effie Trinket (ElizabethBanks, “Man On a Ledge”and looking like Johnny Depp indrag on the set of “Alice In Wonderland”)
and clothing designer Cinna (singer Lenny Kravitz).

They are also introducedto the producer of the HungerGames TV show, SenecaCrane (Wes Bentley, “AmericanBeauty,” “Ghost Rider”), as well
as the other “contestants,” eachwith their own special survivaland/or fighting skill.

About an hour into the movie,the games actually begin, with the kids going after one anotherwith swords, axes, scimitars,bows and arrows, as well asother instruments of destruction.

The quick-cut, hand-held“Cloverfield”-type camera work here diffuses some of the gore inthese sequences — a bit, but westill know what’s going on. The viewer will have to seefor themselves what happensduring these games, but a fewunexpected twists make the conclusiona real surprise (unless ofcourse, one has already read thebook — which, thankfully I hadnot).

Top-notch acting, especially from Lawrence, Tucci, Banksand Harrelson, and surprisinglyby Hutcherson and Kravitz, lift this genre over similar films such as the “Narnia” franchise,but below the “Harry Potter”and “Lord Of the Rings” series,however.