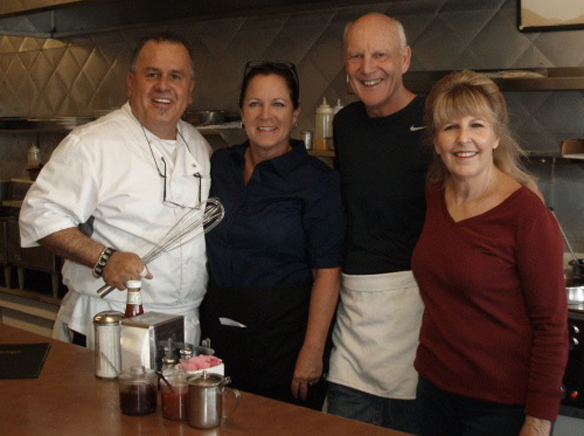 The only thing better than leaving behind a good legacy is seeing it prosper under someone as dedicated to it as you. For Lori and Bob Bailey, owners of The Food Factory on Broadway in Lemon Grove, 42 years in the service industry was when they decided it was time to hang up their aprons and move on. Purchased from John and Julie Farle in January 1973, what the Baileys had to sell was more than a business. It could not be turned over to just anyone.

The only thing better than leaving behind a good legacy is seeing it prosper under someone as dedicated to it as you. For Lori and Bob Bailey, owners of The Food Factory on Broadway in Lemon Grove, 42 years in the service industry was when they decided it was time to hang up their aprons and move on. Purchased from John and Julie Farle in January 1973, what the Baileys had to sell was more than a business. It could not be turned over to just anyone.

The Baileys listed their business, interviewed some prospects, but it was not until John and Lori Barrios contacted them that the Baileys knew they had the right people.

“John and Lori came in, and we thought, husband and wife, East County people, this works,” said Lori Bailey.

The Food Factory, or as it has been called in the past, “Mel’s Root Beer’” and “John and Julie’s” will now become “The Bleu Whisk Diner.” John Barrios brings diverse culinary experience to Lemon Grove. He began his work in the food industry in the 80s on private yachts. He worked as the chef in Tosca’s in Pacific Beach when gourmet pizza took off, and gained experience with corporate chains while with Outback Steakhouse. From 1998-2004, he was the executive chef at The Argyle Club in San Antonio—where he nurtured his love for the food of the Southwest, as well as modern Latin cuisine. In addition to the Southwestern flavors he found in the U.S. (New Mexico, Texas, even Las Vegas), he traveled to South America and Peru to get in touch with his roots and integrate those flavors into his food. A degree from Grossmont College in Culinary Arts tops off his background. His wife Lori, whom the Baileys affectionately refer to, as “the new Lori,” will work at the diner with her chef husband, just as “the first Lori” did so many years ago with her husband.

Bob Bailey was self-taught. The Baileys had owned a charbroiled hamburger drive-thru before opening The Food Factory. He worked in the food industry as a kid, but the Baileys were 23years old and without a great deal of experience.

“On the job training, kind of,” the Baileys described the beginnings of what they endearingly call a “mom and pop place.” Many of Bailey’s recipes will remain in rotation after the Barrios’ take over. The clientele comes for the comfort food, classics like hand and eggs, pancakes, French toast, tuna melts, Shepherd’s Pie breakfast on weekends, or regional favorites like frijoles de la olla. Some people come to The Food Factory twice a day. The idea of a dinner service at The Bleu Whisk Diner is being considered, so there may be an opportunity for three meals a day patrons.

The menu and the service are the two main factors in retaining the loyal clientele, attract more, and delight them all by incorporating new ideas. The Barrios and Baileys were all in agreement on this. Lori Bailey admitted that she and John had simply run out of ideas. But on the subject of menu ideas, John Barrios’ face lit up.

“His [Barrios’] first day on the job, he introduced John’s chicken soup, which was fabulous. It had potatoes, chicken, and vegetables, just a wonderful soup,” said Bob Bailey. Barrios echoed his predecessor when he added that all their daily soups (sauces, and chili) are made from scratch, and this will continue. Among some of the dishes and comfort foods to be introduced by Barrios are pierogis, stuffed cabbage in winter, spaetzle, posole, gumbo and jambalaya.

Though The Food Factory is past tense (the Bailey’s training of the Barrios officially ended Oct. 18), it had what John Barrios called a “world renowned” reputation. Lori Bailey told about the time her husband was catching a plane in Cologne, Germany. The taxi driver taking him to the airport recognized him, and ended up chasing him down at the airport, loudly proclaiming “Lemon Grove, California! The Food Factory!” People came to The Food Factory from all over—Nebraska, the East Coast, Denmark. And The Baileys knew them by name, even if they came in once a year.

It is not just a restaurant the Baileys moved on from, and it goes beyond livelihood. They impacted the lives of countless people by knowing what people wanted to eat, how they wanted it prepared, who those people were.

“We have a lot of Norms here,” Bob Bailey said, referring to the type regulars that get written into television characters.

It gets laughs from the old owners and the new, because it’s true. People need somewhere to go. There might be Food Factory type places throughout the city, the country, but in Lemon Grove, there were so many who came and went through the doors, returned over and over with the newer generation of those families.

The decor will get some updating, but The Bleu Whisk Diner will have aesthetic ties to its roots. The Barrios family members will come in and help out, too. It will be a family, serving families, making a new happy family of regulars and newcomers.

“What makes a mom and pop business work is that mom and pop are there. If mom isn’t there, pop is, if pop isn’t there, mom is, and when they’re both there, it’s the most successful,” said Lori Bailey.

The Food Factory staff will not change. They will become The Bleu Whisk Diner staff. Diana Lewis, who has been a server for 25 years, will remain as well as Kathleen Holt, who worked for the Baileys for five years. Carmen Vides and Juana Vargas, back of house staff who have eighteen years at The Food Factory combined, will also stay on board.

“It’s a transition not just of food, but of people,” Lori Bailey said. “We knew it was time for people like John and Lori, who were fresh. You know how sometimes television programs quit while they’re ahead? You need to at some point let someone else come in and put in excitement, energy and innovation, and I think they’re going to do it.”

The Bleu Whisk Diner can be found at 7914 Broadway in Lemon Grove.

Santee lights up for the holidays