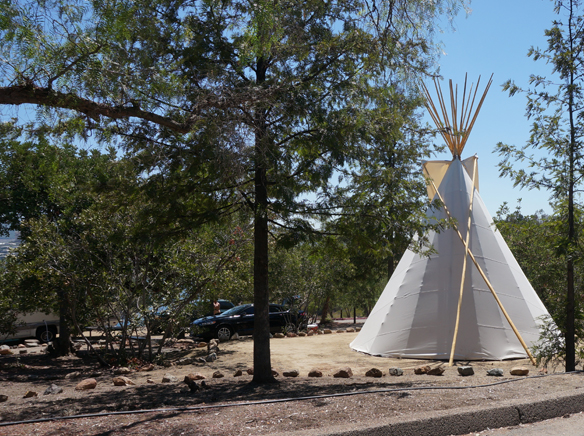 Something new has arrived at Lake Jennings Park: tipis. Or is it teepees?

According to Kira Haley, Lake Recreation Manager, there are actually three different and acceptable ways to spell the word: tipi, teepee, and even tepee. In any case, the word describes a cone-shaped tent, traditionally made of animal skins upon wooden poles. And you can spend the night in one at the Lake Jennings campground.

Something new has arrived at Lake Jennings Park: tipis. Or is it teepees?

According to Kira Haley, Lake Recreation Manager, there are actually three different and acceptable ways to spell the word: tipi, teepee, and even tepee. In any case, the word describes a cone-shaped tent, traditionally made of animal skins upon wooden poles. And you can spend the night in one at the Lake Jennings campground.

Now available for reservation, there will eventually be five of these unique, 27-foot tall native structures. At 20-feet in diameter, they are basically one big, open, communal space. A maximum of six people per tipi will be allowed. The cost will be $65 on weekdays (Sunday through Thursday) and $75 on the weekends and holidays. They will be available 365 days a year, as are all the camp sites at Lake Jennings. Kira expects the tipi sites to become very popular very quickly.

The idea behind the new additions is to add a little fun and diversity to the camp, as well as to boost revenue, a nearly overwhelming issue a year-and-a-half ago.

The lake’s camping and fishing operations were in danger of permanent closure in 2013. The main reason was an annual $200,000 revenue loss. But the public and members of the community voiced support for the lake and a plan was soon devised. It seems to be working, as fiscal losses have been cut dramatically and the topic of closure is, at present, off the table.

Kira and her position are a key part of the plan to enhance the Lake Jennings experience and bring more visitors into the park. She seems to be on the right track. A native of San Diego County, Kira grew up in La Mesa. She is a Certified Park and Recreation Professional. With nine years prior experience in the private country club business, Kira seems a good fit in a job that genuinely appeals to her. She is bright and enthusiastic, quick to give credit to her hard-working volunteers for taking care of the park and to her superiors for their support. She is very excited about the new tipis and enjoys talking about them.

The tipis are easy enough to spot and seem a natural fit. The wooden poles are made from hand-peeled pine in Montana. The Colorado Yurt Company is responsible for the canvas, which is both water and flame resistant (though no fire or flame will be allowed inside). The smoke flaps at the top (another distinguishing aspect of the tipi) can be closed in case of rain or left open to cool the interior.

Lake Jennings is truly a hidden gem of Lakeside. With its calm waters and quiet surroundings, you can easily believe you are far away from the hustle and bustle of city life. The lake as a lot to offer: fishing from the shore or a boat, hiking trails, picnic sites, and free wi-fi throughout the campground. Their 97 campsites are open every day of the year and include full and partial hookups, as well as tent-only sites.

You can also enjoy the man-made lake on a motorboat or paddleboats, and now kayaks are available for rent. The 10-foot long, single-person crafts include rod holders and compartments for tackle and/or snacks.

Speaking of lakes, another Lakeside water spot is about to reopen …

The return of San Vicente Reservoir

It’s been a long time coming: as avid local fishermen and women are most certainly aware, the San Vicente Reservoir is about to reopen to the public.

The popular fishing and boating site has been closed since way back in 2008. The San Vicente Raise Dam Project, part of the Water Authority’s $1 billion-plus Emergency Storage Project, raised the dam from its original 220-foot height by another 177-feet. The result has over doubled the water capacity for the reservoir. This is good news for water conservationists and water sports aficionados alike.

Numerous delays and postponements have caused a lot of frustration for folks who can hardly wait to use the newly improved reservoir and facilities. Additionally, there will be a lot of new rules and procedures, so doing some research and planning ahead will be a necessity.

San Vicente will be run on a reservation system and reservations are now open. Ticketmaster is the place to go – either online or by old fashioned telephone – to secure your permits. There are several options. For information, go to www.Ticketmaster.com or call them at (800) 745-3000. Another good site is the City of San Diego website at www.sandiego.gov/water/recreation/reservoirs/sanvicente.

The lake will be open Thursdays through Mondays, with fishing available all four days. Water contact sports such as water boarding and water skiing will be allowed Thursday through Sunday; this leaves Mondays will be for fishing only.

The official opening day is Thursday, September 22, 2016 – but it you haven’t made your reservations by now, you’ll probably have to plan for another day.

There was a bit of a rumor going around Lakeside that the old library building will be torn down when the new one is built and opened. This is not true. No decision has been made on the fate of the old building and none will be made for some time to come.

Plans for a new library are in the very preliminary stages. While some community fundraising is being done and some money has been set aside by the county, issues such as design, cost, and especially location are still a long way off. The best that can be said right now is that Lakeside will be getting a new library, but where and when have yet to be decided.

‘Alice in Wonderland’ bends the mind and original story