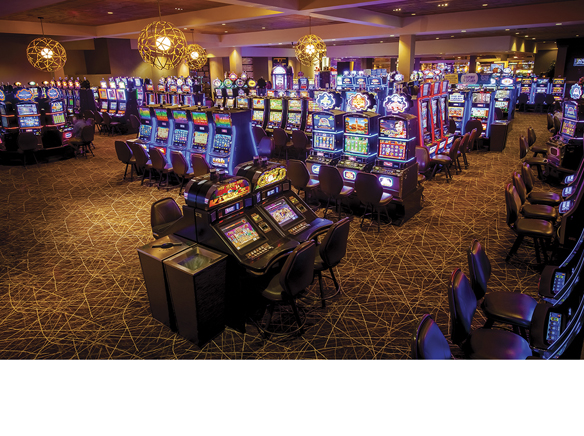 Even an enterprise as unique and impressive as a casino resort complex must at times capture the public’s attention and imagination. Sycuan Casino started a campaign to do just that on August 3, with a Branding Premiere introducing a burnished image for what event promoters referred to as “The Sycuan experience.”

Even an enterprise as unique and impressive as a casino resort complex must at times capture the public’s attention and imagination. Sycuan Casino started a campaign to do just that on August 3, with a Branding Premiere introducing a burnished image for what event promoters referred to as “The Sycuan experience.”

The new branding campaign is keyed around the theme: “Play. Win. Together.” Broad-based coordinated advertising in video, print, outdoor and radio media will further emphasize the casino’s growing role in supporting the local community, with a tagline, “In the heart of San Diego.” The theme song for the campaign is “One Minute More” from the Los Angeles-based duo Capital Cities.

Cody Martinez, chairman of the Sycuan Band of the Kumeyaay Nation, offered opening remarks welcoming those gathered in the casino’s Live & Up Close Theater and expressed excitement over improvements to the property that have already been made and those that are coming.

“Customer service is the most important value. We’ve let ourselves slip in that department. Our competitors noticed,” said Dinius.

Market research and focus groups both from inside and outside the organization provided information to guide the repositioning of Sycuan Casino within the area’s gambling marketplace. Roughly 10 percent of the organization’s staff members were surveyed. Dinius said the objective of the study was to identify the values driving casino patrons in their choices and behaviors. He reported that the background research had culled 12 values, which analysts clustered into the three areas of environment, loyalty and branding. The goal is better satisfaction of guests at the property.

One notable and noticeable enhancement in the casino’s “Sycuan experience” environment is expansion of no smoking areas and improved air quality through an advanced air filtration system on the main casino floor. Sycuan now hosts gaming patrons at the largest non-smoking gambling facility in San Diego. Lighting around the property is improved, and safety features for guest comfort have been increased.

Half of the casino hall was re-carpeted to remove lingering smoke odors. Elevators were replaced, which involved the inconvenience of 11 weeks of downtime.

Dinius continued, though, that the ambiance has to be about the reason people choose gambling from among entertainment options—which is to have fun. A new promotional stage next to the main casino entrance will feature each week’s giveaways, with music from live DJs and local bands. Soon to be added to the club’s GameDay Sports Bar & Grill will be a “relaxed atmosphere” Blackjack Party Pit for less intense gaming action than on the casino floors.

Dining was also identified as an important value to gamblers. More seating now graces the casino’s eateries. Other adjustments for diners at Sycuan will be theme nights in the restaurants and customizability to suit individual tastes. A mobile app will permit a quick turnaround from making reservations to sitting down to eat, while allowing patrons to easily resume gambling until the app informs them that their table is ready.

As for loyalty, Sycuan has boosted cash back rates for players and improved the quality of rewards. One woman in a focus group gave pointed feedback, saying, “I played $150,000 in this casino last year. Can’t you give me a prize better than a Foreman Grill?” Cars will be future prizes for winners. Free gift days will appear on the schedule. The Sycuan “Freedom Card,” formerly restricted to active-duty troops and veterans, has been expanded to availability to military spouses.

The casino has hired more hosts, for better “player development,” so that more one-on-one interaction occurs. This is intended to bolster “the Sycuan experience” for both employees and guests. Overall, the atmosphere within the casino is being transformed, lightened up, with increased energy to “set the stage” for “delivering the Sycuan experience.”

“This is really unique. We listened to our guests. And we came out with a compelling story. There are no gimmicks here. This is sincere. This is about who we are, about our heart, and about being in the heart of San Diego like we are,” he said.

Morales then introduced a video showing events during the four-day shoot for the campaign’s central televised commercial. Outside locations included San Diego beaches, the USS Midway Museum in the harbor, and the U.S. Grant Hotel downtown. Celebrity sports figures are featured, alongside Sycuan employees and Sycuan participation in charity events. Former Padres player Steve Garvey and NBA Hall of Famer Bill Walton were on hand at the branding premiere and available for photo ops with guests. The Padres baseball team mascot the Swinging Friar was there too, mixing with the attendees and encouraging amateur photographers in the crowd.

Eric Runningpath has worked at Sycuan for nine years. He now serves as a security officer. He is also a professional Native American dancer.

“I’ve been watching the changes as they’ve been made. I’m excited about what is happening. The new chairman deserves a lot of credit. I think the changes are going to be very good,” said Runningpath.

Sycuan Casino is located at 5469 Casino Way, off Dehesa Road. For more information is visiting online at www.sycuan.com.

My Turn with Assemblyman Randy Voepel