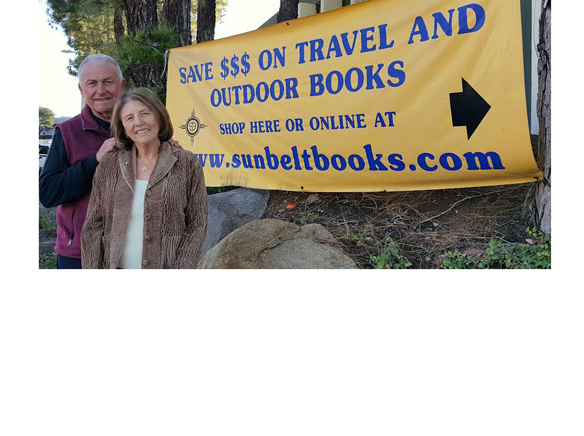 Have no fear, book-lovers and authors. Lowell and Diane Lindsay, owners of Sunbelt Publications in El Cajon, know that you missed their annual holiday party with its famous chili bar, but they have not disappeared from the book-publishing scene. Instead, they have made some winning changes for the coming New Year.

Moving just next door from their old unit, from 1256 to 1250 Fayette Street, the company will have half the space but twice the efficiency.

Have no fear, book-lovers and authors. Lowell and Diane Lindsay, owners of Sunbelt Publications in El Cajon, know that you missed their annual holiday party with its famous chili bar, but they have not disappeared from the book-publishing scene. Instead, they have made some winning changes for the coming New Year.

Moving just next door from their old unit, from 1256 to 1250 Fayette Street, the company will have half the space but twice the efficiency.

“The dust has not settled yet as we are busy trying to find a home for everything. It will probably be January before we are comfortably settled in. We will have an open house sometime towards spring,” said Diana Lindsay.

Sunbelt Publications will continue to work with the same kind of authors in the future as they have done in the past. Its focus will be on authors who enhance the knowledge of the Southwest region and celebrate the people, the land and its natural and cultural features.

The Lindsays themselves are long-time authors whose award-winning books include, “The Anza-Borrego Desert Region,” “Anza-Borrego A to Z: People, Places and Things,” and “Ricardo Breceda: Accidental Artist.”

The move entails some changes in the ways of bookselling that have occurred in the 30 years that the Lindsays have been in business. They had always wanted to focus on their own press along with distributing a few other publications that would complement their own books.

“But during the 1980s, the big bookstores began evolving and demanded products from local distributors, causing many of us to rise to the opportunity of greater sales by becoming also wholesalers–those who buy books from other publishers and resell them to retailers,” Lindsay explained.

Initially, wholesalers around the country were the warehouses for major retailers that were expanding rapidly. The chain retailers included stores like Waldenbooks, B. Dalton, Doubleday, Crown, Tower Books and Records, Brentanos, Borders, and later Barnes & Noble. At one point in time, Sunbelt Publications was carrying over 12,000 regional titles and had little time to think about its own publications. Then the large retailers began opening up their own warehouses; soon after, they began facing tough competition for retail dollars, especially when Amazon entered the scene.

Eventually many of the big box bookstores went out of business except for Barnes & Noble. Sales to Amazon has made up for some of Sunbelt Publication’s loss in sales, Lindsay explained, but the sales now are much better because Amazon and retailers are ordering their published and distributed titles.

“We also don’t have to deal with regular massive returns, which was one of the problems in dealing with the chain bookstores. Instead, we are now able to focus on what we always intended to before we got diverted from our original mission with wholesaling for the chain stores,” she said.

As a result, Sunbelt Publications no longer needs a lot of warehouse space, as the company only has to house its own books and distributed titles.

In addition to changes in bookselling, the world of publishing has evolved dramatically. No longer do publishers have to have a large print run. These days with new digital printing capability, publishers can do smaller press runs to test market sales of publications before committing to a larger press run.

These changes can actually benefit Sunbelt in some ways.

“We can now concentrate our sales time on our own published and exclusive distributed books rather than helping to market books that are not ours,” Lindsay said.

In addition, the money that Sunbelt Publications saves on paying for under-utilized warehouse space gives the company more funds to produce new product and to market them.

At the same time, these changes will challenge Sunbelt Publications because it will no longer have the luxury of storing slow or non-moving products.

“We will need to make sure we are using our new space as efficiently and economically as we can,” Lindsay said.

All these changes definitely affect authors, as well.

“Authors benefit by having our marketing department working with them to help potential buyers discover the book, organize events, and provide publicity sizzle,” Lindsay said.

“I’ve had the pleasure of working with Sunbelt since 2003, and have always appreciated the way Diana and Lowell have made me feel part of the family. Over the years, I’ve grown to appreciate how important Sunbelt Publications is to San Diego’s cultural identity.

“The books they publish and distribute are so wide-ranging that I’ve come to regard Sunbelt and the Lindsays as important assets to this region,” Innis said.

“Working with Diana and Lowell has not only been a pleasure—but a guarantee that a book will have the best possible quality and release. And this has given them an edge in publishing books focused on the American West.  Twenty years ago there were dozens of such companies.

“Now Sunbelt is just about it, and not only surviving but thriving,” said Clapp, author of several books, including “Gold and Silver in the Mojave: Images of a Last Frontier.”

For more information about Sunbelt Publications, go to www.sunbeltpublications.com or call 800-626-6579.