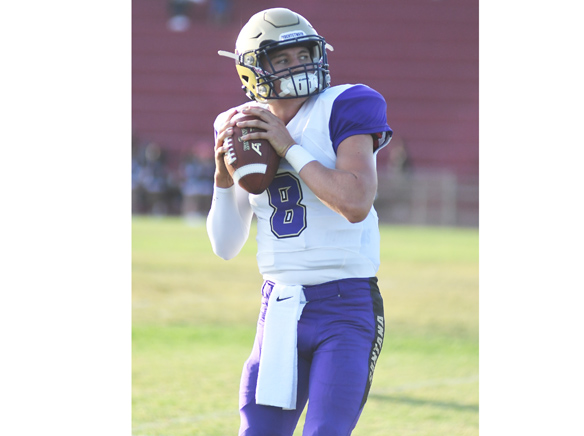 The Sultans enter the 2017 campaign in a bit of a “rebuilding year,” according to head coach Tim Estes.

The Sultans enter the 2017 campaign in a bit of a “rebuilding year,” according to head coach Tim Estes.

“We lost nine offensive starters off last year’s squad and six on defense but we’ve got our quarterback back, our slot receiver and our best linebackers, so that’s a really good thing,” explained Estes, who is in his sixth year as Santana head coach.

“The guys who are replacing the guys we lost last year — we had three 800-yard receivers — we definitely got a good group of guys who came up, and I think they’ll really contribute to the team.”

Santana racked up 36 passing touchdowns and 28 rushing touchdowns last season. In last Friday’s opener, the Sultans accumulated five rushing scores and three passing TDs – not too much of a drop-off in the scoring department.

“We’ll be pretty well balanced,” Estes explained. “Even though Josh (quarterback Josh Oedewaldt) threw for nearly 3,000 yards, we also had a 1,700-yard rusher (Bobby Wallace), so we were pretty balanced last year throughout the whole season. We hope to do that again this year.”

Ian Litten scored on a two-yard run to ignite the scoring for the visitors early in the game and teammates Colton Snipes and Davon Chestnut hauled in touchdown passes from Oedewaldt to lift Santana to a 21-0 advantage on the scoreboard midway through the second quarter.

The Sultans piled up an impressive 516 yards in total offense in the rout, including 233 rushing yards.

Odewaldt completed 20 of 30 passing attempts for 283 yards and three touchdowns. He threw one interception.

Chestnut had nine catches for 133 yards, including touchdown receptions of 16 and 10 yards.

Snipes hauled in a 10-yard scoring pass as the Sultans took an early 14-0 lead in the game.

The Sultans played well in the first half but allowed three second-half turnovers as Castle Park scored 13 of its 19 points after intermission.

Timmy Tischer was perfect on all eight point-after-touchdown conversions.

The Santana defense held the Trojans to 247 total yards, including just 87 rushing yards.

Genschaw led the Sultans with seven tackles while Kane and Dylan Haslick each turned in six defensive stops. Santana recorded five sacks, including 1.5 by Brayden Nieto and one each by Genschaw, Landon Wood and Luke Simanek. Jose Chairez was credited with one-half sack.

The Sultans had three receivers — all seniors – each total 800 or more yards last season. Kane and Chestnut are expected to help take up the slack this season.

“If we can stay healthy, I think we can score some points and keep people out of the end zone,” Estes offered optimistically.

Santana next preps for its annual crosstown battle against West Hills on Friday, Sept. 1. Kick-off is 7 p.m. at West Hills High School.

College football pitches a reverse, SDSU to play in fall after...