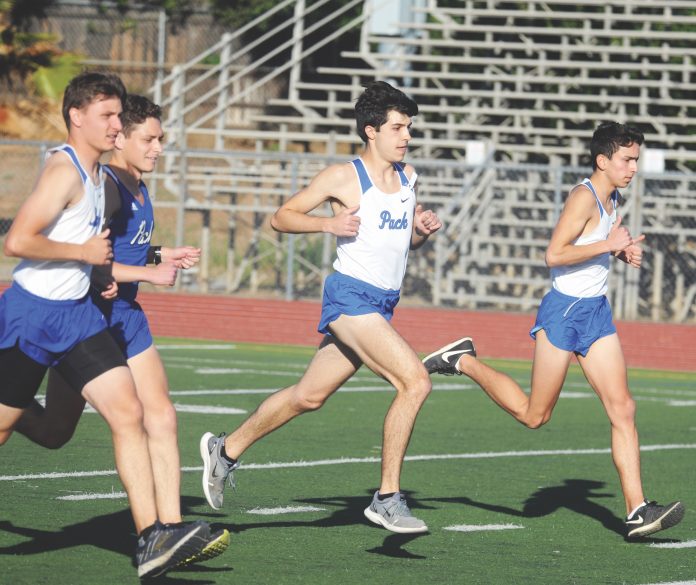 Steele Canyon senior Diego Lopez (13:16) won by a whopping margin of 45 seconds over sophomore teammate Bradley Bell (14:01) in the March 12 season finale. Senior Angel Arredondo was third in 14:06, followed by sophomore Juan Pablo Arredondo in 14:23 and freshman Collin Guffey in fifth place in 14:33.

The Cougars placed the top eight runners in the 2.55-mile race. Junior Mel De Alba-Ruiz (15:42) was the top finisher for Granite Hills in ninth place.

Lopez edged Grossmont’s Russell Blakely by one second to headline Steele’s one-point victory against the Foothillers. Grossmont placed three of the top four runners in the 2.35-mile encounter at Harry Griffen Park in La Mesa, though the Cougars countered with five of the top eight finishers to inch in front on the scoreboard.

Steele Canyon placed the top four runners, led by Lopez, against both Valhalla and West Hills.

The Cougars set the pace in the first dual meet of the season against Helix by placing the top six runners in the race.

Steele Canyon won the girls dual 16-46 over Granite Hills to wrap up the season. The Cougars paraded the top seven runners across the finish line, paced by senior Jennifer McCubbin (14:01). Sophomore Chase Diffenbaugh finished second in the 2.15-mile race in 14:41, followed closely by classmate Eryka Garcia (14:46) and junior Ariel Curiel (14:54).

Sophomore Kelly Cahill led the Eagles on the course in eighth place in 15:23.

Sophomore Graziella Mineo posted a winning time of 13:56 in the dual meet against Helix, finishing well over a minute ahead of Diffenbaugh in second place in the 16-deep race.

Grossmont senior Madeline Minutelli edged Steele’s McCubbin by 50 seconds to win their Feb. 19 duel. However, the Cougars recorded six of the top 10 finishers to post the three-point victory.

Steele Canyon’s depth proved to be critical in close matchups.

Valhalla recorded a 1-2 finish against the Cougars, paced by seniors Kate Baranski (13:15) and Peri Kraft (13:47) on the 2.15-mile course, but Steele Canyon responded to capture the contest with nine of the next 10 runners across the finish line.

Minutelli finished undefeated as an individual for Grossmont.